Why Warren Gatland is winning the battle of the basics

The World Cup in Japan represented the end of a lifetime for many a coach. In the southern hemisphere, all of the ‘big three’ head honchos of New Zealand, South Africa and Australia packed their bags and moved on.

In the north, four of the top men in the Six Nations stepped aside.

Among the farewells, by far the most significant was the end of Warren Gatland’s 11-year tenure as head of Wales.

When Gatland decided to return home to his home in Waikato, a huge amount of intellectual property left with both him and his long-time coaching companion, defence coach Shaun Edwards.

Gatland and Edwards were as inseparable as Jack Gibson and Ron Massey in league, or Rampaging Roy and HG in the world of sports comedy – always better together than apart.

They coached Wasps to the highest level of achievement in the English Premiership and Europe, they won the Six Nations championship on four occasions in 11 years, and took Wales to two World Cup semi-finals.

That era is now finished.

Edwards has left to be France’s defence coach in probably the shrewdest coaching pick-up of the entire post-World Cup remix. His impact was felt immediately, as a decisive factor in France’s opening round 24-17 victory over England in the 2020 Six Nations.

Meanwhile, the influence of Gatland’s 130 Tests in charge of Wales filtered thoroughly strongly in the Chiefs’ win over the Crusaders in Round 2 of Super Rugby.

Wales’ loss is most definitely New Zealand and France’s gain.

The most successful teams at provincial level are those most closely modelled after the requirements of Test rugby. In Super Rugby, that means the Crusaders from New Zealand (14 finals appearances in 23 seasons, with ten outright wins), the Brumbies in Australia (two wins out of six finals appearances) and the Bulls in South Africa (three wins between 2007 and 2010).

All of those sides share a common theme on the playing field. Set-pieces that are anywhere between sound and dominant, unrelenting defence and an accurate kicking game. Above all else, they are technically proficient at all of the contact areas.

The Brumbies have never been more talent-laden than their counterparts in New South Wales and Queensland, but they produce consistently better results because of the way they are set up to play. Even in the current season, they are already the only unbeaten side in the Australian conference.

Among the young Australian number 10s who have emerged from that outstanding Junior Wallabies team from 2019, Noah Lolesio is edging ahead of Will Harrison at the Waratahs and Isaac Lucas at the Reds. It is not because he has a better skill-set than the other two, but because he plays in a team where he is required to play a game of Test match maturity.

On Saturday against the Rebels, Lolesio and his number 12 Irae Simone navigated the Brumbies up and down the field with an effective kicking game, and Lolesio was both sound and aggressive in contact.

Solid fundamentals are everything, and the detail of those fundamentals needs constant attention and refinement.

Without Gatland and Edwards, there is already an uneasy sense that Wales are moving too far away from the basics of the game. In their 24-14 loss to Ireland, they recovered none of the contestable high kicks which they launched into the iron-grey Dublin sky, and they gave up no fewer than six turnovers in their own 22.

Where Wales had offloaded 30 times during their 2019 Grand Slam success – at an average of six per game – Wayne Pivac’s side attempted to pass in contact on a massive 22 occasions against the men in green.

Even one of those stats would have been unthinkable in Gatland’s time, and it would not be a surprise if Pivac is visited by the admonitory ghosts of Christmas past in the days and weeks to come. It will be a steep learning curve for him and his coaching group if that performance is repeated in the remaining three matches.

Meanwhile, Warren Gatland’s charges met the Crusaders at FMG Stadium in Waikato fielding four All Blacks to the Crusaders’ eight. After a rocky opening in which they conceded two tries in the first 14 minutes of the game, the Chiefs locked their defence down, giving up only one solitary penalty goal in the remaining 66 minutes.

Aaron Cruden and Damian McKenzie employed a sensible kicking game to pin the Crusaders in their own half and the Chiefs’ back row, containing three natural opensides in Sam Cane, Lachlan Boshier and Mitch Karpik, swarmed to the tackle ball. By the time the final whistle blew, the Chiefs had shut the Crusaders’ attack down and Boshier had won six turnovers.

So how has the transformation happened so quickly? How has the Gatland mindset become the Mooloo mantra, against a Crusaders team that prides itself on winning the battle of the basics?

The key to the Chiefs’ success was Gatland’s relentless pressure defence policy, all the way up and down the field. Every territorial gain was dearly bought for the Saders, and there were no easy outs. Here is one early example, split into two parts:

The men from Christchurch are attempting to run the ball out of their own 22, but there are no easy metres on the outside against a defence featuring the three opensides plus outside centre Quinn Tupaea. The three breakaways can run towards the far sideline evenly without leaving any gaps, freeing Tupaea to close in and make the tackle.

At a critical moment we see the basic defensive triangle with Sam Cane at its tip and Karpik and Boshier bookending him. Cane will make the tackle, either Karpik or Boshier will go to work on the deck afterwards: 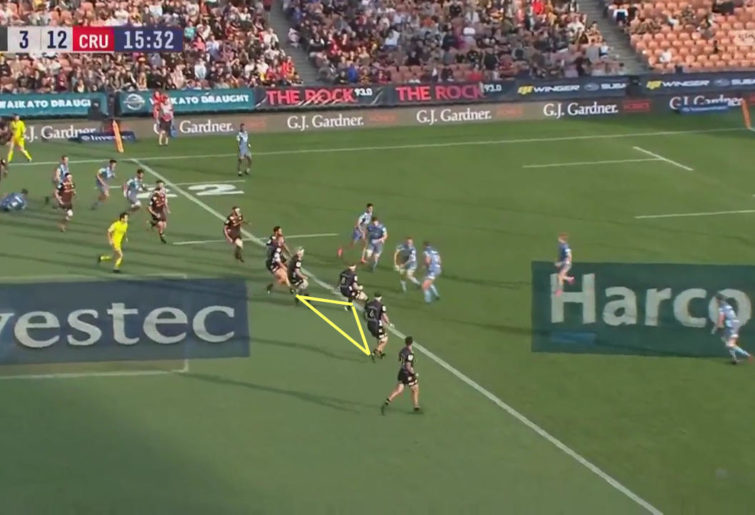 At the end of this play, Boshier moves in to pressure the tackle ball. On the next phase, it is Karpik:

It is worth looking at the defensive detail which forces Scott Barrett back into Karpik’s grasp: 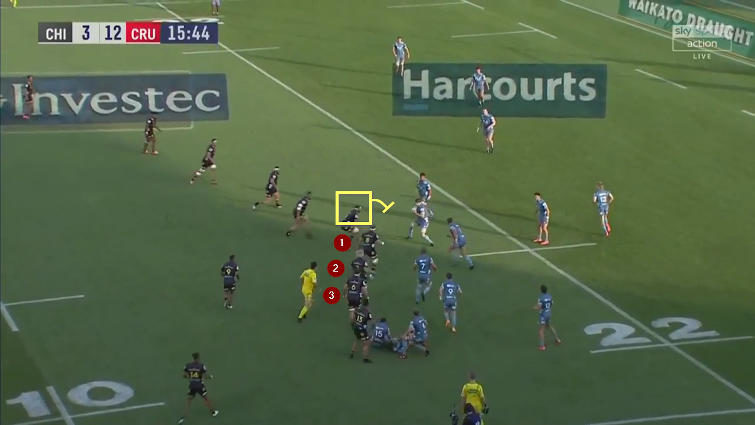 The tackler at the tip, Tyler Ardron, ensures he is positioned on Barrett’s outside shoulder, forcing him to take a step inside.

When he takes that step, all three of the Chiefs’ main on-ballers are waiting for him, which means there will be another difficult contest at the tackle, and more pressure heaped on the Crusaders’ scrumhalf when he goes to clear the ball.

The end product is a Chiefs turnover just outside the 22m line in centre-field.

A similar sequence occurred midway through the second period:

Tupaea rushes up to force the play back into the arms of number 6 Boshier, then a rush by Aaron Cruden sets up Karpik for another on-ball attempt. On the next phase, Cane forces the ball-carrier to take that fatal step inside, and Boshier has already recycled himself back into a position where he can complete the turnover:

In the final 15 minutes, Boshier broke his chains and ran amok, winning another four turnovers on the ground to put a conclusive stop to any Crusaders comeback:

The principles are the same in all three examples. The highest defender upfield is forcing the ball-carrier to cut back inside, and the man waiting for him is the Chiefs’ best ball-poacher on the deck!

At some critical moments, the Chiefs also won the battle of the angles at the offensive cleanout too. Here is Boshier again, dumping big Tom Sanders on his backside with the removal of the match, and creating a quick ruck for Brad Webber:

That slightly offset, angled cleanout can also create an attacking opportunity directly by clearing a path at the side of the ruck:

Boshier takes Crusaders number 13 Braydon Ennor all the way to the centre of the ruck, exposing the narrow side for Webber to take advantage of a temporary advantage in numbers and make the money-pass to wing Sean Wainui: 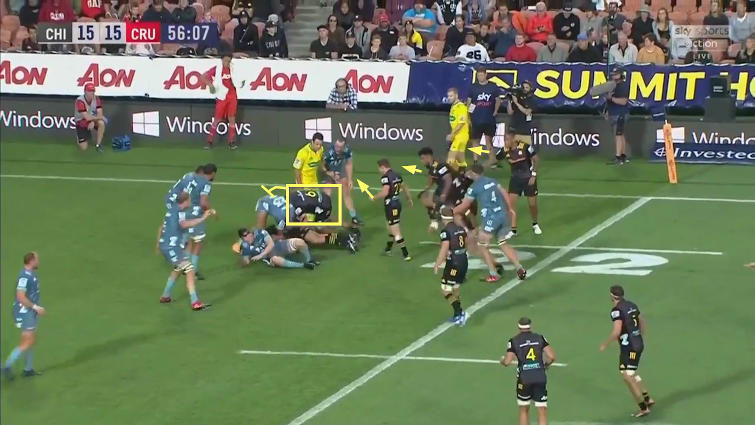 Summary
The best coaches in the world teach the importance of sound fundamentals and seldom move far from that model.

It has certainly become the Mooloo mantra in the short time Warren Gatland has spent with the Chiefs. It drew an involuntary, visceral ‘Ooh!’ and an ‘Aah!’ from the crowd after every shot fired by Shaun Edwards’ French defence against England in Paris.

In their match against the Crusaders, Gatland’s Chiefs won the battle of the basics, adjusting their angles on the defensive line and in the attacking cleanout to give themselves the optimal chance of success on the following play.

On defence, that usually meant Lachlan Boshier picking up the pieces after another exposed Crusaders’ ball-carrier had been forced back to the inside. On the other side of the ball, it meant Boshier’s smart use of a cleanout angle to drive the defender in the direction needed to create a channel of attack.

Against Ireland, Wales appeared to lose touch with the fundamentals upon which Gatland and Edwards insisted. They did not apply the kicking game or the kick-chase effectively, they replaced contact skills with the offload and they gave up the ball too easily in their own end. It was not what we have come to expect from Wales at all.

In Australia, it is the Brumbies who play the brand of footy closest to the next level up, on the international stage. They do not always have the best talent base to pick from, but what they do makes for a consistently productive team. That is what is projecting Noah Lolesio ahead of Isaac Lucas and Will Harrison as a young 10 at present.

They say rugby starts with the grassroots, and how right they are. Not just with the club game and events for kids, but at the root level of the kind of skills which should never be forgotten, or underestimated – however far in the game you advance as either a coach or player. That is the naked, unvarnished truth.