The Brumbies and the Reds should provide most of Rennie's Wallabies

At last, some good news for Australian rugby.

The Brumbies totally out-played and out-powered an unbeaten Chiefs side coached by master coach Warren Gatland, breaking their 13-year hoodoo in Hamilton.

And the Reds, after a rocky but at times promising start to their 2020 Super Rugby campaign, smashed the Japanese Sunwolves 64-5 at Brisbane’s Suncorp Stadium in a ten-try, record scoreline of total rugby.

Aside from the sheer pleasure and relief the two victories provided for a jaded Australian rugby public, the wins were marked by dominating forward play and skilful and often powerful back play that gave a hope – perhaps even expectation – that the Wallabies might be stronger than earlier results this season have suggested.

The main point I would make here is that Dave Rennie needs to forget the Rebels and the Waratahs (including possibly Michael Hooper) as must-select players and look to the abundant talent in the Brumbies and the Reds for a new-look Wallabies side this season.

Take the situation of the halves pairing.

It seems obvious to me that the halves pairings of the Brumbies, Joe Powell and Noah Lolesio, and of the Reds, Tate McDermott and James O’Connor, are the way of the future for the Wallabies.

But not necessarily as their Super Rugby pairings. The Wallabies could start the more experienced Powell with O’Connor and use McDermott and Lolesio as backups.

But of all the Australian No. 10s we have seen this season, Lolesio looks to be the most likely player to become the next long-term Wallabies No. 10.

This assessment includes consideration of O’Connor too. O’Connor played splendidly against the Sunwolves, but there is not much more growth left in his game, whereas Lolesio looks to have a full range of skills and an attitude suggests that there is plenty of upside in the various skills he has to be developed.

For instance, he is extremely dangerous inside the opposition 22 with his speed (a crucial gift for a No. 10) and his toughness in offloading in the tackle when charging into the weak shoulder of a defender.

He doesn’t get flustered, has a deft passing game and, unlike O’Connor, is a reliable goal kicker.

Both Powell and McDermott have the advantage over the other Australian halfbacks, and their opponents on Saturday, of being high-energy players. 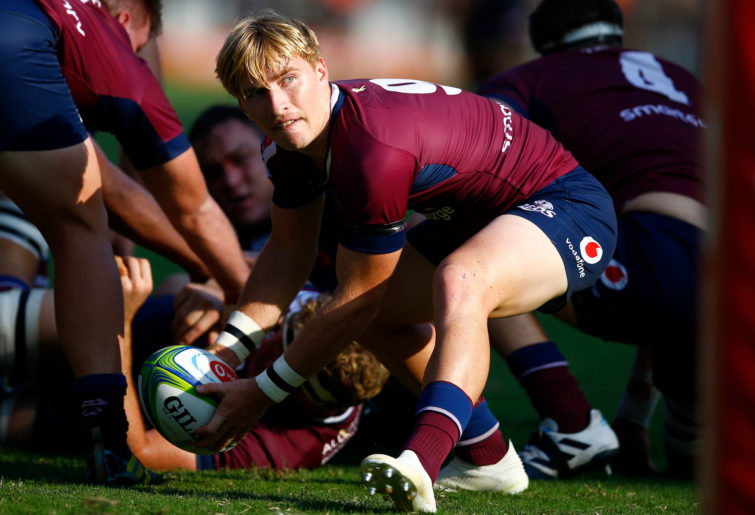 One of the banes of Australian halfbacks in the last decade or more has been their tendency to stand over the ball for an eternity before releasing it to the runners. This emperor penguin tactic allows the defenders to set themselves either to attack the one-off runners or to counter the box kick.

Neither halfback used the box kick much, a good thing as it is an overrated tactic now that contesting kicks can lead to yellow and red cards for charging players who mistime their leaping.

Usually the box kick just gives back the ball to opponents inside the kicker’s half. What is the advantage of this?

The Brumbies showed that Tevita Kuridrani is the block-busting defender and attacker that the Wallabies need at inside centre.

And Tom Banks is the devastating broken play runner, a wildcard attacker who can’t really be defended when he is on his game.

Banks out-played Damian McKenzie, who just could not make breaks against a well-organised, energetic and sometimes brutal Brumbies defence.

Before the match there was a great deal of talk about the Brumbies tendency towards playing what I described as rollerball rugby, an obsession on using the rolling maul as their main attacking weapon.

The Australian ran an interesting table that showed the Jaguares (26), the Chiefs (17), the Lions (17) and the Rebels (16) had used the rolling maul more or as often in their first three matches as the Brumbies (16).

The Brumbies, though, retained possession of the ball in all their rolling maul attempts, as opposed to the 88 per cent record of the other four teams.

Moreover, the Brumbies scored three times from rolling mauls, compared with the five times by the Jaguares, one try by the Chiefs and no tries by the Lions and Rebels.

What are we to make of these statistics?

The statistics suggest to me that the rollerball rugby approach to attacking lineouts near the opposition’s tryline is fool’s gold.

And what was interesting and encouraging (for those of us who deplore rollerball rugby) is that the Brumbies seem to have acknowledged this as they ran a number of variations to the rolling maul which the Chiefs found difficult to counter.

I am often critical of the game plans, usually of an ultra-defensive nature, that Australian Super Rugby teams tend to adopt, especially when they are playing away from home.

But, miracula dictu, the Brumbies came to Hamilton with a must-attack attitude and, more importantly, with the game plan and the players to put the plan into operation.

Surprisingly, it was the New Zealand team, playing at home, which played the defensive game.

I called Warren Gatland the ‘master coach’ earlier in this article. His record deserves this compliment. But he has a weakness in his method in that he often prefers defensive tactics over attacking methods.

The Chiefs started the game by kicking long, trying to pin the Brumbies inside their own half and, presumably, to thwart their anticipated rollerball game. Interestingly, this was the same exit play that France used in their Six Nations victory over Wales at the weekend.

The problem for the Chiefs with this position game tactic is that they ceded an aggressive attacking game to the Brumbies. When they tried to wrest back some momentum in the first half, they found this was beyond them.

The Chiefs’ negative tactics played into the hands of the energetic Brumbies runners, especially the former Warrior Solomone Kata, who proved to be too strong to handle for the smaller Chiefs defenders.

Perhaps the Chiefs were tired after their quick turnaround from playing the Sunwolves in Japan. Perhaps too the early loss of Luke Jacobson after ten minutes of play was a factor. But whatever the reason, there was no line speed in the Chiefs defence.

However, teams play as well or as badly as they are allowed to play.

The Brumbies played one of the best matches by an Australian side in New Zealand for some years.

It is not praising the Brumbies too highly to note that the manner of their victory, the way they fought back so effectively when the inevitable challenge from the Chiefs came, had strong echoes of the famous Wallabies triumph over the All Blacks at Perth last year.

The Sunwolves, like the Chiefs, had to come to Brisbane from Japan. But the Reds had to make the even more difficult trip from Buenos Aires.

There was only energy and intent, however, in the play of the Reds. All the promise they had shown in their first three losses on the road came together in a virtual explosion of running with the ball.

The Reds had squandered leads in their previous (away) matches against the Brumbies, the Lions in South Africa and against the Jaguares (with some contentious refereeing decisions). But all this was forgotten as they scored virtually at a run-a-ball-rate with 49 points in the first 50 minutes of play.

There was power and energy all over the field.

The Reds, for instance, are developing a loose forward brigade of Harry Wilson, Fraser McReight and the captain Liam Wright who could take the Wallabies through to the next two Rugby World Cup tournaments.

A standout young player for the Reds in the backs was the centre Hunter Paisami, who in his first home Super Rugby match was even more impressive than the injured prodigy Jordan Petaia in his first home match.

The Reds play a rampant Sharks side, with three wins out of four matches, at Suncorp Stadium on Saturday night. This will be a stern test for the Reds youngsters to show to real mettle of their talent.