After his most influential Super Rugby game for Melbourne since arriving late last season, five-eighth Matt Toomua says they “need a result” in Friday night’s clash with the Highlanders.

The Wallabies five-eighth returns to the starting line-up after missing last round’s 12-point loss to the Sharks with a minor groin injury. The defeat leaves the Rebels with a 1-3 start the season.

Toomua turned in a first-class showing the week previous in their victory over the Waratahs and they will look for a repeat performance against the Highlanders in Dunedin, where they’ve never won. They did however beat the Highlanders in their last meeting in round three in Melbourne last season.

Toomua gave credit to halves partner Ryan Louwrens but certainly put his hand up to wear the vacant Wallabies number ten jersey with his own game.

“I felt like I was able to have an influence on that game,” Toomua said.

“Ryan, myself and Dane (Haylett-Petty) probably adjusted to the conditions better than the Waratahs did in that game although that’s not something we will have to focus on tomorrow because there’s a roof.”

The 30-year-old was on the sidelines against the Sharks in Ballarat and said despite the loss, he rated it one of their better games.

Like his coach Dave Wessels said post-match, he felt they lost some key moments which proved costly.

“I thought it was one of our better performances of the season as the Sharks are a very, very good team,” Toomua said.

“A lot of areas such as our structured defence, it’s probably the best we’ve done so we will take that now because ultimately we need a result.”

The Highlanders similarly suffered at the hands of the Sharks, losing 40-22 in Round 2.

Wallabies hooker Jordan Uelese was named on the bench for his first match of the year after a hamstring issue.

“He’s trained well so hopefully it won’t take too long for him to pick up where he left off,” Toomua said.

Melbourne made no mistake with their second crack at super time, edging the Western Force 25-20 in their grudge match at Leichhardt Oval on Friday night.

‘What the hell was he thinkinig?’ 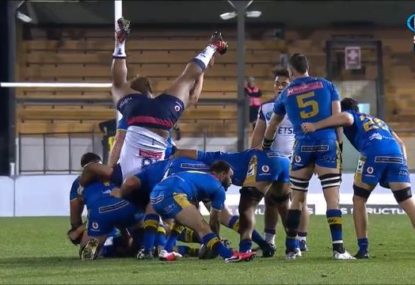 This lineout trick play from the Rebels is pure rugby wizardry

Absolute magic from the Rebels! 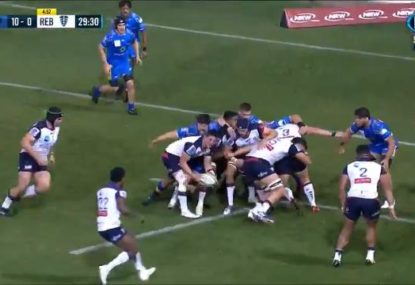 This lineout trick play from the Rebels is pure rugby wizardry

Jordan Petaia will make his latest comeback from injury off the bench for the Reds in their match against the Brumbies on Saturday night.

Once upon a time, not that long ago in fact, it was sites like this one and others that were the domain of theoretical new rugby competition formats.