Western Sydney Wanderers lined up in a 3-4-1-2, with the wingbacks covering the entire flanks and the central midfielders linking play in midfield. Mitchell Duke usually stayed up front, with Kwame Yeboah and Simon Cox taking turns in the hole to try to find space in between the lines.

Sydney FC were in their usual 4-2-2-2 shape, with Alexander Baumjohann starting on the right-hand side. He was positioned more on the flank, while Milos Ninkovic on the opposite side came more central. Rhyan Grant bombed forward to provide overlaps on the right-hand side, while Joel King didn’t venture forwards as much. 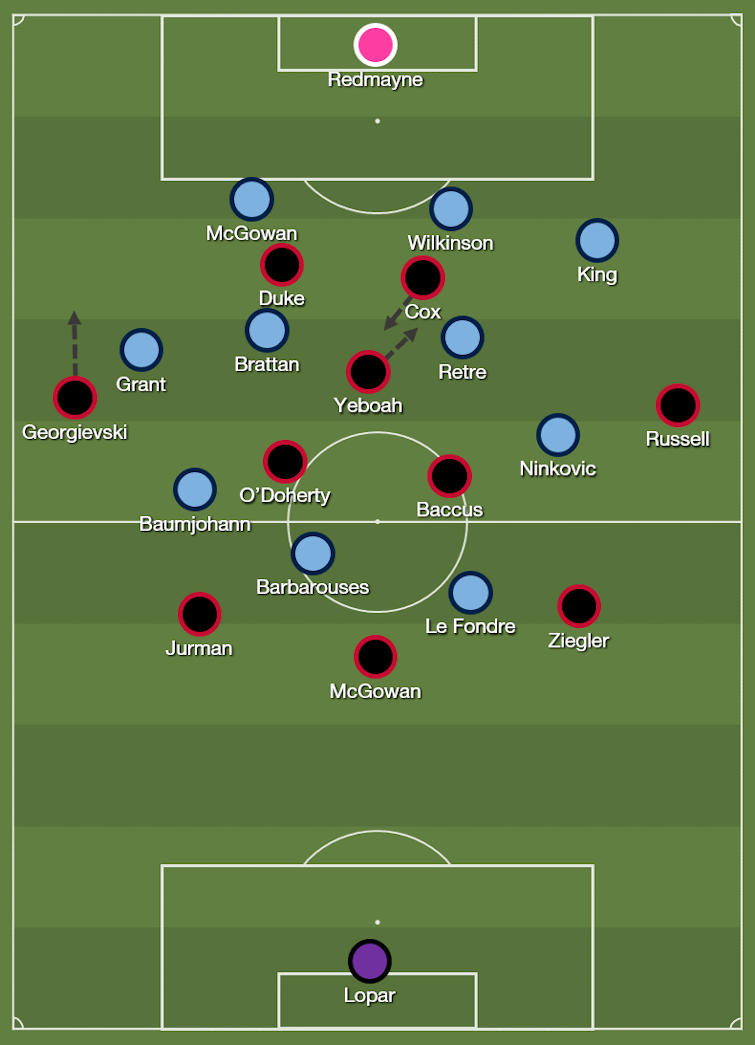 Western Sydney’s press
Wanderers pressed quite high up the pitch to not allow Sydney to build up play the way they wanted. Luke Brattan and Paulo Retre were always marked – usually by Cox and Yeboah respectively – Grant was closed down by Daniel Georgievski, and Ninkovic and Baumjohann were tracked by the two defensive midfielders.

Because the Sydney attack generally leans towards the right, the press was also biased towards that side, and Matthew Jurman would come out to mark Baumjohann when he was further forward. King was frequently left alone on the other side.

The press pinned Sydney in their third of the pitch and made it extremely difficult to get the ball to any of the four playmakers in space. For the first 20 minutes Sydney struggled to get the ball in any threatening positions unless it was on the counter.

The danger men were Baumjohann and Ninkovic, and it looked like Wanderers were instructed to deny them any time or space, so much so that for the Sydney goal, after Baumjohann had drawn out Jurman and beaten him on the turn, he drew three other players, most importantly Keanu Baccus, to the ball. King provided a free out-ball and Ninkovic, afforded a rare pocket of space, managed to pick out Kosta Barbarouses for a shot, the rebound of which was put away by Adam Le Fondre.

With Ninkovic and Baumjohann drawing the midfielders away from the centre, there was a large space in front of the defence that Le Fondre and Barbarouses were able to drop into to lay off the ball. Sydney tried a lot of through balls from these positions, but the three centrebacks were able to compress and cut off passes in behind.

Sydney’s defensive structure
Sydney started by pressing very high, but as the game settled, their structure in defence started looking like a 4-2-4 in a medium block, which would become a very narrow, compact and deep 4-4-2 as the ball came forwards. 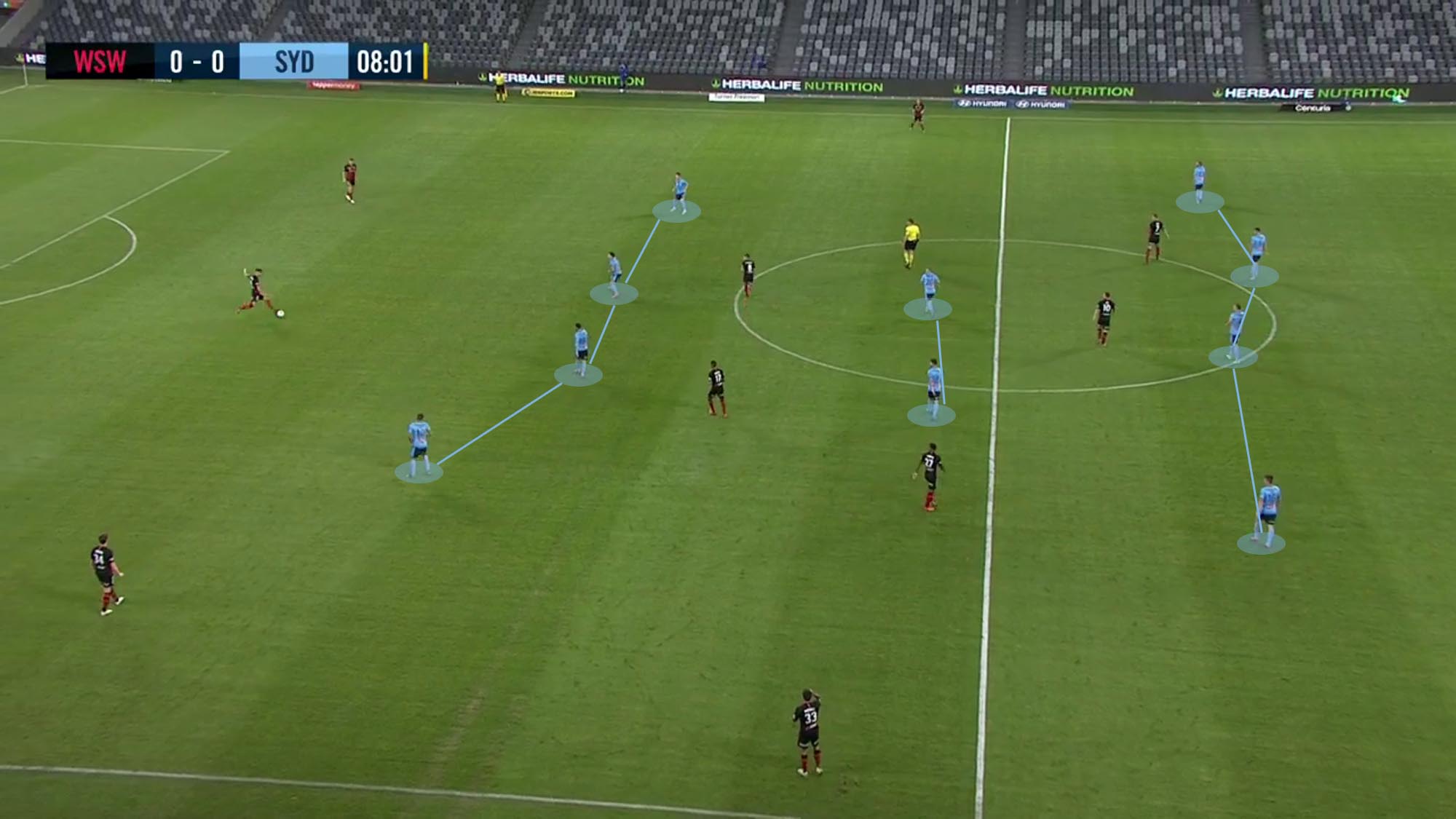 The tight banks of four made it difficult to find time and space in the centre, so in response the three attackers would take turns getting into space in the hole between the two lines and quickly help the ball get the ball switched to the opposite wingback. It was definitely part of the game plan, as they often didn’t even need to look up, and would switch the ball first time.

As a result, the ball found its way to the wingbacks very often. The attacking midfielders’ role here was key in closing them down, but after quick switches of play they were often found out of position. Georgievski in particular enjoyed lots of time on the ball, partially due to Baumjohann switching off with his defensive duties. 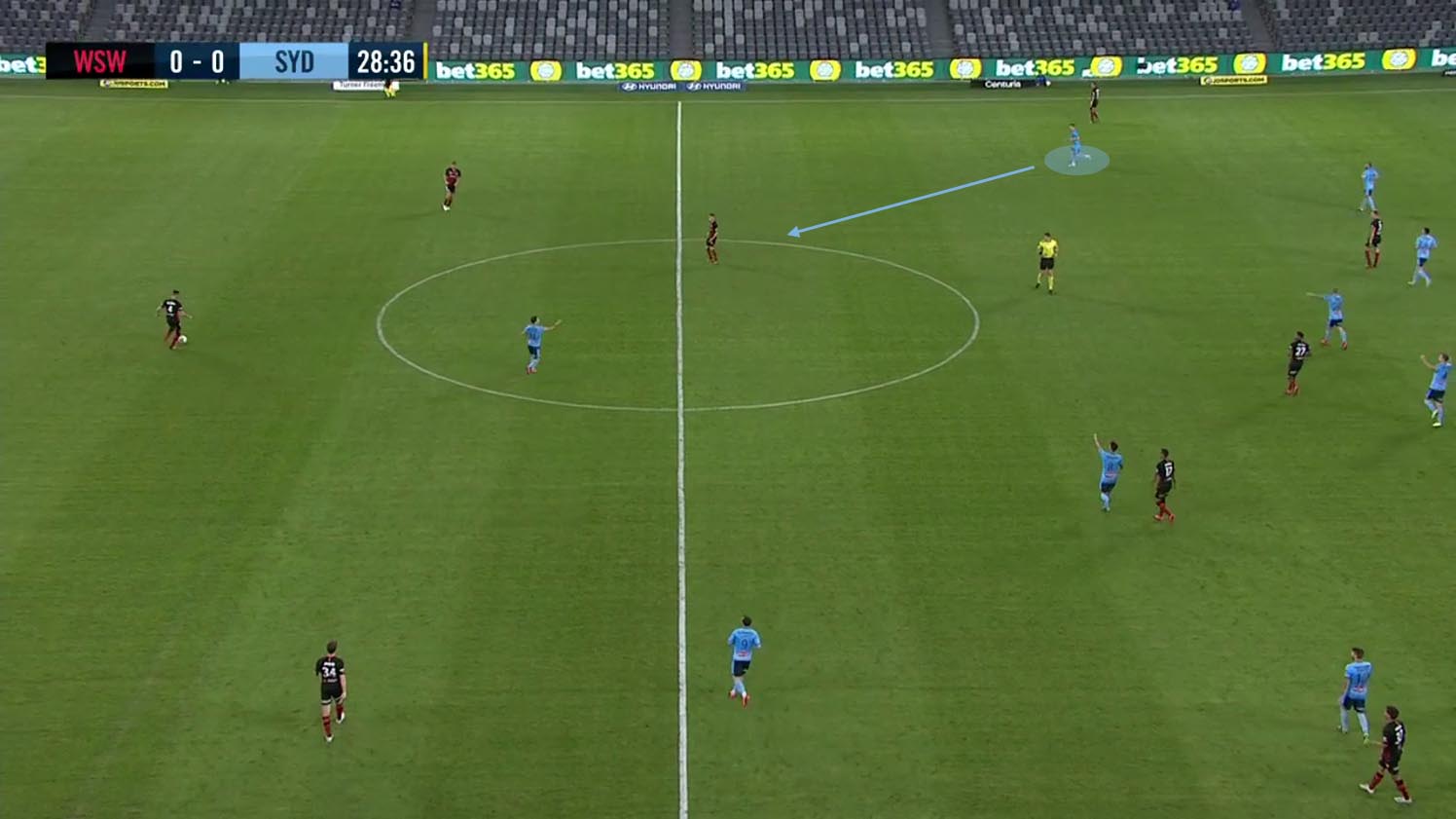 Baumjohann hasn’t tracked back, opening up a wide corridor for Georgievski. 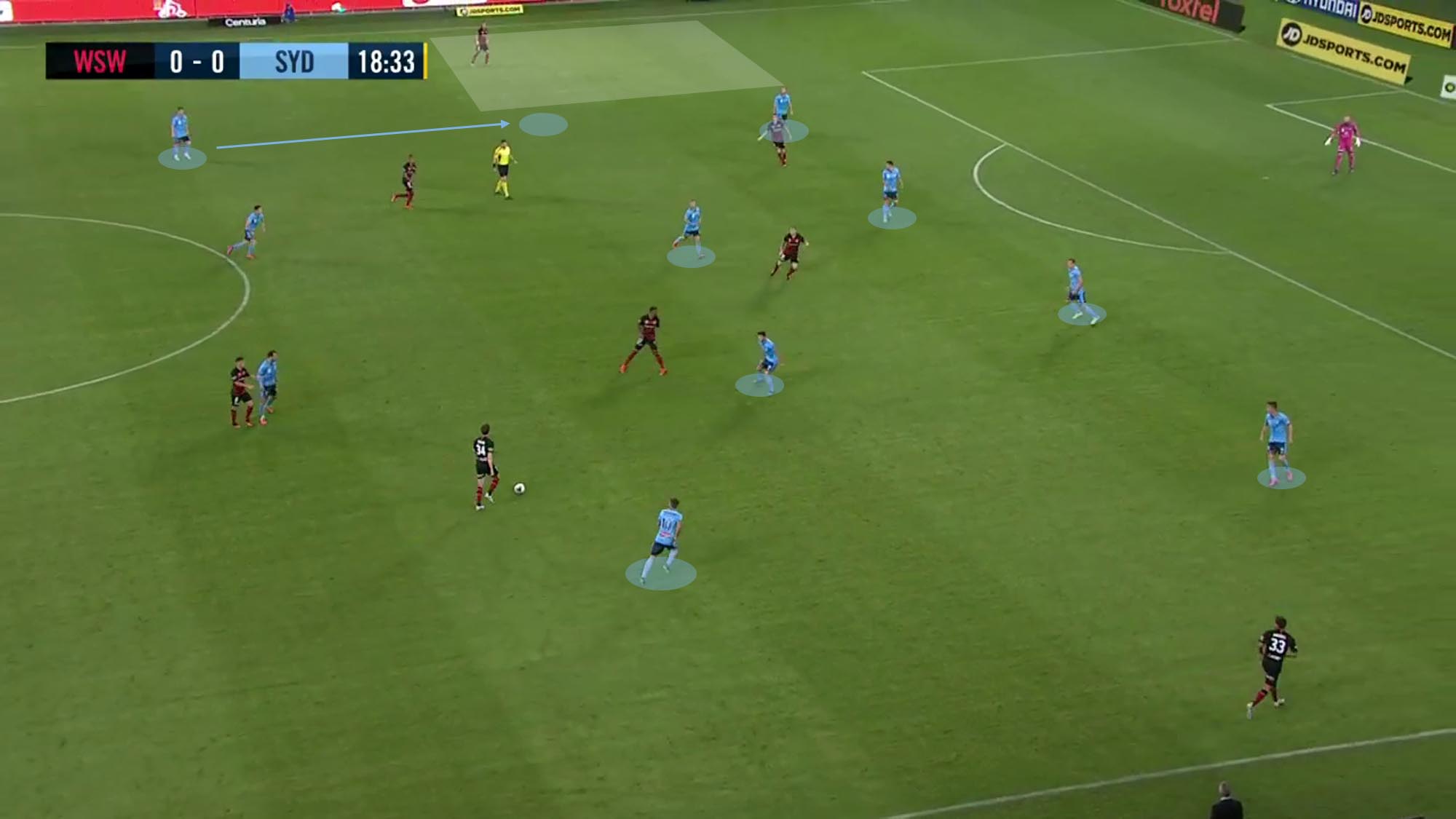 Baumjohann is poorly positioned here, prompting frustration from four of his teammates.

Second half
As the game went on, Sydney reduced their intensity of pressing and attacking. Notably, Grant went forward less as the game went on, and their attacks had limited effect. While they kept possession well, Wanderers stifled the centre of the pitch, and with a lack of real width from the fullbacks they lacked any penetration in their attacks. Their line dropped more and more and allowed Wanderers wingbacks even more time on the ball – 20 crosses came into the Sydney box in the second half.

Harry Van Der Saag came on for Sydney for two reasons: to provide some of the missing width on the right and to reduce the time and space for Georgievski, who was being allowed plenty of time on the ball by Baumjohann. Trent Buhagiar came on to provide pace in behind for the Sydney attack, but he had an ineffective appearance – Sydney passed long without much focus on direction, and when the pass was good he lacked the strength to receive the ball.

Bruce Kamau replaced Tate Russell on the right, providing a bit more pace. He had an impact immediately – he was given a fair bit of space by Ninkovic for his cross which led to the freak goal.

The game increased in intensity after the goal, with Wanderers looking more threatening, and it certainly felt that if the game had longer to go, they would have found another goal.