Leeds United won their only FA Cup to date that night, beating Arsenal 1-0, and it is my earliest ever memory of watching football on TV. I was hooked, and up until recently I had never missed the FA Cup final telecast.

The most abiding memory of that game was Leeds forward Mick Jones, arm strapped to his body and in clearly horrible pain, climbing the 39 steps of the old Wembley Stadium to receive his winner’s medal because there was no way he was missing out on making that storied climb, and then standing there in equal parts joy and distress as Leeds captain Billy Bremner held aloft the famous silver cup.

Throughout the 1970s the English FA Cup final was the only club football game from anywhere in the world to be televised live in Australia, and it is in some ways sad to see how its importance has diminished over the years. It is the game that so many kids of my vintage hung their football fandom on – that midnight kick-off on the first Saturday in May, which even as an adult I’d watch with my Sheffield-born grandmother, given she was the one who gave my addiction its first serious hit.

Televised football fixes were hard to come by in the 1970s, and they were almost all English. The Big Match hosted by Brian Moore, Star Soccer with Hugh Johns and Billy Wright and Match of the Day with Jimmy Hill were the three programs that showcased the English game. I can still hum the catchy theme songs from those shows to this day.

In the middle of the English winter they were games played on pitches that resembled ploughed mud farms. Derby County were one of the powerhouses of the 1970s era and their old home at the Baseball Ground was generally considered the worst pitch in the league, a gluepot from one end to the other – but it didn’t stop players like Archie Gemmell, Colin Todd or Kevin Hector from weaving their magic.

I say ‘almost’ all English because there were a couple of exceptions to the rule. Channel Ten showed a German football program on a Saturday morning with commentary by Toby Charles, which led to disputes in my household as it was broadcast at the same time as Hey Hey it’s Saturday on Channel Nine, and that pink ostrich transfixed my younger brother, who hadn’t been bitten by the ‘soccer bug’, as my mother called it at the time. For some reason I remember most German games being between Bayern Munich and Borussia Monchengladbach, as if they were the only two teams that existed in the league.

The other exception was the ABC broadcasting the New South Wales grand final with the urbane commentary of Martin Royal. In 1974, after Australia had returned from their first-ever participation in the World Cup finals – and with little idea of the extended heartache that was to come – the New South Wales decider between St George and Hakoah saw St George player-coach Johnny Warren score an amazing individual goal to seal an extra time 4-2 win.

My early primary school self could not have conceived at the time watching our most important football figure score his last ever goal – he famously subbed himself off straight away and retired that same day – that I would go on to play at both clubs and coach at one or that I would have a personal link with the Warren family decades later. At the time I was just devouring as much football as I could.

It was a drip-feeding of the game and I couldn’t get enough of it. Inspired by the visions on the black and white telly, I would, to my mother’s horror, don a white long-sleeve shirt, white shorts and white socks – remember, Leeds United were the first team I saw win an FA Cup – go into our backyard, where my stepfather had constructed a football goal by stringing some fishing net between two trees, and roll around in the mud to look exactly like the English players on The Big Match, before scoring goals with my own commentary soundtrack and crowd noise. The neighbours thought I was mad. 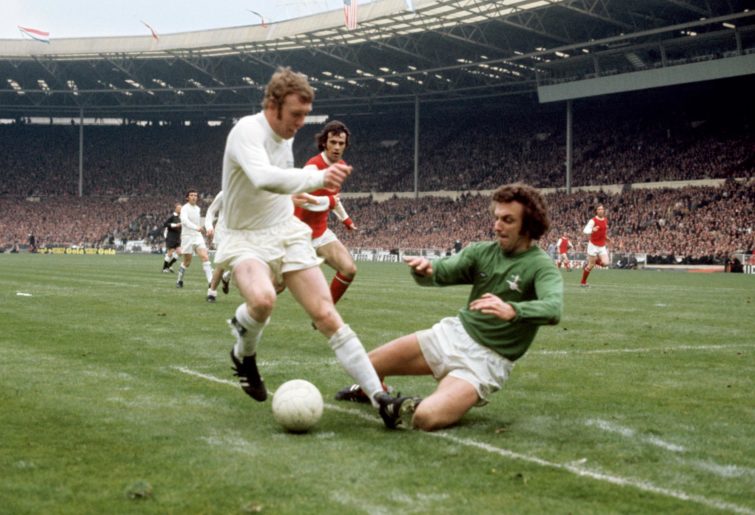 The madness can sometimes be savant-like. I hate exams with a passion because no matter what I study, I find it difficult to remember and rehash when the pressure’s on. However, I can with no hesitation recite every FA Cup final result from the 1970s, a knowledge that no university or school exam ever required. If only I’d been able to handle Shakespeare with the same photogenic memory…

In 1977 we welcomed an addition to our football fixes: the Philips Soccer League, which was broadcast by Network Ten. Australia’s first national club competition introduced me to a brave new world of football, because it didn’t much resemble the English games that were my only education up to that point. I didn’t know it at the time, but I was watching games that were influenced by a variety of different cultures as clubs like West Adelaide, Marconi, Footscray and Brisbane Lions graced the screens of our now-colour TV.

The league welcomed Newcastle KB United the following season in place of struggling Mooroolbark, although it’s fair to say Channel Ten didn’t seem as invested in the new league as they could have been. For me, however, Newcastle’s inclusion was significant, because while Network 10 buried the PSL in late-night timeslots, KB United games were televised on Saturdays at lunchtime by the NBN television network, known to northern Sydneysiders as Channel 3. This was how a Sydney lad born and bred came to be a Newcastle fan – back in those days, if you lived on a hill, the TV aerial was able to pick up Newcastle TV, and I watched all the Newcastle games, with players such as Ken Boden, Phil Dando, David Jones, Roy Drinkwater and Joe Senkalski becoming as familiar to me as those English players from The Big Match. Oh, and there was a young curly-headed guy called Craig Johnston as well…

It came to pass that the 1970s, with its limited coverage of football, turned me into a football fanatic, an irony considering the amount of football from all over the world which, until these recent unprecedented times, was available each day for our consumption. It wouldn’t be until the arrival of something we knew as Channel 0 in 1980 that the younger me would realise the vastness of the football world I’d come to be a part of. But the 1980s is a story for another day.