A large cigar juts out above the jaw, and there is a sense that the self-made rules which Cholley used to enforce so ruthlessly out on the fields of 1970s international rugby have been set aside – for now. 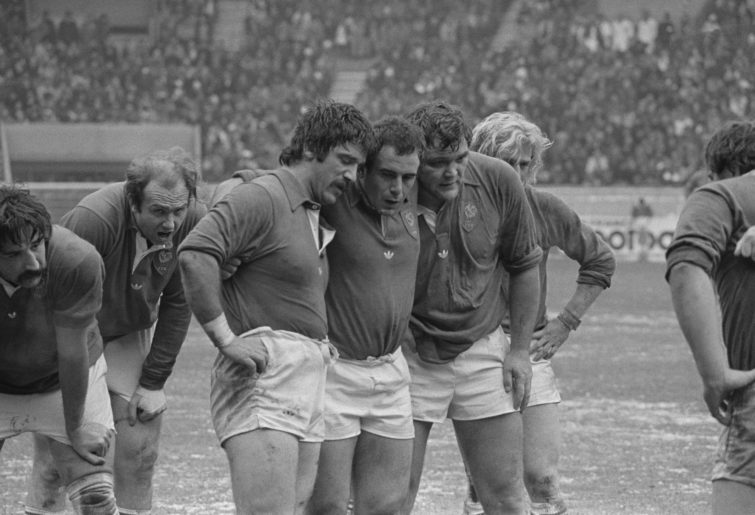 Gerard Cholley (on the right of the front row) during his playing days. (Photo by Universal/Corbis/VCG via Getty Images)

… and Cholley in rugby retirement. (Photo by Phil Walter/EMPICS via Getty Images)

Cholley is a French rugby icon, and a reminder of a time when some very big men ruled the rugby world. In his playing pomp, he was six foot four inches tall and tipped the scales at 120 kilos.

He was an ex-paratrooper and French Services heavyweight boxing champion who had reportedly been recruited by his local club Castres after a bar-room brawl in which he was the only man left standing.

The redoubtable Scotland and British and Irish Lions prop Iain Milne remembered playing against Cholley in his last game for France at the gladiatorial coliseum that was the Parc des Princes:

“Two years earlier [in 1977] he had laid out five Scotsmen in Paris, his reputation was ferocious.”

‘The Bear’ recalled feeling apprehensive at the prospect:

“I remember standing at the tunnel in Paris and looking at Cholley and the rest of them and they were like a gang of people who’d just been released from the Bastille prison. Then I looked at our lads – Ian McGeechan, Andy Irvine and Alan Lawson, with their beautiful combed hair and their white shorts and I said to myself, ‘How are we going to survive this?'”

Gérard Cholley was a totem in that brutal French team of the 1970s, and a link in the chain of over-sized front-rowers who have often bed-rocked the success of forward packs across the eras.

Think ‘Mof’ Myburgh for South Africa of the late ’60s and early ’70s, and Os du Randt two decades later, following the example of ‘Boy’ Louw – the foundation-stone of the triumphant 1937 Springboks, the only South African side to have won a Test series in New Zealand.

Think of Tom Lawton and his 120 kilos, quite literally at the heart of the resuscitation of Australian scrummaging and the renaissance of the Wallabies via Grand Slams and Bledisloe Cup wins in the 1980s.

Think of Carl Hayman, all six foot four and a half inches and 120 kilos of him, bringing All Black forward play back to life at tighthead prop, and kickstarting an unprecedented period of dominance in the professional era for New Zealand from 2004-2005 onwards.

All of these players were talismanic figures around whom a platform in the tight forwards could be built. For several years afterwards, France pursued the fleeting shadow of Cholley after his retirement, trying to remake the likes of Patrick Salas and Jean-Paul Wolff (unsuccessfully) in his image.

Now Australia have unearthed another in this rare breed of outsized front-rowers with inflated talent, in the shape of Waratahs loosehead Angus Bell. Bell is only 19 years old but already he is as big as Cholley was back in the amateur day. When he reaches full physical maturity, he will probably be playing at 6’4” and 125 kilos plus.

Bell’s development is important for Australian rugby. The current Wallaby looseheads, Scott Sio and James Slipper, will both be on the wrong side of 30 by the time of the 2023 World Cup (Sio will be 32 and Slipper 34), so there is ample room for a younger man to emerge.

And younger means bigger – much, much bigger. Quite conceivably, Gus Bell could find himself on the left side of a front row featuring other leviathans like Jordan Uelese (118 kilos at hooker) and Taniela Tupou (135 kilos at tighthead prop). Now that really would be a thought.

If Bell has an issue, it will probably not be one of his own making. It is far more likely to be linked to the failed scrum culture at the Waratahs. That culture has moved all of Paddy Ryan, Tom Robertson and Harry Johnson-Holmes from side to side in recent times without noticeably increasing their value.

It found no value in Angus Ta’avao and Michael Alaalatoa, both of whom had to move to New Zealand to boost their careers. Ta’avao and Alaalatoa represented New Zealand and Samoa respectively at the 2019 World Cup when either might have become Wallabies.

Fortunately, Bell seems to be a self-starter. His coach at the NSW Country Eagles, Ross Taylor, was full of compliments about his attitude:

“We went to New Zealand this year [February 2019] and played the Highlanders development squad and the Crusader Knights.

“It was sort of one of his first experiences around the grade squad and just the club in general. He played in the Highlanders game and then we went to Christchurch to play the Knights, we didn’t select him that team because they had a very capable pack.

“Despite not being selected in the team, he got up the next day and went for a run in the morning, on his own, around the streets. I just thought – that might be very small and insignificant to many people – that was just old school, but showed his dedication to his footy.

“He’s got massive standards for himself in the way of preparation and recovery. Not only has he got the physical attributes, he’s got the mental attributes to learn and grow, be hungry for knowledge and develop.”

Bell began the 2020 Super Rugby season behind Tom Robertson but by Round 3 he had moved past him as first choice. That first start against the Rebels was a true test for his scrummaging. He was opposed by a tidy operator in Ruan Smith, in treacherous conditions for a tall loosehead. The surface was wet and slippery underfoot, and that tends to magnify any flaws in scrum technique.

In the circumstances, the positive signs outweighed the negative. Here is the first scrum of the game:

Referee Angus Gardner penalised Bell for having his left elbow down on the floor, a typical refereeing red flag at the set-piece. However, he missed Smith’s right knee hitting the deck at the same time, as the Rebels tighthead dived for the centre of the scrum under pressure:

The truth of the matter began to emerge more clearly on two subsequent Waratah feeds later in the half. When New South Wales had the chance to control the tempo of the scrum and the moment of the feed, they were in the ascendancy:

The first scrum jolts forward on the Tahs’ left-hand side and Ruan Smith dives for the inside immediately. In the second example, Smith is fighting to stay low after the engagement and force Bell to bend at the hips: 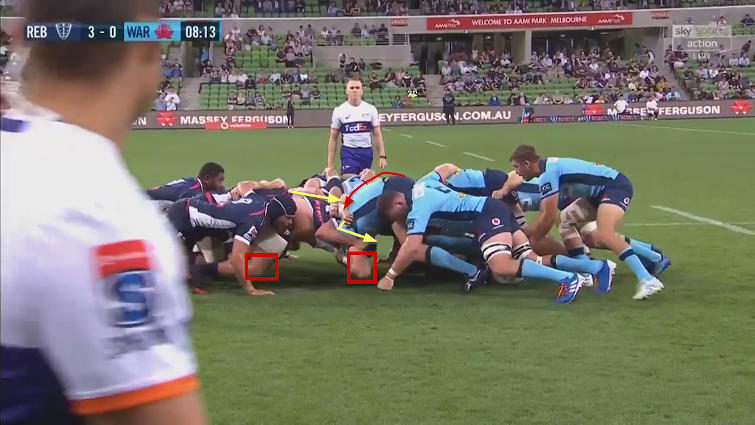 Legendary Welsh tighthead prop Graham Price once told me his basic aim was to make Cholley scrum “about two inches off the deck and hold him there – to prevent him using his enormous power… but also, to use his body as a shield from the rain of punches coming through from the French second row behind!”

Smith cannot keep Bell low for long, or stop him achieving the kind of high power-position where he is at his strongest: 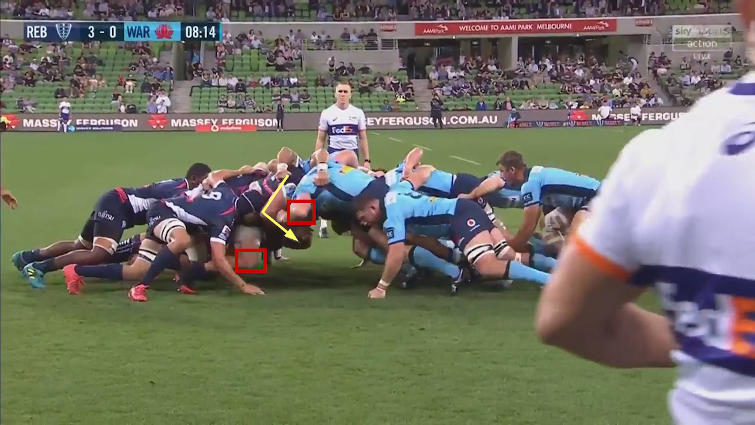 Bell has broken through Smith’s bind, and that means the Melbourne tighthead can no longer control the height of his right shoulder – a clear win for the young giant.

Bell also held on well at a series of goal-line scrums when the Rebels were looking to make a kill at the end of the first half:

Bell has the height he wants and is in the process of grinding Smith backwards when the Rebels flanker on his side (Michael Wells) breaks his bind illegally and comes up to make a ‘fourth prop’ on Bell’s hip, stabilising the situation.

It was a pity that we were denied the chance to see Bell in action against Allan Alaalatoa when the Brumbies man left the field so early in Round 7:

The young man has already learnt something from his encounter with Ruan Smith: when the tighthead packs low at ‘set’, simply pull back and let him over-extend! He will be presenting a poor picture to the official.

Gus Bell’s enormous strength can also be put to other profitable uses. I counted seven on-ball attempts at the breakdown in the four games against the Crusaders, Rebels, Lions and Brumbies, and not one of the opposition cleanouts brought Bell to ground in time:

Neither Cody Taylor nor Michael Alaalatoa can power Bell off his feet at the first cleanout, and the ball is already off the deck and in the process of being turned over when Slipper and Rob Valetini finally manage it in the second. This kind of stickability is of huge defensive value in slowing down the tempo of phase attacks.

The game against the Lions showcased Bell’s running ability with the ball in hand. He can use his size and power to make the hard carries, but the real bonus is his evident comfort in open spaces:

Bell beats a South African back-rower through the hole in both instances, but he can even use that blend of power and agility to take on outside backs. That adds true extra value:

Against the Brumbies, he flashed the ability to run and pass while ‘in pod’:

Bell’s size and speed take him through the tackle, and he has the hands to do the rest on the offload.

Summary
Monsters like Gerard Cholley are dinosaurs from an era which is extinct in everything but the memory. But their extreme size and physicality still matter today, albeit in a more sanitised form.

There may be no place for skulduggery with cameras monitoring every action on the field of play, but there is still room for the huge front-rower who becomes a rallying point for the other four tight forwards. You don’t have to use your fists or boots to prove that particular point. You can use your skills in an overpowering body instead.

Angus Bell has a shot at becoming that man. Whether he has to move away from the Waratahs in order to fulfil his potential is a pertinent question in that respect. NSW have a very moderate track record with the development of the props on their books in recent times.

With another three full seasons of professional development in front of him before the 2023 World Cup in Cholley’s home country, France, there is every opportunity for Angus Bell to join Jordan Uelese and Taniela Tupou in a front row of truly titanic proportions.

If it ever comes to pass, that would be a formidably intimidating unit. Gerard Cholley would be puffing on his cigar at the prospect and nodding his approval.