With the coronavirus bringing the entire sporting world to a standstill, like other journalists I have compiled a top 5. This time, I’m looking at my favourite Port Adelaide players of all time.

While it is a thankless task and it will divide opinion, i decided to do it anyway and put mine forward, so he we go.

5. Jay Schulz
Schulz was traded to the Power early in 2009 by Richmond in exchange for Mitchell Farmer, he played 122 games for Port kicking 272 goals.

I loved watching Jay play, his set shot kicking was virtually faultless, every time he got the ball in range I knew he was a good chance to convert.

He helped the Power in their lean years in 2010 and 2011 with his hard attack at the ball, his high-flying contested marking and great work ethic he was a great addition to a young Power side.

In Round 14 2014 he tied a Port Adelaide goalkicking record with eight in a win against the Western Bulldogs, he also won the Powers goalkicking four times in 2010, 2012, 2013 and 2014. A great all-round forward and great servant to the club, Jay comes in at 5.

4. Robbie Gray
Gray was the 55th pick in the 2006 draft and boy oh boy what a selection he turned out to be, 218 games so far along with 318 goals putting him second only behind Power great Warren Tredrea who amassed 549 in his decorated career.

Despite having a knee reconstruction early in his career he has bounced back. I regard him as one of if not Port’s most important player and have for a number of years, the things he can do on a football field are rarely matched, a smooth mover, silky with ball in hand how can you not love the type of footballer he is.

My favourite memory is Robbie kicking six goals in showdown 44, five of which came in a stunning third quarter blitz to see Port over the line. His list of achievements is impressive too, a 4x All Australian, five showdowns medals and twice has been named Port Adelaide’s leading goalkicker in 2011 and 2018.

A classy player and as smart as they come, Gray comes in at 4. 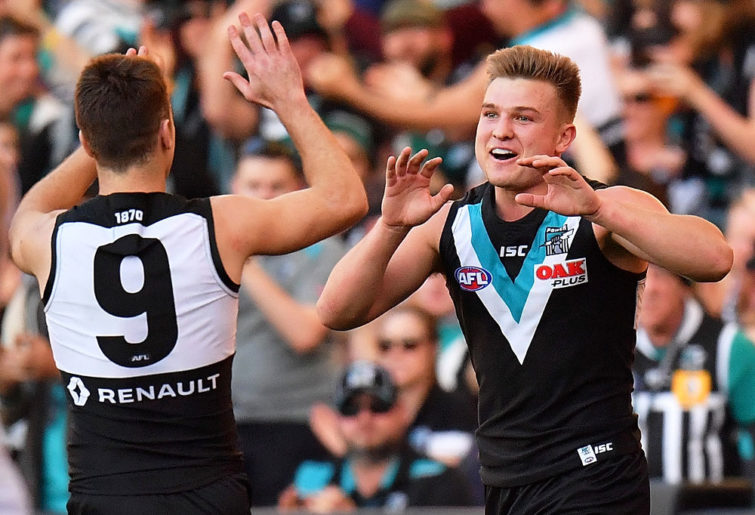 3. Chad Cornes
How could you not love Chad? Well for some people quite easily he wasn’t everyones cup of tea, his intensity and ability to play numerous positions on-field, coupled with his hatred of the Crows during showdowns, he embodied everything you could want in a Port Adelaide player.

Chad played 239 games for Port kicking 175 goals during his time at Alberton. He began as a forward and formed a formidable partnership with Warren Tredrea between 2000 and 2003 while Port we at the top of their game, before being moved to centre half back in 2004 by Mark Williams which proved to be a masterstroke.

Cornes won All Australian honours that year and also in 2007 as one of the most dominating centre half backs in the competition and in my mind during the Powers dominance in the early 2000’s he was the best key defender in the league.

A player I loved watching especially during showdowns and a power great, “The Chad” comes in at 3.

2. Warren Tredrea
I loved watching Tredrea every time he stepped onto the field. Port Adelaide’s only premiership captain he had an impressive career to say the least, 255 games along with 549 goalsv(most in Port Adelaide history) he was as a dominating key forward in the game as you will find.

A four time Port Adelaide best and fairest winner, a four time All Australian, a member of the Port Adelaide Hall of Fame and lead the club’s goalkicking eight times there isn’t much he hasn’t done in the game.

His contested marking was unmatched, combined with the ability to use both sides of his body to great effect unlike many key forwards nowadays and the chance to kick a bag every time he played, there were few better than Warren in his prime.

Although his goalkicking came under severe scrutiny at times he was the definition of a true nightmare for defenders, big Warren comes in at number 2.

1. Michael Wilson
This will be a surprise to many but Michael Wilson is my favourite Port Adelaide player of all time. Playing 192 games over 11 years, winning the rising star in 1997 he was as hard at it as anyone in the game.

A medium sized defender who occasionally played midfield he was one player i always watched closely. While not flashy or headline grabbing as some of his more recognised teammates Wilson was everything a Port Adelaide supporter wanted in a footballer, he would bleed for the cause, he never gave up, gave his all every week and left nothing out on the field.

From his dashing runs of half back, to his hard tackling and no compromising approach as a midfielder he was a “footballers footballer”.

Unfortunately his career was marred by consistent shoulder injuries, two knee reconstructions and an achilles tear in Ports 2007 prelim final win over North Melbourne which ultimately ended his career as he retired in August 2008.

Affectionately known as “Wilbur” at Alberton he tops the list as my favourite Port Adelaide player of all time.