1. Fremantle: Six wins, zero losses at 154.7 per cent
The only team to finish AFLW season undefeated, the Dockers were flying high this season and were unstoppable. If coronavirus didn’t stop the season I wonder if they could’ve gone all the way.

They ended their season in the best way possible, smashing Gold Coast by 70 points in the semi-final. An impressive bookend to a successful season.

The game against Brisbane was by far one of their best games. They were in charge from start to finish. They had momentary lapses allowing for Brisbane to score, but they just found a way to keep scoring.

Some may say the best game Fremantle played was against the Western Bulldogs and it may have been the best we have ever seen, but the way they beat Brisbane having control and never looking back shows how good they are.

It was amazing to see that they stuck to their game plan from previous years and only tweaked it a bit here and there. They found a winning formula and they 100 per cent need to stick to it going forward. They believed in each other and back one another up. They didn’t overuse the ball when going forward.

For improvement, they need to just keep working on their skills and focus on trying to avoid leaking goals. As a defensive unit, they need to be a little quicker and read the play more efficiently so they can rebound off halfback.

Could they have become 2020 premiers?

2. Carlton: Five wins, one loss at 151.8 per cent
Carlton showed why they were grand finalists in 2019. They finished as one of the in-form sides in the competition and had the wins to show for it.

We missed out on seeing Carlton take on North Melbourne in the preliminary finals due to coronavirus. But we can all imagine how good that game would have been with two amazing sides who had great 2020 seasons.

The best win Carlton had this season was in the grand final rematch. It was a very tight contest all game and they only came out eight-point winners. Finding goals in the first quarter was hard for the Blues as they conceded three early goals to the Adelaide Crows, but they fought their way back in the second and though it came within a kick in the last quarter, the Blues were able to hold on.

Their ability to adapt to different positions, roles and teams showed that they’re versatile. They were able to play to create their run-and-flow game style but could change it up when they needed to. They had to adapt to a high-marking game when they took on the Crows.

Going forward into next season they need to work on their ability to start games quicker. They were slow off the mark in every game this year. At times it cost them the game, such as when they went down to Collingwood due to a poor start.

They tend to wait for the opposition to get going, which puts them on the back burner instead of attacking and putting the pressure on from the first bounce.

Their ability to find different targets up forward improved a lot this year and if they can continue to grow as a group they can definitely take the AFLW title.

3. Melbourne: Four wins, two losses at 164.5 per cent
There was a lot for Melbourne to smile about this season. There was the first final appearance for the club and the return of beloved Melbourne player and captain Daisy Pearce.

Her return was one everyone was excited for and most expected her to return to midfield role – however, new season, new position. The skipper moved into defence and it was a brilliant decision to do so.

Her ability to read plays and knowing when to go for the ball and come off her player helps her game and her team.

Melbourne’s best win? Well, there’s no doubt every Melbourne supporter loves a good thrashing. Their performance against newbies West Coast Eagles is one they won’t forget.

Keeping West Coast to only one goal one the entire game and piling ten goals of their own on. To come away 59-point winners was something Melbourne supporters haven’t seen for years in the AFL, and they did it at home at Casey Fields.

Things that worked this season: Daisy Pearce in defence was a brilliant move allowing for the midfield to continue to grow and for the defence to get stronger. Her ability to read the game is exceptional and it showed with her experience and leadership helping the next generation of stars coming through.

Injuries are a huge downfall for any team and Melbourne continue to find themselves with a huge list. They need to find a way to improve and manage their injured players in the offseason.

They need to continue to grow and get some key players back, especially their ruck in Lauren Pearce. That will strengthen their midfield going forward.

4. Collingwood – Four wins, two losses at 153.7 per cent
Collingwood was a team that bounced back so well from last season after only managing to win one game. Before the season ended due to coronavirus, the Pies were sitting fourth and had only managed two loses. 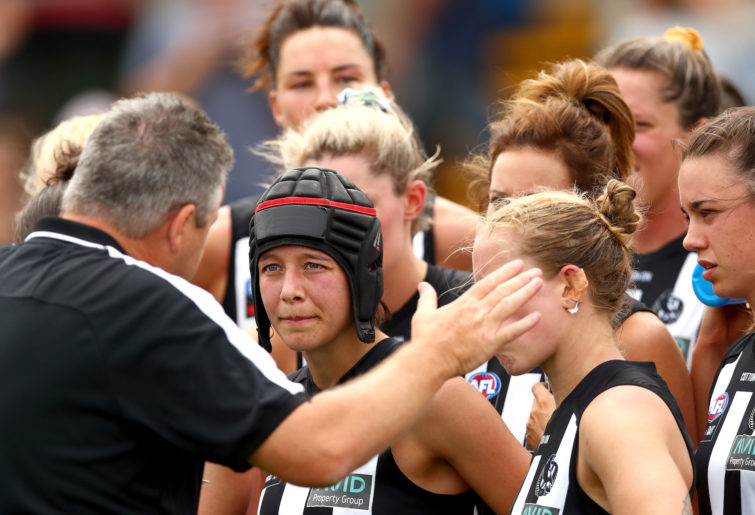 Pies fans would be very happy with improvement coming from around the ground and new coach Steve Symonds would be very pleased with his team after a year in charge. The Pies were able to rebound off halfback well and used their wingers and midfield excellently, allowing for the forwards to do what they do best when going forward.

Collingwood’s best win came against the Western Bulldogs. The Pies kept the Dogs goalless until halftime, but by then the game was over and the Pies went on to win by 32 points. The Bulldogs were no match for the Pies’ outside run and midfield brilliance. Collingwood applied the pressure everywhere and dominated in the air and on the ground.

Steve Symonds knew his side had to win and win big to keep in the hunt for the finals series, and that they did.

They ended their season with a two-point loss to North Melbourne in the semi-finals. It was a nail-biting loss that will hurt but it will create the fire in the belly for next season to get better. With a new coach, the game plan was different this season and it paid off with some great performances and wins, making Symonds’ second year in charge very exciting for Collingwood supporters.

During the pre/off-season the Pies need to find another forward target to free up Chloe Molloy who played in various positions and seemed very threatening when she was ahead of the footy. However, she was often required behind the ball.

They need to work out another outlet when going forward or find someone else who can rotate been the two positions to free up Molloy.

They were in with the hunt, but just lacked polish and targets at times.