Foxtel’s scheduled payment to FFA, honouring the broadcast deal it signed in 2016 worth $346 million, has been missed and without football on the pitch to broadcast, the media giant now eyes an opportunity.

With the league failing to provide content, Fox Sports continuing to lay off staff and now the chance for a nice and neat severing of ties with the Australian game, the A-League is about to lose its host broadcaster.

The circumstances create a window for the Murdoch-owned body to walk away from a six-year arrangement, citing breach of contract and escaping from a deal that was doing little for them in terms of ratings or commercial benefits.

The immediate reality of already financially stressed clubs, unpaid players and staff and still no likely date set down for a return to action, makes the Foxtel move a no-brainer. For them.

Sadly it could and probably will have disastrous repercussions on the Australian game with the pool of funds available likely to have shrunk considerably when we finally do see our favourite domestic players back on the short grass.

In a nutshell, FFA is about to lose around $57 million per season, much of which is used to buffer the clubs spending of the $3.2 million salary cap and supposedly to attract marquee players to the competition in order to put bums on seats.

Already there is talk of a potential legal challenge to any Foxtel walk-out. Legal minds far more clever than mine will deal with that one.

Putting on my captain obvious costume, it is safe to say that there is not a corporate entity waiting in the wings to tip in anywhere near that kind of money in either the short or medium-term future.

Thus, the clubs will be spending far less on wages, FFA will be seeking a new partner to disseminate the games to the public and thus, Australia’s elite level football competition is about to take a few steps back.

Equally as scary is the prospect of a host of major sponsors and corporate interests leaving shirts, corporate boxes and functions; choosing instead to recover from what looms as a serious economic downturn.

Their employees and investors will probably demand that be the case until the bottom line begins to appear less horrific; many may well be unable to meet the terms of their deals and football will probably be even more financially precarious than other professional codes around the country.

Perhaps the elite league will return re-branded. Many will hope it does. Those harbouring desires to see Australian football return to the halcyon days of the NSL era, where community-based clubs held sway, will be hopeful.

People like me will be keen on seizing what looms as an opportunity to make an immediate move to promotion/relegation, with top-tier clubs suddenly becoming far more financially akin to those participating in NPL1 competitions across the country.

FFA head James Johnson will be sleeping little, pondering on these and a host of other issues that will not be overcome in anything other than the long term.

The Australian football community is on board with him; an experienced and credentialled man he is. However, is there something of a silver lining that may in fact see the game emerge more stable than the current scenario suggests?

Firstly, and thanks to a mostly consistent and diligent approach to isolation, social distancing and government policy that has aided the fight against COVID-19, Australia will likely emerge and re-open well before many other countries. 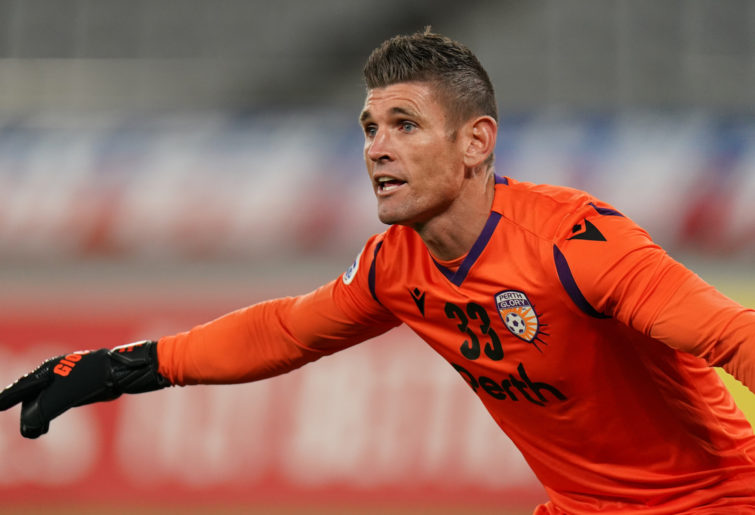 Liam Reddy has called for clarity amid the A-League’s COVID-19 suspension. (Photo by Etsuo Hara/Getty Images)

Potentially, that allows the game to begin its rebuild well before others have even begun to plan for the same. A-League players may well be forced to take considerable pay cuts, yet with many international leagues likely to be months away from play, players are unlikely to be poached.

Even when other competitions do return to play, should the financial hit they have experienced remain comparative to that of Australia, the domestic game might be able to hang on by the skin of its teeth.

Getting back to play quickly, restructuring where needed and riding a relatively strong economy that allows Australia to emerge from the pandemic as a comparative winner, could well be what sees football return successfully at the professional level, far less disastrously than many predict.

It is not joyful in any way to suggest that Australian football may well survive at the elite level thanks to the misfortune of other nations, yet as a harsh reality, it should be something FFA are looking towards in terms of getting the game back on track.

Maybe, just maybe, there is a path through this mess. James Johnson needs to be the man to find that path.