The Sharks got one over former player Valentine Holmes as they secured a thrilling 26-16 victory over North Queensland in Townsville on Saturday night.

All of the players subsequently passed a second test and after withstanding an opening barrage by the Cowboys, the Sharks powered to a deserved five tries to three win.

Centre Jesse Ramien, the player of the match, and winger Ronaldo Mulitano scored doubles for the Sharks with Briton Nikora also notching a four-pointer for the visitors.

Kyle Feldt grabbed a double of his own for the Cowboys, including a 75m breakaway effort in the second half, with Justin O’Neill the other tryscorer for the home team.

Both teams also had tries denied by the bunker, with Ramien having an effort scratched just before halftime while a potentially vital effort by Esan Masters in the second half for the Cowboys was ruled out after the officials spotted a knock-on by Shane Wright.

“It wasn’t pretty, but a win’s a win for us at this point of our season,” Sharks coach John Morris said.

“I’m just real proud of the boys that they kept their nose in front and a really good commitment in defence.

“They worked real hard for each other and took away a valuable two points for our season.”

Holmes, facing the Sharks for the first time since he walked out on the club in 2018 to pursue an ultimately unsuccessful NFL career, could only manage 101 running metres and made three errors.

He wasn’t the only Cowboy to be sloppy with the hosts making 18 errors to the Sharks’ nine and only completing 24 of 41 sets.

The hosts, who were already coming into the game without wrecking ball forward Jason Taumalolo (knee) and Coen Hess (ankle), lost two more forwards in the opening half.

Backrower Mitchell Dunn failed a head injury assessment while John Asiata didn’t feature in the second half after injuring a knee late in the first term.

“We created enough opportunities to win the game but at different times we weren’t good enough to be tough enough to defend it either,” Green said.

“I can’t fault their effort…but we didn’t play a smart enough game to get the reward for all that effort we put in.

“It’s just a frustrating loss because we were a fair way off our best there at times.”

Green will be eager for his team to bounce back when they play the Warriors at Central Coast Stadium on Friday, while the Sharks face St George Illawarra at Campbelltown Stadium next Sunday. 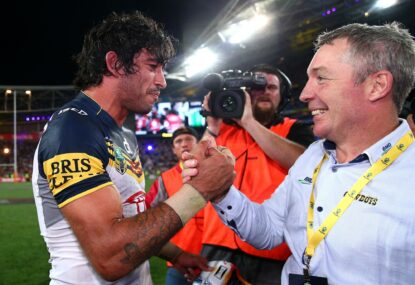 'He made us look in the mirror': How Green’s fierce desire to overcome odds steered Cowboys to glory

Paul Green was not the biggest dog in the fight, but that's not what matters. 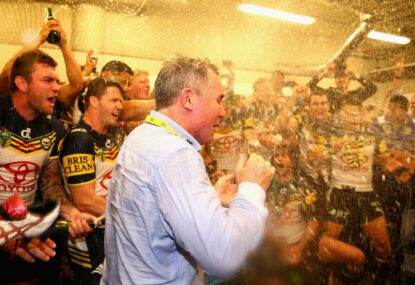 'He made us look in the mirror': How Green’s fierce desire to overcome odds steered Cowboys to glory

Just days before his shock passing, the NRL legend was given a fitting honour at Cronulla's Old Boys Day. 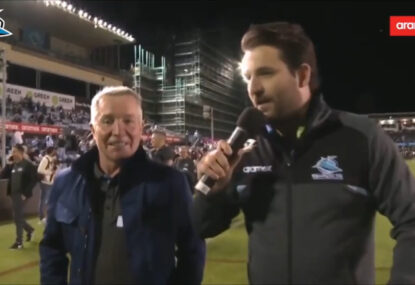