What looked like an ordinary tennis match between 23rd seed Isner and French qualifier Mahut begun play in the twilight of Tuesday, June 22, 2010 on Court 18 at the All England Club.

Isner won the first set 6-4 after breaking Mahut’s service game in the ninth game. Mahut hit back by taking the second set 6-3.

Neither player could be separated in the third and fourth sets, with Mahut taking the third set in a tiebreak before Isner levelled the match by taking the fourth, also in a tiebreak, before play was suspended due to fading light.

The two players then resumed on June 23, and as the day progressed, it eclipsed the match between Fabrice Santoro and Arnaud Clément at the 2004 French Open, which lasted six hours and 33 minutes, as being the longest match played measured by time.

As night fell, and it became inevitable there would be no winner, the match was again suspended, despite calls from the crowd of “We want more, we want more”.

The match entered its third day on June 24 (by which point, in Australia, a political spill saw Julia Gillard depose Kevin Rudd as Prime Minister), and both Isner and Mahut continued to refuse to give an inch, with both players continuing to dominate their service games.

At 30-30, 69-all, Isner struck a forehand winner that landed just inside the line to give him his first match point for the day, and fifth overall. Then he struck a down-the-line backhand winner, giving him the victory with the final set reading 70-68.

The following records fell on what were undoubtedly three extraordinary days of tennis, unlikely to ever be repeated ever again.
• Longest match by time played (11 hours, five minutes)
• Longest set (the fifth set required eight hours, 11 minutes). This set alone broke the previous record for longest match
• Longest uninterrupted play on a single day (on the second day, seven hours and four minutes of the final set was played. That alone was 31 minutes longer than the previous longest grand slam singles tennis match)
• Most games in a set (138 in the fifth set)
• Most games in a match (183)
• Most aces in a match by one player (Isner, 113)
• Total aces in a match (Mahut’s 103 aces, the second highest number by a player in a match, brought the total to 216)
• Consecutive service games held in a match (168, 84 times each for both Isner and Mahut)
• Most games won by both winning player (92) and losing player (91) in a match
• Most points won in a match (Mahut 502, Isner 478)
• Most points in a match (980)

For those who dare, you can watch the entire match here:

To put this all into perspective, this is a list of things you could do in 11 hours and five minutes (or less).
• Catch a train from Sydney to Melbourne
• Drive from Sydney to Brisbane and arrive with an hour to spare
• Watch up to five full AFL grand finals, that’s if you omit the pre- and post-match shows, as well as halftime
• Watch up to eight full NRL grand finals (again omitting the pre- and post-match shows, and halftime)
• Complete the Bathurst 1000 in record time (though doing it twice within 11 hours and five minutes would be impossible given you’d have to refuel and change tires regularly)
• Walk from ANZ Stadium in Sydney to the Penrith CBD, and arrive with over two and a half hours to spare
• Watch the entire Lord of the Rings trilogy
• Watch every single match of Serena Williams’ run to the 2009 Wimbledon title (she played for less than ten hours in that tournament)
• Watch the 2008 Wimbledon men’s final between Roger Federer and Rafael Nadal twice (omitting the rain interruptions), and be halfway through a third running

The day after the match, an exhausted John Isner crashed out of the tournament, losing in straight sets to Dutchman Thiemo de Bakker 6-0, 6-3, 6-2 in just one hour and 14 minutes – the shortest men’s match to that point of the tournament – without serving a single ace.

As fate would have it, Isner and Mahut would again face each other in the first round at Wimbledon in 2011, but there would be no marathon this time with the sequel ending in a straight-sets win to Isner – 7-6, 6-2, 7-6 – in two hours and three minutes.

It was nine hours and two minutes shorter (and six hours and eight minutes shorter than the final set alone) than the marathon 2010 match, which will forever go down as one of the more memorable and historic matches in tennis history. 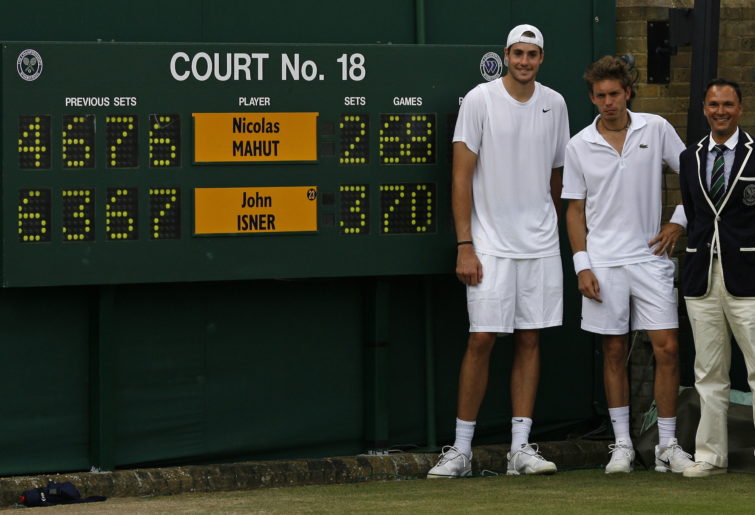 Ultimately, it was another marathon match involving John Isner in 2018 that prompted Wimbledon officials to introduce a new rule regarding the final sets of matches (fifth for men, third for women) at the tournament.

In the wake of Isner’s five-set semi-final loss to Kevin Anderson – in which the final set scoreline read 26-24 – officials introduced a new scoring rule that a standard tiebreak would be invoked at 12-all, ensuring the match gets completed within a reasonable amount of time.

So far, the only match to have gone past 12-all in the final set was last year’s men’s final between Novak Djokovic and Roger Federer, which the former won 13-12 (7-3) in the final set after saving two match points earlier in the set.

Also in 2018, the Australian Open implemented a similar rule – whereby in the final set, a first-to-ten tiebreak is invoked at six-all in the final set, again to ensure that a winner can be decided within a reasonable amount of time.

As of 2020, only the French Open allows indefinite play beyond six-all in the final set, meaning that, though unlikely, it would be the only tournament where the record for the longest tennis match measured by time and games played is likely to be broken.

But as far as Wimbledon is concerned, it is unlikely that the records John Isner and Nicolas Mahut created across three epic days in June 2010 will ever be matched, or broken, so long as the final set rule implemented in 2018 remains in place.