Douglas Adams famously wrote “We have normality. Anything you still can’t cope with is therefore your own problem”.

After the first week of Super Rugby Aotearoa many were the print journalists who claimed the game was on the brink of disaster and disruption as the referees actually set about enforcing the laws of the game as they were intended.

And, sorry to use this expression in two articles in relative short order, we had multiple instances of premature evaluation, and they were all wrong.

The penalty count over the first three weeks of the competition has fallen from 58 to 49 to 33 as the players come to terms with how they are going to be officiated going forwards and adjusted accordingly. An average of 16 penalties per game by week three, guess we would all be pretty happy with that.

Interestingly when the Blues/Crusaders and Hurricanes/Blues games in the opening rounds of Super Rugby 2020 produced 52 penalties between them, it does not appear there was a not peep out of these same writers.

I did see a wonderful article from Stuart Barnes in the UK Times as he responded to those criticising the high penalty count in week one of Aotearoa Rugby when he stated he would rather watch a Super Rugby game with 30 penalties than an English Premiership game with 10.

In short, Barnes had figured out the new directives would provide us with a cleaner, safer and faster game and was throwing his weight right behind World Rugby’s new directives.

Actually, all of the dire predictions about the future of the game under the new breakdown directives have come to nought. If we compare the six matches in Aotearoa Rugby to date with the opening six New Zealand derbies from the start of the Super Rugby season proper way back in January, there are some interesting observations to be had.

Average turnovers conceded, per team, per game from Super Rugby was 12, for Aotearoa rugby – also 12.

Average penalties conceded, per team, per game from Super Rugby was 11, for Aotearoa Rugby – 12.

Average ruck retention rate, per team, per game from Super Rugby was 95per cent, for Aotearoa Rugby – 91 per cent (and this includes a single outlier of 82per cent from the Highlanders in game 1).

Not a massive difference is it, except that its harder to protect your own ball at ruck time, although in week three of Aotearoa Rugby the ruck retention rate was 96 per cent, so not exactly a disaster for the attacking side is it?

And what do we have in return.

From a safety perspective, an immediate success
– No cheap shots from the side
– No hits on the back of the neck as jacklers looked to survive the opposition cleanout
– Not a neck roll to be seen
– No off the feet missiles to try to move defenders who are off their feet

From a playing perspective, we have quicker cleaner breakdown ball that is going to speed the game up and already we are seeing sides concede tries as they are not able to get their defensive lines back and set in time.

We have a genuine contest for the ball back in the game, the quickest to the ball at ruck time is being rewarded and the return of the counter ruck to the game should be welcomed by all, I do love a good counter ruck.

In addition, we have had two unexpected bonus’ from the new focus. First, the constant refereeing warnings to players at every ruck is largely – man that was annoying, poor old Nigel Owens won’t have anyone to talk to when he gets back to work, and second, how much cleaner is scrum time, it is almost as if the very essence of our game has been handed back to the players and the largely pointless machinations that went on almost every scrum seem to have magically disappeared (fingers firmly crossed on this one.)

As well as congratulating the referees for doing as directed we should also recognise how quickly our players have adapted to the officiating.

The body shapes of the ball carriers when going to ground and speed of placing the ball have changed markedly in two weeks, the first offensive cleaners and support for the ball runners have resulted in fewer isolated players and the blocking of the distributor/tip passer, thus slowing their arrival to the ruck, has gone. All rapid adjustments resulting in fewer penalties and a quicker, more entertaining game.

I think we can call this one a success, time to move on to the number of substitutions and the penalty advantage law when you get a moment Bill.

And with his team losing by 6 points, safe to say it proved costly! 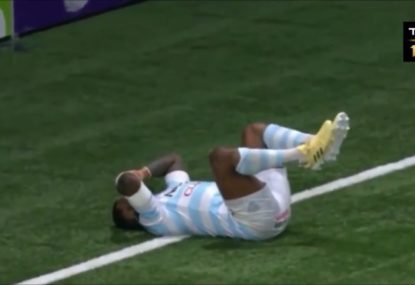