There were some tasty snippets in the Rebels vs Reds clash last Friday but a pair of moments – in terms of sheer excitement – stood above the rest.

I am referring here to the two eye-popping interventions by Rebels tighthead prop Pone Fa’amausili.

His dual feats of pulsating power had the folks in the Brookvale crowd – including myself – shifting in their seats, bellowing a spontaneous, “Ooooh!”

First was his teeth-rattling tackle in the 41st minute on Reds fullback Bryce Hegarty.

“I don’t think that Hegarty saw me,” recalls Fa’amausili.

“I was in Marika’s (Koroibete) shadow, then Hegarty stepped off his right foot and I popped up out of nowhere.

“I just saw a good opportunity to get into him and put on a shot.”

Did he ever. Hegarty was sent back in the direction he came about as quick as humanly possible.

It was reminiscent of Wycliff Palu’s massive hit on Rob Kearney in Dublin 11 years ago. Bizarrely, the Wallaby No.8 was then yellow-carded for not using an arm-wrap. But completing tackles like these is seemingly impossible when the collision is so forceful.

“I was going to wrap but it was too late,” says Fa’amausili. “Because he bounced off me, he was far from me and I couldn’t get my arms around him.”

To his credit, Hegarty was straight up and at ‘em after having his bell rung. But perhaps picking out the biggest man on the field to run into is a habit worth changing.

“I was told by a few Rebels players after the game – who have trained and played with Hegarty – that he’s run straight into big props in the past like (former All Black) Tony Woodcock,” says Fa’amausili. 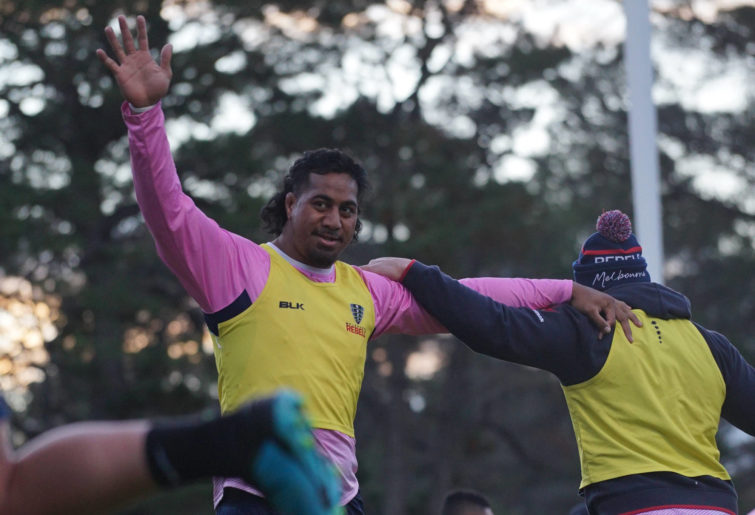 Six minutes later there was another epic collision. Queensland was forced to make a line drop-out after grounding the ball in goal. Fa’amausili was ready to rampage should the pill fly his way.

“I had Dane Haylett-Petty telling me to come behind the 50-metre mark to do a massive run up,” he says. “The kick ended up going on Dane’s side and I just ran off him.

The man in front of him was 21-Test Wallaby Lukhan Salakaia-Loto. Fa’amausili pinned his ears back and launched all of his six-foot-five, 133-kilogram frame into the gun Queensland forward.

Salakaia-Loto took down his man but not before Fa’amausili chewed off 25-odd metres. It was good, simple footy but thoroughly captivating.

If you thought Fa’amausili’s straight-and-hard burst was redolent of the 13-a-side stuff, you’d be right on the money.

“I had a rugby league background before I became a professional union player,” he says. “Those hit ups were my favourite thing to do back in league and I enjoy now being able to do it in union.

“Some people would probably say it was ruthless and not very smart. For me, it’s the contact that I love the most and I would do it any day of the week.”

If that’s what it’s called, bring on more ruthless.

It has been a long rise to top-level rugby for Melbourne born-and-raised Fa’amausili. After his dabble in league as a teenager, including training and trials with St George Illawarra and Penrith juniors, he returned to 15s when encouraged by a friend to try out for the Rebels’ U20 team.

“I went straight into tighthead prop,” he says. “It was Nic Henderson who put me in there.

“I didn’t know it was such a tough position until I played my first game against the Reds. A couple of the boys that I played against in that first U20s game were Wrongers (Liam Wright), and Blythy (Angus Blyth).

“I then made the U20s camp for Australia and I played in the Oceania Cup, but didn’t quite make it the World Cup in Georgia.

“The Rebels have looked after me from there. They’ve kept their eye on me and here I am today getting my chance.”

It’s taken plenty of graft from Fa’amausili in the intervening years. He has had to adapt to a new code, learn his position, and compete with the other props for precious moments on the pitch.

Fa’amausili’s seventh appearance for the Rebels last Friday came more than two years after his debut, against the Sunwolves in 2018. His start in Round 1 of Super Rugby AU was the big man’s first time in Melbourne’s run-on team. 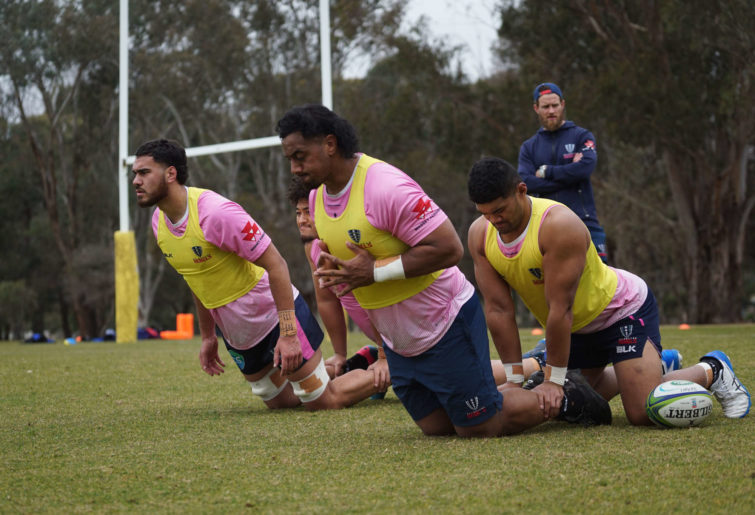 “It’s taken me a lot to get to this point,” he says. “Three years to be exact. I’ve always been the third-string prop and it’s taken a long time to learn the points of being a good tighthead.

“I’m very grateful to be able to start these two games over Jermaine Ainsley who is a Wallaby prop.”

Fa’amausili’s efforts helped the Rebels get into a competitive position in last Friday’s clash. When subbed off after 47 minutes, his side held a 6-5 advantage which they extended to 18-8 deep into the second half. Alas, they could not hold on, as the Reds scored ten points in the final five minutes to ultimately force a draw.

“It’s unfortunate that we couldn’t close out the game, but it’s just another learning curve for us,” he says.

“We haven’t come away with a win yet in our first two games, but I can say that we have been improving each day and that’s our goal – to get better at training each week.”

As for his personal aims, Fa’amausili is looking to nail down the No.3 jersey and keep building his early-season momentum.

“My main goal is to start every game for the rest of the competition,” he says. “I’ve had some tough injuries over the last couple of years. To be able to put some games together would be really good for myself.

”Also, I really want to put my name out there. I’m off contract this year and I’d like to get attention from everyone and see where I go from here.”

Getting some attention should not be too difficult. It’s only a step up from being sighted, which Fa’amausili will have no problem achieving with his floppy mullet hairstyle and broken goatee sitting atop that enormous rig.

Fox Sports commentator Rod Kafer summed up his presence well: “It’s not often Taniela Tupou looks small. He does next to Pone Fa’amausili!”

The Rebels’ tighthead offers something that last Friday’s match lacked at times – watch-ability. I for one cannot wait to see Fa’amausili clatter into some bodies again soon. I doubt I’m the only one whose attention he’s caught.