With heavy rain forecast for Perth, the blockbuster showdown could end up being a scrappy slugfest.

But even if the rain stays away, Taylor hopes Geelong’s midfield can exert enough pressure to ensure Collingwood’s forward entries lack finesse.

“Both teams are pretty contested in the way they play the game,” Taylor said.

“That’s the sort of stuff the fans love to see, and I love to see as a defender because I know the ball’s going to come in a little bit dirty, a little bit all over the place.

“If one team gets on top, then the ball’s going to come in easier and make my job a hell of a lot harder.”

Brody Mihocek is Collingwood’s in-form forward and looms as an ideal match-up for Taylor.

Mihocek booted four goals in last week’s 32-point win over Hawthorn, and Taylor knows he needs to be on guard against the Magpie.

“One thing he does so well is just compete,” Taylor said.

“He creates contests when you think he might be out of it. He works really hard both ways.

“These really good players like he is becoming, it’s a matter of being more team oriented to try to stop them.”

The Magpies have been bolstered by the return of Jordan De Goey, while Geelong have welcomed back Jack Steven.

The Cats (4-2) have won three games in a row to shoot up to second spot, while the Magpies are just half a win behind them in fifth.

Up to 30,000 fans can attend Thursday’s match in what will be the biggest AFL crowd of the year so far.

One of the biggest urban legends in Collingwood’s history is that the succession plan enabled success. 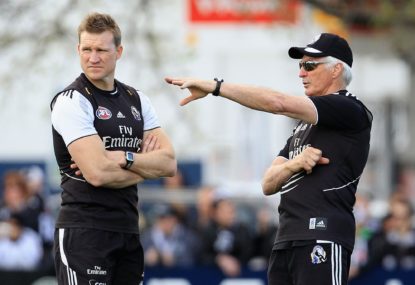 With the Nathan Buckley era now officially consigned to history, I have compiled a report card of the period between 2012 and 2021.

What a win! What a bloody win. You see these emotional performances time and time again, and I don’t care what anyone says, we are all human and emotion can cause great spikes and dips in output.