Collingwood might have found their answer to a big key forward if they can secure the pick of draft prospect Ollie Lord at this year’s draft.

Ollie Lord, who is currently 18 years old and boarding at Geelong Grammar in his final year of secondary school, is hoping for his name to be called out on draft night.

“Collingwood would be a dream come true,” he said.

“As a junior, he was always at my games on the sidelines and just giving me a few hints. He always reminds me that he’s been there and done that. He is a pretty wise man when it comes to footy and life.

“He’s taught me heaps on just how to prepare for games and what to do and what people look for. He’s been a real support to be honest.

“He’s a bit old fashioned at times, just telling me to eat some weird stuff but nah he’s been a real influence on my life and I’ve been really lucky to have him.”

Ollie’s grandpa Alistair has a twin brother, Stewart Lord, who was also a part of the 1963 Geelong premiership team and played 74 games for the Geelong Cats. Ollie has premium footy genes.

Ollie’s father Darren spent two seasons training with the likes of Gary Ablett Senior at the Geelong Cats but did not play a game.

Ollie Lord is compared to lighter framed twin players Max and Ben King and displays similar traits to Tom Lynch in the way he attacks the ball. He is certainly the type of player who would fill a void at Collingwood right now.

In recent times, Collingwood have struggled for answers from their key forwards. Mason Cox and Darcy Cameron have come in and out of the best 22 while Ben Reid has been on the outskirts all season.

Even though Cox and Reid have been affected by injuries this season, Collingwood’s second tall forward after Brody Mihocek is still a coaching dilemma for Nathan Buckley.

At his best Cox has shown he is comfortable at AFL level although enough sample size indicates that he is not consistent enough for his magnet to be left on the board untouched all season.

It is a gloomy reality for the big American but it is how things stand at this point in time.

Thankfully for Cox, he has the rest of the season to reinvigorate himself and prove to the selectors why he is worthy of a contract extension beyond 2020. He is certainly capable of proving this though Collingwood will have additional plans in mind if that isn’t to be.

Reid is nearing the end of his career at 31 years of age. He may be the unintended short-term answer for solving the key forward problem at Collingwood. He is not the long term fix they desperately need, however.

Cameron has impressed in glimpses in his first three games though he is yet to prove that he is the long term key forward for the club.

Having seen all three of them train in the mini pre-season before Round 2, I felt confident about the Collingwood tall forwards when Cox, Cameron and Reid were taking big clunks. Looking from the outside at the Holden Centre, they all looked in good shape for big seasons. It came as a surprise to see Cox struggling for form in his third season as an AFL player.

Much uncertainty remains for the big men up forward at Collingwood. It may be the 2020 draft that fixes it all.

As a draft prospect in Victoria, the likes of Ollie Lord have been challenged this year with hardly any games being played due to the COVID-19 pandemic.

One change that Lord made in tackling the unique situation was a move to the Geelong Falcons from Sandringham Dragons where the chances of games and more training were higher with lockdowns only in place in metropolitan Melbourne.

Attending school in Geelong, he joined his school teammates in Tanner Bruhn, Gennaro Bove, Blake Reid, Noah Gadsby, Alistair O’Donnell, Finn Murphy and cousin Mac Lord, who are all in the squad at the Geelong Falcons.

It has been a difficult year for draft prospects in Victoria to try and put themselves in front of recruiters though past training camps and footage from last season will hold Lord in good stead. 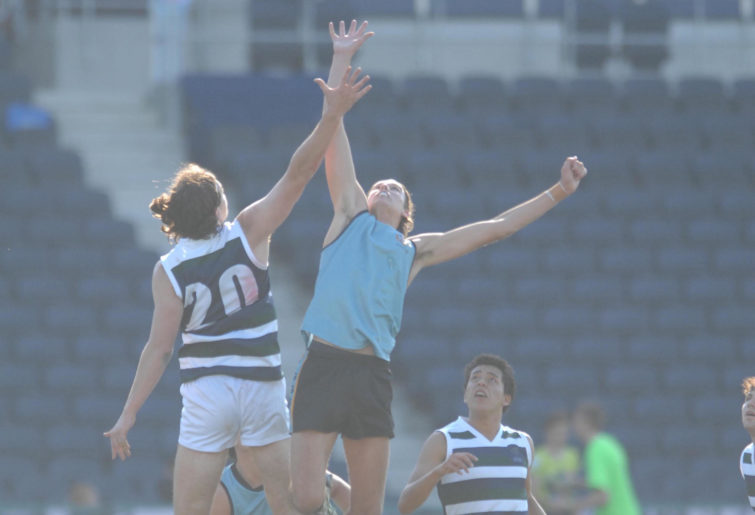 He was selected in the under-17 all stars futures clash, which featured two teams of talented prospects going on a three-day camp to prepare for a curtain-raiser match to the AFL grand final.

“Running out on the G on the biggest day of footy is an experience I’ll never forget,” Lord said.

He was joined by schoolmates Tanner Bruhn and Nick Stevens, who he enjoyed having the camp with.

Another opportunity Lord relished was spending five days training with the Melbourne Demons in December last year. He was able to join in on all activities besides match simulation. He mentioned how the experience was a “real eye-opener” into life as an AFL player.

“Running around with big Maxy Gawn and learning off Sammy Weideman in the forward line was an unreal experience for five days.”

“Marking craft, where to put your body, pushing off your man and little things like that” were skills Lord was grateful to learn from Weideman first hand.

Lord kicked 16 goals for Geelong Grammar in the ten-game schoolboy season last year. He impressed selectors with his ability to mark the ball and get ground balls and play as a smaller type of player. His athleticism and composure with ball in hand as a tall were other glowing attributes he displayed.

Lord is a player that will appeal to many AFL clubs come draft time and certainly one that could potentially solve the key forward problem that Collingwood have been facing since the departure of Travis Cloke in 2016.

Collingwood coach Nathan Buckley has defended the “fist bump” with a supporter that could have landed him in more hot water with the AFL for another protocol breach.

What an absolute shock that there will be no sanction on Sydney’s Sam Wicks for wearing metal-studded boots and seriously injuring Collingwood young gun Isaac Quaynor.