Even Wallabies coach Dave Rennie is looking forward to the next chapter of Sonny Bill Williams’ sporting career.

Williams is currently in mandatory quarantine in Sydney ahead of a cameo stint with the Sydney Roosters for the remainder of the 2020 NRL season.

The dual international has returned to Australia after Toronto pulled out of the English Super League competition.

The 34-year-old is tipped to make his first appearance for the Roosters since the 2014 preliminary final in a round-17 grand final rematch against Canberra.

It will be the latest extraordinary step in a career which has included NRL premierships, rugby league Tests, two rugby union World Cup wins and a handful of professional boxing bouts.

“He’s a terrific man,” Rennie said on Friday. “I can’t speak highly enough of him.”

The pair worked together at New Zealand Super Rugby outfit the Chiefs in 2012, with Rennie coaching a Williams-inspired team to the franchise’s first title that year.

They combined again when Williams returned to the Chiefs in 2015.

Rennie said as well as his sporting ability, the Roosters would also benefit from Williams’ leadership and guidance as they sought an historic first NRL title hat-trick.

“Massive influence and great for the young guys and so on,” Rennie said.”It’s always sad that people find a way of pulling him down but I’ve got nothing but high praise.”

For ten glorious minutes on Friday night I got to experience the joy of supporting the Roosters. 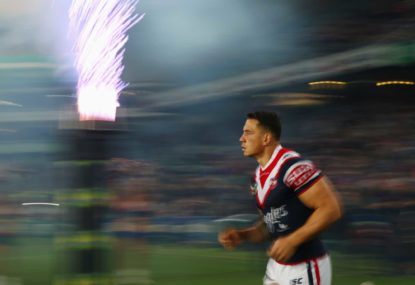