Essendon puts the red sash on a white flag

Things are bleak at Essendon.

The 33-point margin against St Kilda didn’t tell the story. Neither did the statistics. After a trying first half in which they were outclassed and outworked, they resorted to keepings off in the third quarter in order to stem the bleeding.

On multiple occasions Essendon spent considerable time chipping the ball around the back half while the Saints restricted the size of the ground. They took 29 marks in the third quarter alone after taking 24 in the first half.

It was safe, it was scared and it was demoralising.

It didn’t work against the Giants when they spent the best part of the entire second half trying to ice the game after opening up a 28-point lead. You could argue that there was merit in slowing the game down, but not for that long, as the final result showed.

The strangest aspect about the switch to slow play on Sunday was that they were able to wrestle back some momentum straight after the main interval. Goals to Adam Saad and Jacob Townsend, plus Josh Begley’s major late in the second quarter, saw the margin cut from 41 points to 23.

They were right back in the game but then played themselves out of it just as quickly, as though they were spooked by the possibility of getting scored against on the counterattack.

After all, losing is fine as long as you’re not thrashed, right? 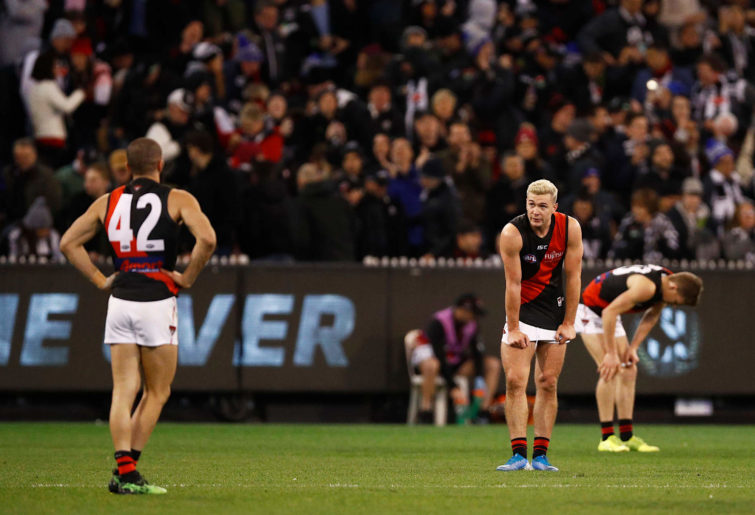 Heaven forbid the CEO might voice his frustrations on social media again if the margin blew out too far. That wouldn’t be very nice.

Narrow wins over strugglers Fremantle (six points), Sydney (six points), Adelaide (three points) and North Melbourne (14 points) means that their percentage (90 before this weeks loss) was woeful to begin with. Remaining fixtures against Richmond, Geelong, Port Adelaide, West Coast, Melbourne and Hawthorn realistically present only one or two chances to grab a win. Sunday’s game was a must-win, and yet they delivered that.

What was surrendering going to achieve for a side battling to qualify for finals? And what does it say about the attitudes of those in command, that they would rather try not to lose by too much than to go for a win?

The personnel issues in the forward line were never more evident than in yesterday’s game. Shaun McKernan and Jacob Townsend combined for one disposal to half-time. James Stewart did not fare much better.

They allowed St Kilda to take 12 intercept marks in their back half to half-time, while Essendon could manage only one mark inside 50 for the first half. They were simply uncompetitive, a predictable Essendon side that continued the incredibly unsuccessful ploy of kicking long to contests in which St Kilda had a clear numbers advantage. St Kilda’s 37 rebound 50s across the afternoon is an increase of seven on their season average.

Few players in Essendon’s midfield have the courage and conviction to bite off the difficult kick going inside 50. Outside of Zach Merrett (sixth in the comp for total inside 50s this season), his colleagues in Dylan Shiel, Andy McGrath and Darcy Parish are predominantly handballers.

Take McGrath. All eight of his first-quarter possessions were handballs. He finished the game with 16 of his 23 total touches being handballs for a kick-handball ratio of nearly 1:2. Shiel (15 of 29) was not much better, while Parish was comfortably the worst, with 18 of his 29 disposals coming by hand.

When your prime movers are hesitant to bite off the risky kick going forward, responsibility then falls to those you would prefer to not be in such positions. Sam Draper had four inside 50s but uses the ball at 57 per cent efficiency.

Obviously this is not a blanket metric. If a handball is the best option at the time, then by all means take it. But this team is so risk-averse. They went from run-and-gun out of the backline in previous years to the Richmond forward handball game, which has now disappeared after the early rounds of the season.

Remember in 2017 when Richmond had moved on Ty Vickery, lost Ben Griffiths to injury early in year and played Jack Riewoldt largely one out with a host of small and medium-sized types around him? They didn’t give up and play defensively. They went all-in with the undersized players and won a premiership, ending a 37-year drought.

Essendon’s forward line structure this year is not too dissimilar, with McKernan playing as the primary target with Townsend (former Tiger), Anthony McDonald-Tipungwuti and Will Snelling at ground level sprinkled with hints of Devon Smith, Jayden Laverde, Ned Cahill and, for whatever reason, Conor McKenna, an elite rebounding defender who looks all at sea in the forward 50.

Hardly households names, but neither were Dan Butler, Jason Castagna or Daniel Rioli at the beginning of 2017.

I’m not saying that this group should be challenging for a premiership. But I doubt Richmond fans thought that they would be three years ago either.

It’s the lack of trying that hurts.