But for Ault-Connell, this is not her first Olympic games. The para-athlete will don the green and gold 17 years after she last represented Australia in five events at the 2004 Athens Paralympic Games.

After winning bronze medals in the 2006 Commonwealth Games and World Para-Athletics Champions, Ault-Connell decided to take some time away from elite sport to begin a family with her husband, Kieran Ault-Connell.

The couple has since had three children, and Ault-Connell’s son and two daughters have certainly played a part in her returning to elite sport.

Ault-Connell remembers the moment her daughter turned to her and said: “Mum, you used to be so cool when you did wheelchair racing.”

What parent does not want to be cool in the eyes of their children?

After pulling out her old race chair from the garage and apparently, barely squeezing into it, Ault-Connell could hear her children cheering her on and yelling that mum was going to Tokyo.

And that’s when it started again.

Since returning to the sport, Ault-Connell has been extremely successful. At the Commonwealth Games in 2018, Ault-Connell won silver in the marathon T54 and in 2019, she won the bronze medal at the World Para-Athletics Championships in Dubai. 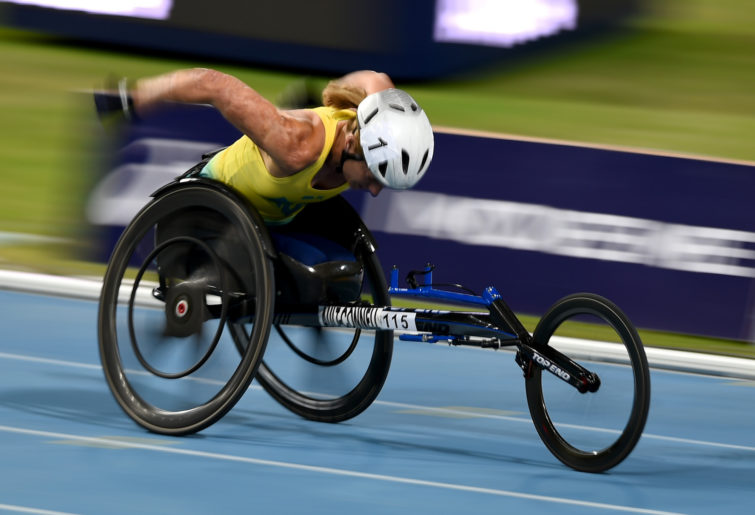 For Ault-Connell, who has arguably been more successful since returning to the sport, this is an opportunity to teach her children about being brave enough to take a chance.

“If there is something that is so big and so scary that you think you can’t do it, that if you really commit to it, almost anything is possible,” said Ault-Connell.

“Quite often, women write themselves off after 30 and after they have had kids. They are happy with what they have and they don’t go searching for more. We can all be so much more if we set our minds to it.

“You are always a mum, first and foremost. But I want women to know that there is so much more that life has to offer. If there is something else you want to do, then just do it. Life is too short.”

Life is short is a cliche, but for Ault-Connell it is something that she always keeps at the back of her mind.

“I’m turning 39 this week. You have this opportunity, you have this gift. Why not make the most of it?” said Ault-Connell.

“As much as we think we will lead long, wondrous, healthy lives you don’t know what tomorrow will bring. You have to get out there each and every day and make the most of it. Don’t wait for tomorrow. Start that dream today.

“What kind of legacy do you want to leave? What do you want to be remembered for? Hopefully I can say that I have been able to contribute in many different ways and will continue to do so.”

For Ault-Connell, all things going according to plan, there is some certainty about what tomorrow will bring. And that’s more training.

There are many Olympians and Paralympians who have had their lives turned upside down because of the pandemic. Given how many men and women had been training with the hope of competing in 2020, the postponement has meant that many of our athletes have had to readjust their timelines.

But Ault-Connell is relishing the extra time.

“For me personally, this extra bonus year is something that I want to be able to take advantage of as much as possible. I have only been back in the sport a short time, so what that year represents to me is huge,” said Ault-Connell.

“There isn’t an opportunity to compete either, so what that means is good, solid, consistent training blocks.

Hopefully, COVID will also play ball and give Ault-Connell the chance to compete in Tokyo. Her children are counting on her for that.

“I filmed them reading out the message that I had been selected for Tokyo and my eldest daughter turned to me and said: ‘Is this actually true?’ The enormity of it all had dawned on her,” said Ault-Connell.

“My middle daughter then told me how excited she was to use the electric toilets. She has done the research and knows that the toilets do awesome things in Japan.

“My son is excited about the bullet trains, so they each have their own thing about what going to Japan means to them.”

Apart from bullet trains and electric toilets, Ault-Connell is also excited about experiencing another Paralympic Games given how far the movement has come in the last decade.

“I’ve been around the Paralympic movement since the 1990s. By the time Beijing and London came along, I was holding my babies. I watched the games on television and the fact you could even do that was a massive deal,” said Ault-Connell.

“People say that Paralympians are super human. But what these lives are, in a lot of cases, are just normal, happy lives with people doing what they love and being content in their own lives. That is so powerful.”