The likes of Birkan Kirdar, Sebastian Pasquali, Callan Elliot, Lachlan Brook and any more have shown quality since the break, and there will likely be only more opportunities for younger players next season due to the rumoured decrease to the salary cap.

Sydney FC, while champions, have been the main team to have struggled to find spots for youth team players. Joel King has been a mainstay at left back at just 19 years old, but he got a consistent run of games only at the expense of the unlucky Michael Zullo, who was injured throughout the season.

However, they have been given a lack of minutes throughout the season.

This table shows the number of minutes given to Sydney under-23 players, excluding Joel King. To put it into perspective, while their minutes combined is 1070, Milos Ninkovic played 1905 minutes this season, almost twice as much on his own.

Sydney has been relying on more experienced players to lead them to success over the past few seasons, but this may not be sustainable over the next season or two due to a decrease in the salary cap because of COVID-19.

Except for Adam le Fondre, every player in Sydney FC’s squad is on a contract until the end of the 2020-21 season. Le Fondre has been rumoured to leave Sydney for around a month. In early August the clinical striker had interest from England and in particular Sunderland in League One.

According to India’s The Bridge, Sydney has the option to extend Le Fondre’s contract but due to the financial impact of COVID-19 and the lowered Fox Sports contract can’t offer him contractual clarity.

He has now reportedly agreed to terms with Indian Super League side Mumbai City.

Le Fondre would be a major loss for Sydney FC, having scored 45 goals in 67 games in all competitions for the Sky Blues. However, his leaving would open up chances for young attackers to impress.

In recent seasons we have seen players leave Sydney due to a lack of game time and impress elsewhere.

Cameron Devlin is an example. The diminutive defensive midfielder was given just 43 minutes last season to prove his quality to Sydney FC. This season he has played 1429 minutes at Wellington Phoenix, more than all of Sydney’s under-21 players combined (excluding Joel King), and is currently in contention for the A-League’s young footballer of the year award.

A move back to Sydney would likely keep him in contention for a starting position, battling it out with Paulo Retre in the No. 8 position in Sydney’s midfield. But Sydney FC needs to use Adam Le Fondre’s possible departure as a chance to give youth a go.

Trent Buhagair is less of a direct replacement to Le Fondre – he prefers getting in behind as much as possible and not really being involved in build-up play. He’s someone you bring on in the last 20 minutes of the game, usually to replace Kosta Barbarouses and stretch the defensive line.

However, Barbarouses has shown a good ability to get involved in general play and often drops off the forward line to play one-touch passes back into midfield in an attempt to confuse the opposition’s backline, so while a partnership with Buhagair is unlikely, it shouldn’t be ruled out.

Luke Ivanovic is probably the closest thing to Le Fondre Sydney FC currently have. Ivanovic presses well, never gives up and often makes opportunities out of nothing for his side. While he doesn’t have the same leadership and experience as Le Fondre, at just 20 years old he has been bright in the limited minutes he has been given. He has also shown the potential to gain a clinical edge, scoring a hat-trick in a preseason friendly.

While Le Fondre brings intelligence in build-up play, pressing and leadership, his goals would be a major loss for Sydney. Ivanovic has the potential to score at least ten goals in the A-League when given the right opportunity, but there is another striker within Sydney’s ranks that has shown a sublime clinical edge.

Patrick Wood has lit up the New South Wales NPL for Sydney FC’s under-20s side. At just 17 years old, the striker is leading the golden boot race in NPL One with eight goals in seven games. He is a tall and pacey striker who has operated on the right of a front two this season.

While he is not yet ready for the A-League, at 17 years old, if he can continue to perform on an NPL level, he may be in contention for some minutes next season for Sydney FC.

Sydney FC has been the most successful club in Australian football in the last three years. However, they have struggled to give youth a real go. Since first writing this article, Marco Tilio has announced his departure from Sydney and is rumoured to have signed a deal with Melbourne City.

It’s another big loss of talent for the Sky Blues, but with Adam Le Fondre leaving, Steve Corica should turn towards the younger strikers within the team and give them the chance to step up.

When your name is Elvis, you’ve got to be a showman! 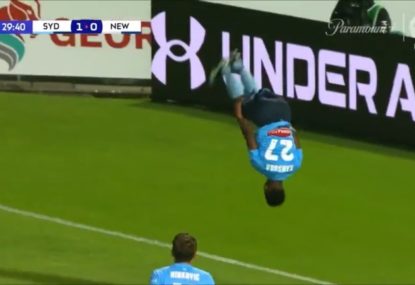 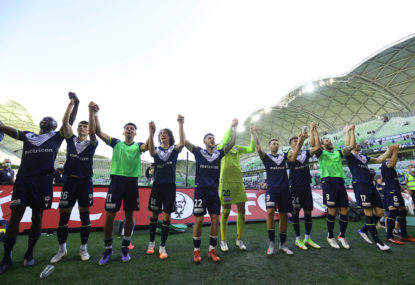