Sydney Roosters legend Mitch Aubusson is now the most-capped player in the club’s history but the celebrations were more than unusual in 2020.

The 2020 NRL season has been difficult for most but perhaps none more so than Aubusson.

After his father Brian died suddenly at the age of 60 in May, Aubusson has dealt with grief in a whole new way inside the NRL bubble, away from his family.

Since then, the 32-year-old has announced his retirement at the end of the season and racked up not just his 300th NRL game but also the honour of being the most-capped player in Roosters history.

In what has already been a difficult year for Aubusson, the NRL’s biosecurity restrictions prevented him from celebrating Saturday’s 303rd game achievement in a manner befitting the occasion.

“It was a really nice night,” coach Trent Robinson said of Aubusson, who captained the side and scored two tries in his milestone match.

“It’s been really tough with Brian passing just as we got back after COVID (break) and then the unexpected passing, and then back into footy, and then the restrictions around seeing your loved ones at the moment.

“We’re fortunate to be back playing but it’s also been very tough on a lot of people.

“He can’t hug his kids that he’ll go home and see tonight on the side of the field.

“He can’t go and cuddle his mum who has turned up for almost 300 of those games and his brothers. It takes it’s toll.

“The world goes around because of the love and connection between people and we’ve been starved of it other than hugging 50 men in the wrestle gym, that’s what it’s been about for almost five months.

“It’s been a tough year for Aubo.”

With one game left in the regular season, the versatile Aubusson has a minimum of three NRL games left in his career.

And Robinson wants to make sure he’s in the 17 for as long as possible – especially as the Roosters begin to recover from an early injury toll.

Skipper Boyd Cordner is set to play South Sydney on Friday night but the coach has flagged a rest for some other players leading into the finals.

“Possibly,” he said when asked if he would rest more players against the Rabbitohs.

“I’ll be looking forward to game and expecting whatever 17 I name to go out and do better again next week than they did this week.”

Sonny Bill Williams remains undecided about what his future holds beyond Friday night after the Sydney Roosters were knocked out of the finals by Canberra.

The dream of back-to-back-to-back premierships is over for the Sydney Roosters after they were defeated 22-18 by the Canberra Raiders in their NRL semi-final on Friday night. 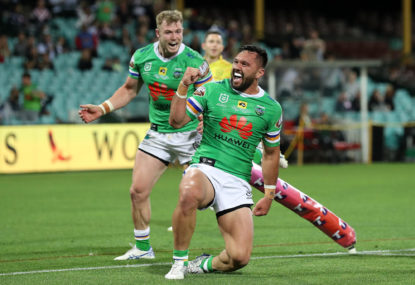 Sydney Roosters vs Canberra Raiders live stream: How to watch NRL semi-final online and on TV

The Sydney Roosters will face off against the Canberra Raiders in the NRL’s second week of finals football at the SCG. Whether you are supporting from home on the couch or overseas, live streaming on a device or watching the game on the TV, here’s everything you need to know to watch the action. 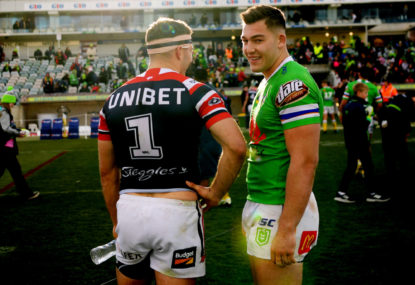 Sydney Roosters vs Canberra Raiders live stream: How to watch NRL semi-final online and on TV