It’s why anyone who’s had so much as a passing conversation with Craig Bellamy is granted at least one head coaching opportunity, and why clubs are lined up 15 deep to sign the untried and untested Craig Fitzgibbon.

So it’s a little surprising to see the make-up of the finals sides in 2020. Each has taken a different path to qualify for finals football and below is a closer examination of how this year’s top four was constructed:

When they run out this weekend, up to 14 of their 17-man squad will have made their debut for the Panthers, which is an incredible ratio.

Ivan Cleary has done an outstanding job piloting his young side through a turbulent season. To make it through 20 rounds of NRL football — including a pandemic pause — with only a single defeat is a testament to Cleary’s coaching chops.

But the man largely responsible for creating this enviable roster is Phil Gould, who arrived at the club to find it on the brink of financial ruin. Within a few short years, Gus not only tidied up the balance sheet but managed to secure funding to establish a world-class centre of excellence and a forge a formidable junior pathway program.

Penrith now appear to be the model of stability, but it hasn’t always been smooth sailing. Gould’s ability to build an NRL program is second to none, but his interpersonal skills would make Ellen DeGeneres blush. Coaches came and went with the regularity of a bowel movement, and Gus himself was punted before his dream finally became a reality.

The results, though, speak for themselves. Out of that academy came the likes of Nathan Cleary, Liam Martin, Jarome Luai and James Fisher-Harris – all current or future representative players. And there’s plenty more where they came from.

Some will point to Penrith’s lack of frequent flyer miles and a lucky run with injury as the secret of their success in 2020, but the fact remains that the mountain men now boast the talent and depth to remain a major force in the NRL for years to come. This is how you build a football side.

Melbourne Storm: Coaching and culture model
Up until a few years ago, the Melbourne model seemed relatively straightforward – spend the bulk of your salary cap on a core group of superstar players and fill out the rest of the roster with journeymen and Bryan Norrie.

That narrative changed when Melbourne made the grand final in 2018, the year after a lovesick Cooper Cronk defected to the Sydney Roosters. It was further compounded a year later when the Storm were awarded the minor premiership without Billy Slater at fullback.

So what exactly is the Melbourne model? Simple — exceptional coaching, unrelenting standards and a strong team culture. In short, the Storm are successful because of Craig Bellamy. 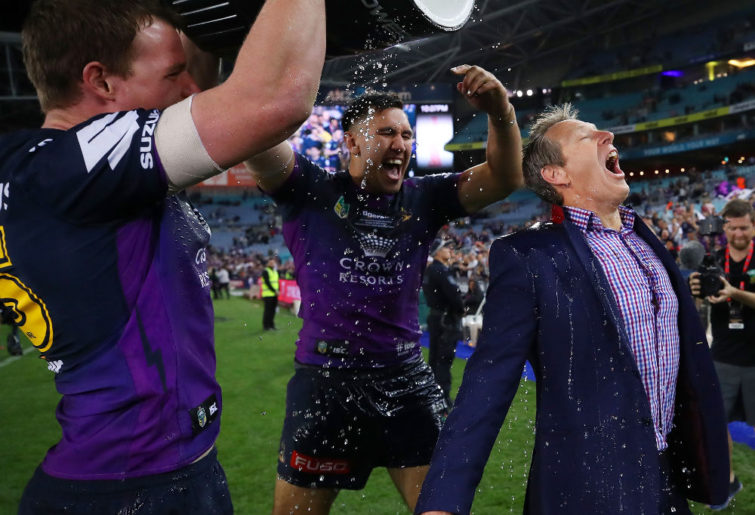 For more than a decade Bellamy has been making water out of wine – coaching up players unwanted at other clubs and transforming them into strong first-graders. But for all the praise heaped on the irascible supercoach, there was always a suggestion that Melbourne’s sustained success was due to their trio of future Immortals.

In 2020, we can put that idea to bed once and for all. While the Cowboys continue to struggle with life after Johnathan Thurston and the Broncos are still searching for the next Darren Lockyer, Melbourne have replaced two of the greatest players the game has even seen without even finishing outside the top four.

The emergence of Cameron Munster, Brandon Smith, Ryan Papenhuyzen and, to a lesser extent, Harry Grant is why Bellamy is the best in the business, and the reason why Brisbane are willing to sell their soul to sign him.

He’s a proven winner and someone to build a club around.

Parramatta Eels: Recruitment model
Parramatta’s roster reminds me of a glamour mansion perched above Wamberal Beach – it looks spectacular from a distance, but you get the feeling that one big swell could demolish it entirely.

The Eels are rugby league’s patchwork quilt, with their squad featuring a veritable zoo of recycled talent. Their captain’s a former Sea Eagle and their playmaker’s a former Tiger. There’s a Panther prowling the centres and a pair Roosters posturing in the pack. And if you look closely, you might even spot a former Bunny laying down in the ruck.

In fact, of Parramatta’s best 17 players, only four made their debut for the club. Outside of the Gold Coast, this would be one of the lowest ratios in the league. This is a shocking statistic for a club always lauded for possessing a nursery rich in junior talent.

The recruitment model is not for the faint-hearted. Time and time again, the approach of signing talent while neglecting junior development has proven disastrous. The Wests Tigers and Gold Coast Titans are the most recent examples of clubs who’ve tried to buy their way out of trouble, only to pay above the market rate for below-average talent.

But while Parra employ a dangerous formula for furnishing their roster, they do deserve credit for assembling one of the NRL’s more talented teams. And they’ve done this by investing in the right players.

It may sound simple, but for a club relying on external talent, hitting on recruitment decisions is critical. A good example is Clinton Gutherson, who was an inexperienced Manly junior coming off a serious knee injury when Parramatta scooped him up. A risky signing at the time, but one that has paid major dividends.

Mitchell Moses is another example. He exited the Tigers in acrimonious circumstances as a player high on potential, low on production and clueless in defence. And while he’s still yet to deliver on the big stage, he represents a significant upgrade over the ragged collection of past playmakers who’ve failed to fit into Peter Sterling’s size 9s.

With the right people calling the shots, the recruitment model can work. But the margin for error is slim. For every Mitchell Moses, there’s a Corey Norman. Get that decision wrong and it can take years for your club to recover.

Sydney Roosters: Premiership model
The Roosters approach team building like it’s a video game. Nick Politis identifies the players he wants, fiddles with a few settings in the options menu, bashes a few buttons, and bam – James Tedesco and Cooper Cronk arrive. In the same off-season. Nothing to see here.

The boys from Bondi cop their fair share of grief for massaging the salary cap, but the true secret of their success isn’t the potent pulling power of Politis — although that certainly helps. What the Roosters can offer that no other club (outside of Melbourne) can match is the chance to win a premiership every season.

In the 20 NRL deciders since the turn of the century, the Chooks have featured in eight. This magnetism the club has for the Provan-Summons Trophy is a major attraction. Young players like Tedesco see the Roosters as the perfect launching pad for their budding NRL careers. Likewise, veterans like Brett and Josh Morris see Easts as their best chance to finish on a high.

Players want to join. They want to be part of successful culture where winning premierships is the expectation. They want all the trimmings that come with representing the most glamourous and well-connected club in the country. And they’re willing to take less money to make it happen.

This is where the Roosters really have an edge. Not only do Brett and Josh Morris — still arguably the best at their respective positions — actively force their way onto the roster, but they do so for less combined money than Blake Ferguson will earn in 2020.

Having quality players willing to sign for less money gives the Roosters unrivalled flexibility to invest in key positions. The result is a roster rich with talent, depth across the park and a superstar spine which makes them a contender every year.

That’s how you sign Cronk and Tedesco in the same off-season.