Forget all the official pronouncements, forget all the justifications. SARU may have gestured globally at the COVID-19 pandemic, it may have pointed the finger southwards at the NZRFU’s “unilateral decision to proceed with a domestic or trans-Tasman competition.”

The cold hard truth is that South Africa’s compass has been magnetically drawn due north for a long time now and New Zealand knew it.

In 2018, Pro 14 boss Martin Anayi was jockeying for the two new South African teams (the Cheetahs and the Southern Kings) to be admitted to European competition.

“Once they start competing and regularly getting into play-offs then they’ve got to play in the [Champions and Challenge] Cup competitions,” he said.

“Whether that’s called Europe is another thing. I just think it would be a really sensible way forward, because we’ve spent quite a lot of time and energy making a meritocracy.”

Pro 14 chiefs already knew that the top South African franchises – Super Rugby’s Sharks, Stormers, Bulls and Lions – would be joining their lesser brethren in Great Britain and Ireland. It was just a matter of time.

If the Cheetahs and the Kings were the apéritifs, the four Super Rugby franchises are definitely the plat principal for broadcasters and sponsors in the UK and South Africa alike.

As Anayi’s comments imply, one of the conditions for any South African move northwards was admittance to European competition, and that ultimately means the inclusion of the Springboks in an expanded Six Nations tournament. That will be the icing on the cake.

In February, it appeared that negotiations on South Africa’s proposed entry to the northern hemisphere’s blue riband international competition were advanced.

The lure of less long-distance travel, with compatible timezones – and hence television audiences – is just too strong a temptation to resist.

There are a deeper set of reasons for the shift. When he was appointed as the Springboks’ coach in 2018, one of Rassie Erasmus’ first actions was aimed at ensuring he had unconditional access to European-based players.

The rule allowing only overseas Boks with more than 30 caps to be selected was canned, allowing for the inclusions of Cheslin Kolbe (France) and Faf de Klerk (England), two of the key players in South Africa’s 2019 World Cup triumph.

Perhaps it was no coincidence that South Africa’s two previous World Cup wins also featured an outstanding scrumhalf (Joost van der Westhuizen in 1995 and Fourie du Preez in 2007) and an iconic wingman of colour (Chester Williams and Bryan Habana). 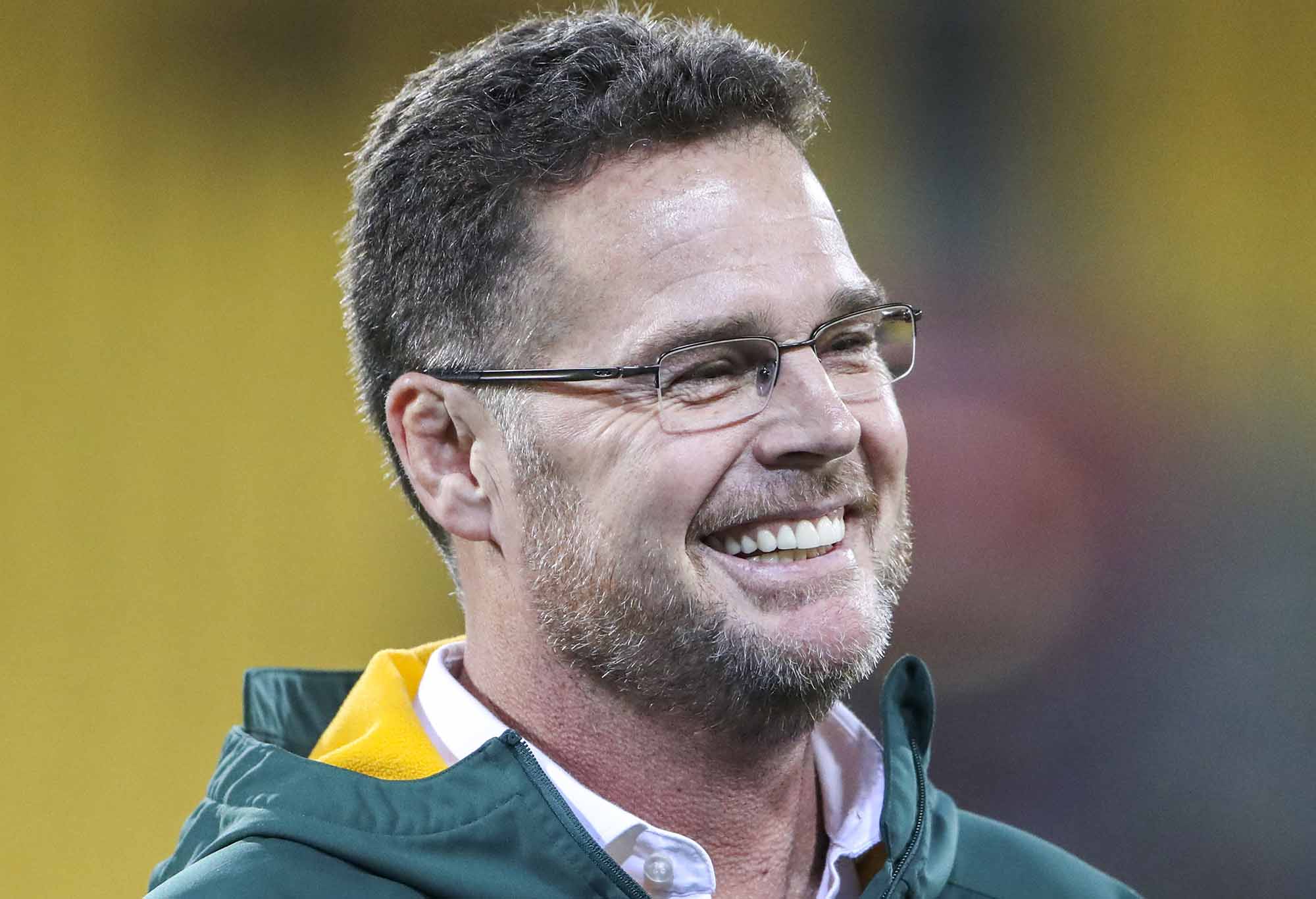 SA Rugby also changed its player-funding model, distributing the payments budget to a much wider pool of players instead of focusing on a narrow range of star names.

“The old system has been in place for a while and it’s been a while since we’ve been successful,” Erasmus was quoted as saying in SA Rugby Mag.

“We’ve done a lot of homework to come up with what we believe will be a more successful model. In the past, SA Rugby contracted between 13 and 20 players with the aim of keeping them in South Africa. Our return on investment wasn’t good enough…

“Losing players to overseas clubs is sad, but we worked it out and it doesn’t make sense to compete with those overseas salaries. We’d rather pay 70 or 80 franchise players and have control of their conditioning, nutrition, game minutes and high-performance programme.”

On the field, Erasmus rediscovered the true Springbok heritage of pressure kicking, unyielding defence and ironclad tight forward play, which had largely gone missing in the spectacular try-fests promoted by the southern hemisphere’s major provincial tournament.

There is no place for death by suffocation in Super Rugby but, historically, that is how the best South African teams win their contests. They grind their bones of their opponents into dust, they don’t run rings around them.

Rassie needed to apply the coaching experience he had gained at Irish province Munster and tap into the knowledge base at English champions Saracens in order to do that. Munster and Saracens have long had an innate sympathy with the South African approach to the game.

Saracens are still built in the image of their presiding spirit, ex-Springbok centre Brendan Venter. After Rassie Erasmus left Munster with Jaques Nienaber and Felix Jones in tow, the Irish province promptly picked another South African, Johann van Graan, to replace him.

Both sides play the game the same way. They concentrate on winning two of the three battles at set-piece and breakdown, they kick the ball in the air off a kicking No.9 (Conor Murray or Richard Wigglesworth) anywhere up to the opposition ten-metre line, and they present a physically dominant defensive line thereafter.

It’s not pretty, but it produces results. Rassie found his kicking No.9 in Faf de Klerk, he found a game-breaker in Kolbe in the back three, and he packed two powerful front fives into a 6-2 bench split. Then he backed Jacques Nienaber to create the best defensive unit at the 2019 World Cup. 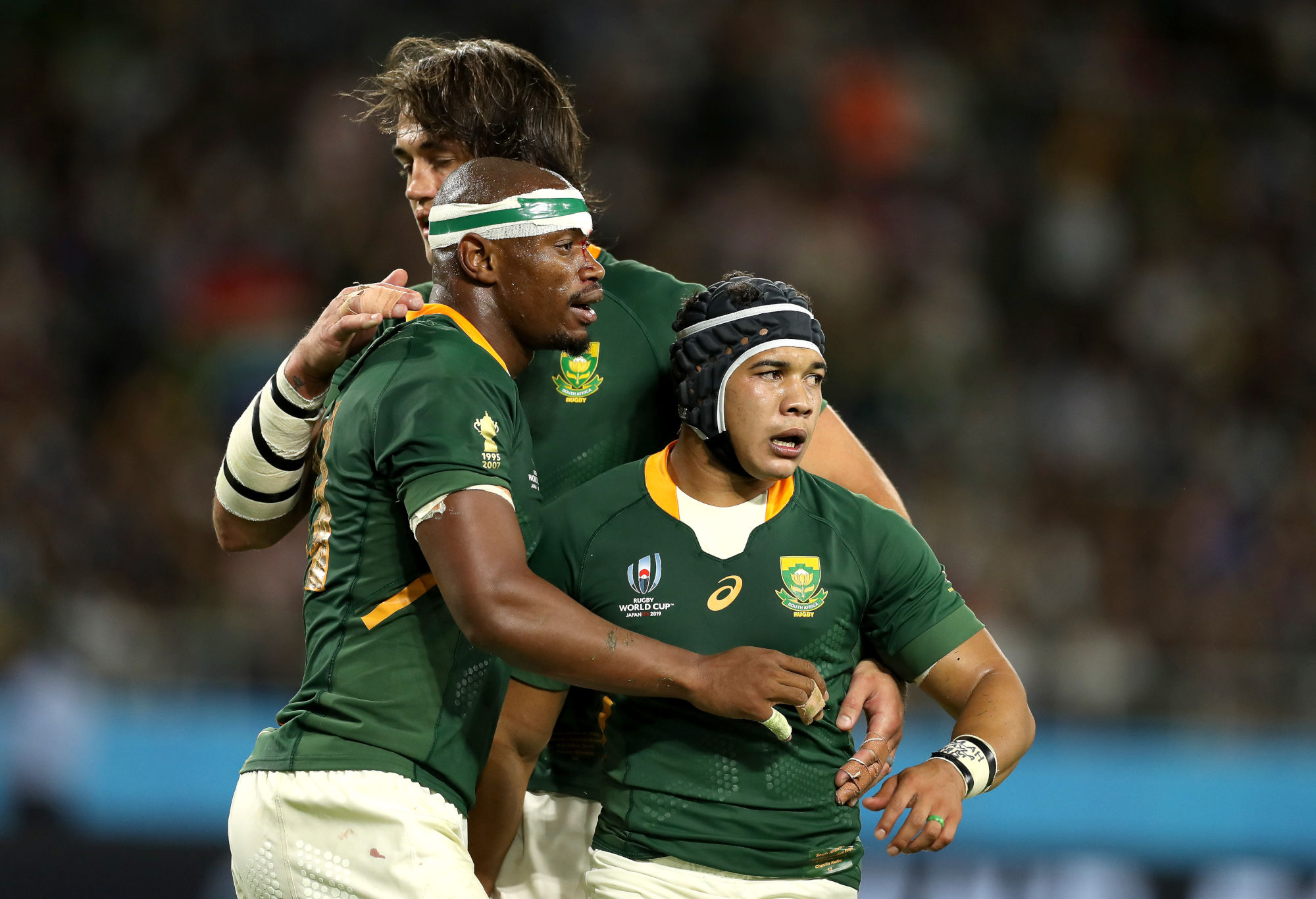 The Saracens connection came good in Erasmus’ selection of Schalk Brits to the World Cup squad. Brits was 37 years old at the time and had spent a decade at Saracens. As a player, he was not ahead of Akker van der Merwe or Chilliboy Ralepelle, but Rassie saw his mentorship value to Bongi Mbonanmbi, the chosen starting hooker in Japan.

“If you look at Bongi and how he struggled in the Currie Cup final, and then four weeks later, he comes off the bench against France, hits five lineouts and scores the winning try,” Erasmus told Matt Pearce of Supersport.

“I think Schalk Brits had a massive role in that.

“Bongi is not a guy who has 50 Test caps. Before a World Cup, to get a guy like him working with a guy like Schalk Brits is great.

“Schalk is not a guy just looking for a position, he is there to help (Mbonanmbi) his throwing, his scrumming and European conditions.”

South Africa won 98 per cent of their lineouts against top-tier opponents at the World Cup, while stealing 20 per cent of the opposition throw. When it came to a scrum contest against Saracens, England and British and Irish Lions hooker Jamie George in the final, Mbonambi was ready, just as he had been versus Ken Owens in the semi-final against Wales.

The hooker is the key to determining the momentum and direction of the drive in this scenario. If he cannot get ahead of his props, break up the bind between his opposite number and the tighthead, and drag his own loosehead through with him, the second shunt will not work.

Mbonambi’s influence is made clearer by the overhead shot of another penalty-winning scrum in the semi-final against Wales.

Mbonambi is well ahead of Tendai ‘The Beast’ Mtawarira and attacking the bind between Tomas Francis and Owens. Eventually, it breaks and Francis is isolated. 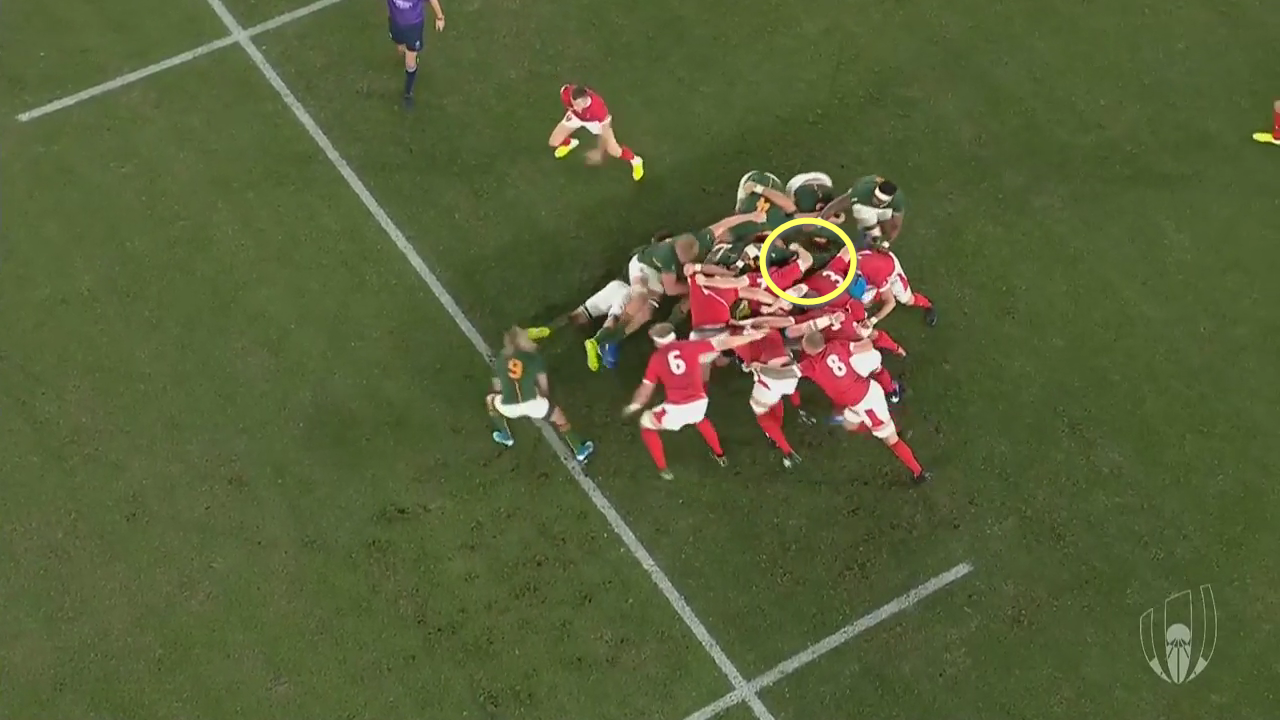 When Mbonambi went off with an injury against England, Malcolm Marx was able to enter the fray and pick up the same thread.

Marx gets ahead of The Beast and breaks the connection between George and his tighthead prop Dan Cole, and that is another penalty to South Africa. England were done too in the final, in exactly the same way that they have done to others over the years.

Erasmus viewed Mbonambi as the starter and Marx as the replacement, despite the fact Marx has been one of three outstanding hookers in Super Rugby with the Lions. While Marx undoubtedly has the more complete all-around game, Mbonambi was in for the dirty work – the accurate lineout throwing, the hard carries to set up the kicking game.

You can add in the brutal cleanout on another Saracen of like mind, Maro Itoje, in the final:

Itoje has good position over an isolated Springbok, but he cannot survive the Mbonambi wipeout.

Erasmus also went north to acquire Kolbe, who was not a Springbok wing of genuine Test standard when he packed his bags for Toulouse. Kolbe’s electric attacking footwork deservedly rings media bells around the world, but it was his work under the high ball and in contact which did not make the headlines – but nonetheless proved to be the real point of difference.

These are the sort of menial, Saracens-friendly tasks which Kolbe is required to perform week-in, week-out for his club – winning the small physical battles against much bigger men.

Summary
Was it really a surprise that South Africa folded its Super Rugby tent to head north? No. Whether the move was right or wrong is impossible to determine at this stage, but it was certainly inevitable in the context of trends in the global game over the past two or three years.

In the larger economic context, it makes sense for South Africa to play in its own time zone, reduce the enormous logistical burdens of Super Rugby, and pool the broadcasting money from the pan-European tournaments to which their teams which will now undoubtedly be admitted.

One of those competitions will be the Six Nations. In the long term, this may support the case for a global season and a full ‘league of nations’ tournament including New Zealand, Australia and Argentina – now that the ice between the two hemispheres has been so categorically broken.

It will also go a long way towards restoring the mystique of the greatest rivalry in rugby history, between the All Blacks and the Springboks. Rassie Erasmus took the South African game back to its ancestral roots at the World Cup in Japan, a game based on defensive defiance, backed by a herd of huge men looking to hurt the opposition if any legal way they could.

The vision of South African teams trying to play a bastardised version of running rugby can be thrown in the waste bin, and rightly so – along with the most recent iterations of Super Rugby.

Up north, South Africa will be kicking, and they will be hitting anybody foolish enough to be underneath the stampede of hooves when the ball comes down. And they will be doing it all quite unapologetically, without even the hint of a smile.

The contest between two different visions of the game will, at last, be fully and vividly alive – the Springboks looking to kick and hit and hurt, the All Blacks and Wallabies running and passing for their lives. That is, after all, just as it should be. Nothing else will do.