Manly have been one of the most consistent NRL teams, winning a premiership in every decade since the ’70s. So it’s no surprise they have had some great players to make a team.

1. Graham Eadie
20 caps for Australia, one cap for NSW, fullback of the year, Rothmans Medal winner
It was extremely difficult to leave out Brett Stewart but Eadie pips him with his rampaging running style and ball skills. Eadie beat the Sharks all by himself in the 1978 grand final, was an accomplished goal kicker and was a key figure in the ’70s Kangaroos team.

2. Dale Shearer
21 caps for Australia, 27 for Queensland
I was tossing and turning with Tom Trbojevic, but Trbojevic isn’t as good on the wing. Shearer is the third leading try scorer in Origin history. He was a savvy try scorer. He was probably Manly’s fastest ever player who excelled anywhere in the back line. Despite a messy exit at Manly, Shearer’s bevy of stupendous tries earn him a spot.

3. Bob Fulton
35 caps for Australia, 16 for NSW, RLW player of the year
Fulton, who is one of the Immortals of rugby league, used his amazing ability to read the game and had blistering pace and upper body strength to make breaks with ease. It seemed at times Fulton could score whenever he pleased. He was the greatest player to play for Manly.

4. Jamie Lyon
Ten caps for Australia, eight for NSW, four-time centre of the year, three-time RLIF centre of the year and Man of Steel
Lyon has been the best centre for the last five years. He has a great knack of setting up his winger and great touch and poise. Lyon has an unusual chubby body shape, which made him hard to tackle. He has been the driving force behind Manly’s success in the 2000s.

5. Michael O’Connor
18 caps for Australia, 19 for NSW, three-time centre of the year
He played centre for Manly but on the wing for rep teams. O’Connor was a dual international. He had great evasiveness and his chip and chase made him one of the most talented backs ever seen.

6. Cliff Lyons
Six caps for Australia, six for NSW, two-time Dally M Medal winner, RLW player of the year, Clive Churchill medalist, two-time five-eighth of the year
Lyons was a Brookvale favourite and he won multiple awards despite not playing many rep games. He found a way to set up his teammates, most notably Steve Menzies. Lyons also used his weaving runs to score some great tries. 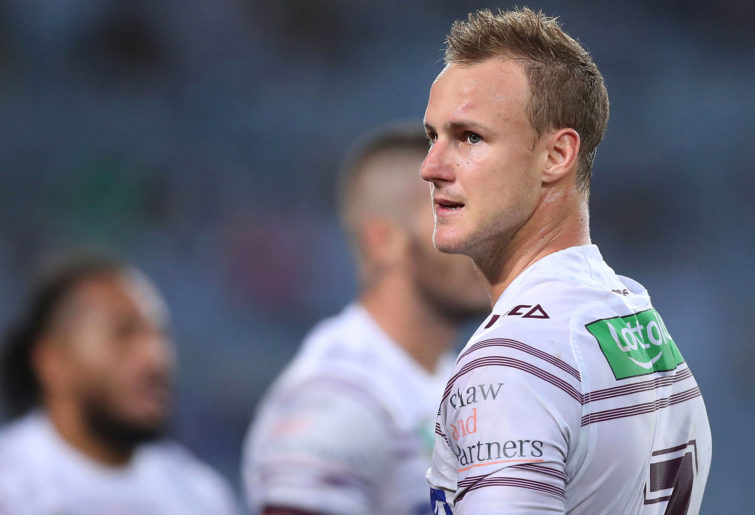 8. Roy Bull
23 caps for Australia
Bull played like a bull. He had a hard, straight running style and was heartless at times when it seemed like he really wanted to hurt his opponents.

9. Geoff Toovey
Ten caps for Australia, 16 caps for NSW, hooker of the year
Toovey played with immense passion and heart. His small frame made him elusive and he had great spark in attack. He played like he was six foot three and 120 kilos. Toovey played well above his weight and was not scared of taking on players much bigger then he was.

10. Mark Carroll
12 Tests Australia, seven for NSW
Carroll was a key player in Manly’s team in the late ’90s. His total lack of self preservation and aggression made him a real force. His iconic feud with Paul Harragon, which culminated with a classic car crash collision off a kick-off, encapsulated him as a player.

11. Terry Randall
11 caps for NSW
Randall was the hardest hitter in the ’70s. He was a very aggressive player who inspired Manly to play smash-mouth footy and he was also a rock in defence.

12. Steve Menzies
13 caps for Australia, 20 for NSW, rookie of the year, three-time second rower of the year, lock of the year and Brad Fittler medal winner
He was a Manly legend. Menzies showed the makings of a class player from a very young age. Menzies had great support play and ran the perfect lines off Cliff Lyons and was very good in defence.

13. Malcolm Reilly
Nine caps for Great Britain
He was a fiery Pom who had a rare mix of aggression and ball playing. He was also known for his kicking game, which is uncommon for a lock. He led Great Britain to many victories over Australia.

The depth that Manly possess made it so hard. The forwards in Reilly, Carroll, Bull and Randall are all cut from the same sort of cloth – or should I say steel – and all were more than happy to turn the game into a street fight.

The backs are highlighted by the Immortal Bob Fulton. The classy Jamie Lyon and O’Connor make a very skilled pairing. The halves of Lyons and Cherry-Evans are both great at taking on the line and putting other teammates into space.

This team is formidable from top to bottom. These Silvertails have by far one of the strongest lists.