Cross-coder Courtney Webb focused on game against the Thunder

Courtney Webb is originally from Tasmania and played for Tasmania in the 2019-20 WNCL season.

Earlier this year, Webb made the decision to move to Adelaide while still playing for the Melbourne Renegades in the WBBL. After being in Tasmania, Adelaide and Melbourne this year, Webb is now in Sydney with the rest of the WBBL players in the hub.

That’s quite a bit of travel, but it is something that Webb is used to.

“I grew up in Tassie and spent a lot of time growing up, but then I had to move to Melbourne to play AFLW when I was 17,” said Webb.

“That’s when I got my foot in the door with the Renegades. I was good friends with Tim Coyle who was the coach at the time. He invited me along to a couple of training sessions.”

While Webb didn’t get a contract that first year, she was back in Melbourne the following year and that was when she was rewarded with her first WBBL contract. At the time, Webb was still playing in the WNCL for Tasmania and also playing AFLW for Carlton.

Women that play more than one sport are common and are becoming increasingly more so. Many people recall that Ellyse Perry played for the Matildas while at the same time played for the Australian women’s cricket team, but there are countless other examples.

For Webb, the time she juggled both sports at the same time was tricky, but like many other athletes she found that her various teams were willing to work together to help her succeed. Fortunately, according to Webb, the strength and conditioning components of both sports complemented each other but it took strong communication between three separate clubs in three separate states.

“My first year was probably the hardest because I was also finishing Year 12,” said Webb.

“At that point I had a state contract, not a WBBL contract, but then got drafted in the AFLW at the end of that year. I missed a lot of school, probably about ten weeks of my final year.

“The football experience was so much fun. I think you gain a lot from being in a different professional environment and seeing how other people and teams operate.”

While in men’s sport, code wars are an inflammatory topic, for women who are still pushing toward becoming full-time professional athletes, Webb thinks the opportunity to compete in multiple sports is a benefit.

“You want to encourage people to play as many sports as possible especially when they are young,” said Webb.

“The opportunities we are able to get are awesome and you should take them with both hands if you get the chance.”

Webb has pressed pause on her AFLW career for the moment but still loves her footy and is hopeful that perhaps after cricket she can come back to the sport.

At the moment Webb’s focus is solely on her role in the Melbourne Renegades’ middle order. 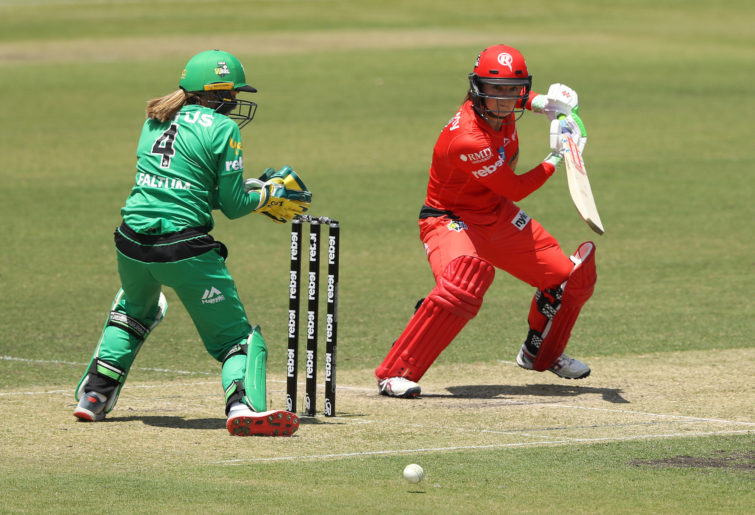 Webb has had a positive start to WBBL06. Unfortunately, just like the other teams, the Renegades’ opening couple of matches were impacted by rain. In the three innings Webb has played she has scored 33, 21 and four.

In those opening games, the Renegades’ batting line-up has struggled to score, with their highest total being 119 against the Sydney Sixers.

For Webb, the focus ahead of the games on the weekend is consistency. This is something several WBBL teams are struggling with and it’s no surprise given how disrupted the start of the season was due to rain, especially after such a long off-season and pre-season.

“We want to put a full game together,” said Webb.

“Our bowlers performed well in the first couple of games but our batting has let us down. We are hoping to fire from ball one, play with confidence, take good risks and try to build a strong total that our bowlers can defend.”

Webb is also looking to learn and develop her skills as a middle-order batter.

“I’ve been in a couple of tricky situations coming in in the middle order after losing some early wickets,” said Webb.

“Batting through the middle order you are presented with so many different situations and it can chance every game. You have to be versatile and be able to adapt in that role and I am still learning what that looks like for me.

“I want to get my strike rate up, play with some more freedom and take some lessons from Georgia Wareham, who is absolutely on fire with the bat right now.”

The Melbourne Renegades’ next game is on Saturday, November 7 at 2.30pm AEDT against the Sydney Thunder at Hurstville Oval.