For the first time since its inception, Super Rugby will be shown live on free-to-air TV under a new broadcast deal announced by Rugby Australia and the Nine Network today.

Under the three-year agreement, which has an option for a further two years and is worth over $33 million annually, Nine will show each Saturday night Super Rugby game plus all finals live on one of its TV channels from 2021, as well as all Wallabies and Rugby Championship Tests.

All Super Rugby matches will be shown ad-free on streaming service Stan under the newly-created banner of Stan Sport, which was launched today by Nine Entertainment. They will also host all Shute Shield and Hospital Cup games, plus Super W, Super Rugby Aotearoa, the Mitre 10 and Currie Cups, and Tests played in New Zealand, South Africa and Argentina.

Rugby AU interim CEO Rob Clarke confirmed that at least four regular-season Shute Shield and Hospital Cup matches will also be shown on free-to-air TV, as well as one match per round of finals per competition. 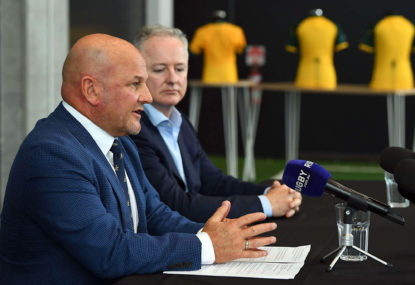 What won’t be shown in 2021 is the mooted State of Union competition, which was promoted by Rugby AU in their initial broadcast offering. However, it is one of a number of “new assets” the governing body and Nine will work on creating from 2022. Women’s and men’s sevens tournament were also mentioned as potential future additions.

While the deal is currently only an in-principle agreement pending SANZAAR approval, that is expected to be little more than a formality.

Super Rugby’s competition structure next year is yet to be confirmed, however 2021 will likely see a repeat of Super Rugby AU with an additional trans-Tasman element between its best teams and the top sides from New Zealand’s Aotearoa competition.

The new arrangement will end Foxtel’s long tenure as the main rugby broadcaster at the end of the Tri Nations. The organisation did submit a bid to Rugby Australia to retain the rights, believed to be in the $30-40 million range, but the increased exposure offered by having Super Rugby on free-to-air TV helped seal Nine’s offer.

It will result in fans who subscribe to Fox or Kayo Sports solely for rugby switching to Stan. With 2.2 million subscribers as of August, the streaming provider currently costs between $10 and $19 per month. It is not yet known what their sport offering will be priced at, although it will be an add-on rather than included in their current subscriptions.

Regardless, the creation of a dedicated sports offshoot will see the organisation bid for the rights to show more codes in competition with the likes of Kayo Sports. In a statement released on Monday morning, Nine said they will “look at other opportunities to invest in a range of additional exclusive sports rights, either on a pay or cross-platform basis”.

Nine broadcasts the Australian Open, so could show some of the tournament on its new platform, particularly in the first week when the sheer volume of tennis is impossible to fit all on three channels. It also holds the rights to Super Netball, and this year showed three games per week live on TV and two on free streaming site 9Now. 9Now also had full replays of every match.

Rob Clarke hailed the agreement, labelling it a “fantasy” and a “landmark deal”.

“Rugby has found its new home on Stan and the Nine Network, with broad reach on free-to-air television as well as ad-free, extensive access on the Stan platform,” Clarke said.

“The fantasy has become a reality for the Australian rugby community. This is a landmark deal that includes everything in the showbag, and it gives more Australians more access to more rugby than ever before. Australian rugby is transforming with an exciting future ahead, and this innovative partnership enables us to fast-track that growth from the grassroots up as well as showcase and promote the game like never before.

“We’re particularly pleased for Super Rugby to be live on free-to-air for the first time in its history. We’re also thrilled to partner with streaming service Stan, which now boast more than two million Australian subscribers and are growing at a rapid rate. We’ve recognised that the broadcast landscape has changed, and we’re changing with it.

“Nine and Stan have also made a commitment to our women’s game, both at a domestic and international level. Rugby Australia is passionate about the growth of the women’s game in Australia and we look forward to working closely with them to showcase our competitions and talented players as well as encouraging more women and girls to pick up a rugby ball.”

Both Clarke and chairman Hamish McLennan thanked Foxtel for their 25-year partnership.

A long-time broadcaster of sport, Nine boss Hugh Marks said his organisation will use that experience in their rugby coverage.

“We will bring all our collective expertise from decades of experience in live sport broadcasting to deliver the best possible outcomes for viewers, rights holders, and the growth ambitions of the sports we partner with,” Marks said.

“At Stan, we are focused on bringing Australians the best local, international and original programming, which has seen our audience reach significant scale.

“Today’s announcement will see us extend that offering through the launch of our live streaming capability, bringing live sport to Stan in 2021 and opening up a range of new programming opportunities. Our partnership with Rugby Australia is the perfect place to start this new business.”