Written off by just about everyone before the series started, the Queensland Maroons sealed a memorable Origin victory by winning Game 3 20-14 in Brisbane.

The six-point margin wasn’t a true reflection of the home side’s dominance – it was something of a miracle that they only managed to score 20 points.

Here’s how each of the victorious Maroons rated.

5. Corey Allan: 5/10
Not a standout debut performance for Allan, although he won’t mind too much given the result. Did throw the last pass for Valentine Holmes’ opener and worked his way into the game as it went on, but made a couple of first-half errors – one of which gifted NSW a try – and then had his night ended early for a professional foul on Josh Addo-Carr, when he was lucky to not give away a penalty try.

19. Edrick Lee: 8
Unlike Allan, Lee had an excellent debut. Ran strongly to get Queensland’s sets off to strong starts, defended well, and showed a calm head to grab a crucial try at the end of the first half.

21. Brenko Lee: 7
Another strong debut from a Mr Lee. Like Edrick, Brenko defended well and made some strong runs when given the ball.

4. Dane Gagai: 7
Gagai doesn’t know how to have a bad Origin game, and he was his usual assured self in the Maroons jersey in the decider, particularly in attack.

1. Valentine Holmes: 4
Great finish to open the scoring but would have had another had he not juggled the ball before halftime, and then went ahead and bombed two absolute gimmes after the break. At least he kicked accurately from the tee.

6. Cameron Munster: 9
Just phenomenal. Munster made up for lost game time in Origin 2 with one of the great performances in a decider. His kicking was excellent, his running threatening, and his repeat involvements to set up Queensland’s second try were unreal. A deserving player of the series.

7. Daly Cherry-Evans (c): 7
The skipper played a supporting role for his more dominant halves partner, but Cherry-Evans was still a controlling influence on the game.

8. Christian Welch: 8
A big effort from the returning prop. Welch was strong all night in both attack and defence, a reminder of what a loss he was for Game 2.

9. Jake Friend: 6
Friend was typically industrious in defence, but the Maroons looked far better in attack when Harry Grant was running the show from dummy half.

10. Josh Papalii: 8
Papalii put in a huge first stint in the opening 20 minutes, and was quickly thrown back into the action – a far cry to his long time on the pine in Game 2. An important part of the dominant Queensland pack.

11. Felise Kaufusi: 8
Kaufusi had an off night in Sydney but made up for it in the decider. Made every single one of his 35 tackles and was able to surge through contact when running the ball. Was lucky not to be sin-binned late on though.

3. Kurt Capewell: 7
Looked comfortable in the second row after playing in the centres in the first two games of the series, and while he didn’t have the eye-catching impact he did in the opener, he was solid all night. 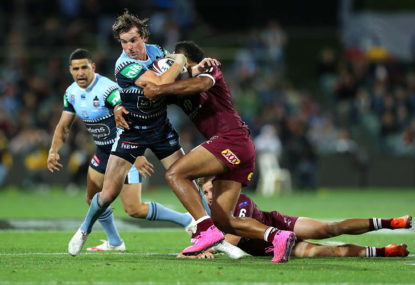 13. Tino Fa’asuamaleaui: 8
Fa’asuamaleaui is going to play an awful lot of Origins for the Maroons. He was the leading metre-eater in the Queensland pack, and only Welch made more tackles than him – and only by one on that count.

14. Harry Grant: 9
A truly remarkable Origin debut. Grant came on after less than half an hour and changed the game with his outstanding service and running out of dummy half. Queensland looked far more dangerous with the youngster on the park, and he deservedly grabbed the game-sealing try. Blues fans might have enjoyed not worrying about a world-class hooker wearing maroon for the last few years, but those days are now over.

15. Lindsay Collins: 8
Hasn’t taken a soft run all series. Collins was damaging off the bench once again, one of the best forwards on the ground.

16. Jai Arrow: 6
Put in a decent stint, but Arrow’s game will be remembered more for roughing up a severely concussed James Tedesco when the Blues skipper was prone on the ground. A low act.

12. Jaydn Su’A: 6
Only spent 13 minutes on the ground, but didn’t do anything wrong in them. Made a crucial tackle when Isaah Yeo broke the line late in the game.