The bluster of the Pies

Something that has ceased to amaze me is how easily fans can be spun.

On Monday morning, Gerard Whateley interviewed Nathan Buckley on SEN regarding the exodus at Collingwood.

Buckley admitted that the players were traded out due to salary cap pressure, and that because of Collingwood’s lack of leverage they weren’t able to get market value.

Immediately across social media, fans praised Buckley for his honesty, and asserted that it should’ve been Buckley who spoke to the masses after the trade period closed, rather than Ned Guy that evening, and Geoff Walsh the next morning.

I guess everything’s okay then.

Great, Buckley was honest. But his honesty doesn’t alter the fact that two senior members from Collingwood’s footy department tried to sell different messages to the public, claiming the trades weren’t primarily motivated by a salary cap issue.

Also, let’s consider that both Adam Treloar and Jaidyn Stephenson condemned Buckley’s communication with them. Buckley’s honesty in the Whateley interview doesn’t change that fact.

Nor does it change how Collingwood tried to push Adam Treloar out of the club on the premise he wouldn’t be able to perform at an elite standard in 2021 with his wife relocating to Queensland. 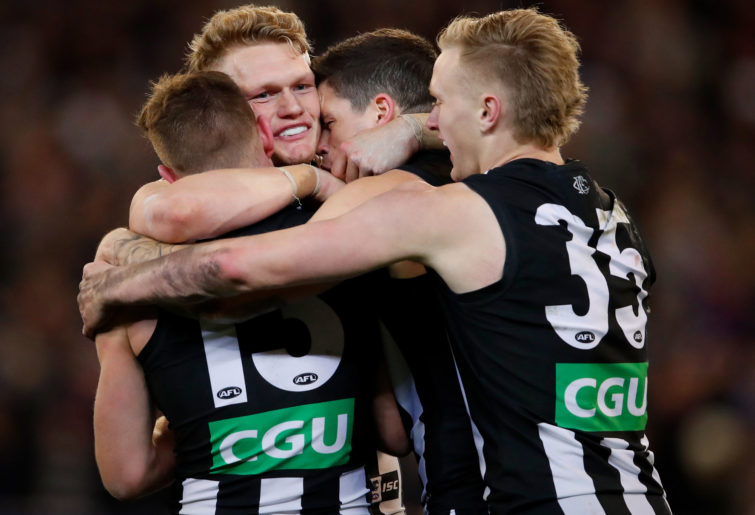 And in no way does Buckley’s interview mitigate how Collingwood managed their salary cap to the extent that after just three successive years of finals, it burst from the seams, and players had to be shed – not just Treloar, Stephenson and Tom Phillips this year, but also James Aish last year.

Or why the footy department decided to go all in on Dayne Beams, when they must’ve recognised a bloating salary cap and how it would only become more problematic as young guns asked for pay increases.

Or that the club paid overs for Dayne Beams – witness what the Bulldogs paid for Treloar, and North Melbourne for Stephenson, when Collingwood had no option but to offload. Brisbane were eager to move Beams out, yet were able to extract two first-rounders out of Collingwood. Good on Brisbane for exposing Collingwood’s lack of trade nous.

Our standards and expectations must be so low if a little honesty can win us over in face of a cavalcade of disasters.

The truth is Buckley’s interview in no way addresses any of these issues.

All it addresses is the ‘why’ of it.

Although that seems a wavering motivation in itself.

McGuire claimed the media were coming after the club. Why wouldn’t they?

Collingwood forced out a player who they’d spent two pick sevens to acquire, and a Rising Star they’d drafted at pick six. And for what? Pick 14?

And the claim they wanted to go back to the draft to bring in young talent? Isn’t Stephenson – and Tom Phillips, for that matter – just that?

Why wouldn’t the media go after you?

They would be negligent if they didn’t.

“If there’s a criticism it’s that Collingwood have looked after players too good as far as the salary cap was concerned and long-term contracts,” he said.

“And players have been sensational back-ending their contracts to make it happen because there was a window of opportunity.”

Has anybody bought it?

So let’s praise Collingwood for signing players to long unwieldly contracts and overpaying them in a competition that has a strict salary cap?

Well done, Collingwood. You paid players too much, and you signed contracts that were too long, and somehow that didn’t work out for you.

This is like saying it was a good idea for the Titanic to hit the iceberg as it gave them a chance to test out that they had too few lifeboats.

They shouldn’t be allowed to spin this.

And if you’ve started to get over it, get back under it.

This was a failure of governance on so many different levels.

Even if Collingwood had been honest with their supporters prior to their draft about needing to cut the list (which I’m not saying they needed to do), and even if Nathan Buckley had handled that first media gig once the trade period had closed, all these issues still exist.

And yet there are some who’ll tell you it’s part of some grand strategy and it’s all okay.

Ned Guy and Geoff Walsh assured us it was about replenishing the list, although if this was the strategy it must’ve been recently concocted given Collingwood, by their own admission, didn’t consider moving Treloar on until his partner had signed with the Queensland Firebirds. 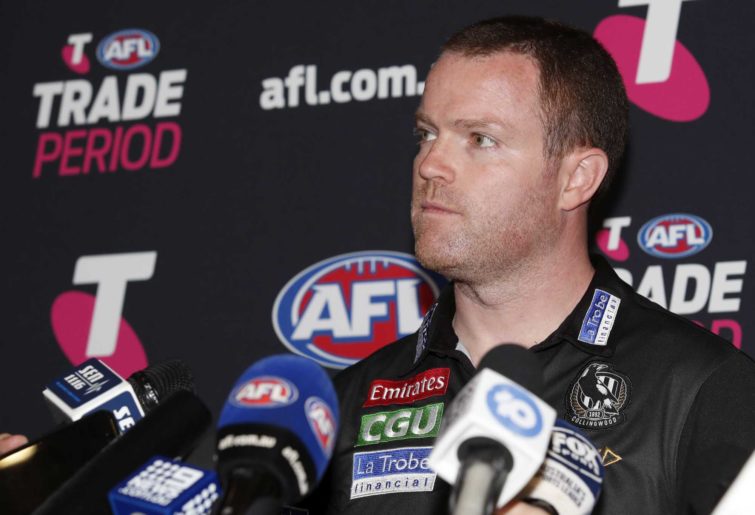 Then there’s the simple truth that for all the trade finagling, Colingwood have come away with just the single pick 14, while losing a swath of middling picks. How exactly does one additional low first-rounder help you replenish the list?

Mark Anderson assured us it was about creating space so we could court free agents, although this sounded like a loose assertion to try find some justification that might appeal to everybody.

We also don’t know how the treatment of Treloar might’ve damaged Collingwood as a potential destination. If I were a player on the outside looking in, I’d be distrustful of signing any big contract with Collingwood after all this.

Nathan Buckley admitted it was a means to get all the hurting out of the way with the salary cap, although they remain obligated to Dayne Beams for the next two years, and Adam Treloar for the next five.

Rumours abound that they are also paying a portion of Tom Phillips’ contract at Hawthorn. What about Stephenson? Are Collingwood also paying part of his contract at North Melbourne? Can the club answer these queries?

Also, given all the impromptu salary cap juggling and rejigging, are we certain that Collingwood will be clear of any salary cap breaches?

But, don’t worry, because according to Eddie McGuire, this is all just a pivot – a necessity to reevaluate in the shifting AFL landscape.

If it’s a strategy, how is it the five principle figures at Collingwood cannot agree on the message?

The biggest defence of the trading so far comes from a handful of the fans: the three players in question – Treloar, Stephenson and Phillips – had substandard returns in 2020, and given the money were on they were expendable.

Really? Players are judged on a single season, despite the body of contrary evidence behind them?

I guess Brodie Grundy and Jordan de Goey should watch their backs in case that second trade period is introduced.

Otherwise, the biggest counters are as sophisticated as “Get over it” or “It’s done – let’s look forward to 2021” or “Wait and see.”

Just loose airy generalisations that have no basis in logic and all fall back on that good old black and white patriotism. And out comes the condemnation if you don’t agree. You’re not a true supporter. Or you don’t get it. Or you’re an idiot.

Look around. It’s not just me questioning this, but ranks of Collingwood supporters, as well as numerous media analysts.

Do we all have it wrong?

Do people who don’t even support Collingwood in the media – such as David King and Garry Lyon – have it wrong for questioning what’s happened?

Are we wrong to keep asking questions?

Just to reiterate: this isn’t about trading out players, but the mess that surrounds it on so many different levels.

Instead of any genuine examination of it all – and there’s a lot to untangle – the answer is trust in blind faith. Hmmm. Okay.

I might just go answer that email I got today about inheriting $500,000,000 from that distinguished UK banker who addressed me as “Dear Sir.”

As a Collingwood supporter, what disheartens me is the way the club has cycled through various tacks, ranging from stonewalling, to diplomacy, to forthrightness, to bluster, and now most recently with empathy as Eddie McGuire tells he’s not just an elected official, but a supporter like the rest of the us, and he’s hurting too, damn it!

Maybe Collingwood will sacrifice some administrator to appease supporter outrage (although that would surely be an admission of culpability), but when you examine the process of how this occurred, why it occurred, and how it was handled, the reality is simple: this is bigger than one individual.

And instead of spin, bluster, and the typical call to arms, how about Collingwood demonstrate some genuine accountability?

This was just not good enough.