Nicole Faltum has been part of the Melbourne Stars since WBBL03, but hasn’t had the chance to feature in a finals series.

That will all change in WBBL06.

With two games remaining in the regular season, the Stars sit on top of the ladder, with 19 points, and are the only team assured of playing in the finals.

“It is incredible,” says Faltum.

“It feels so good, especially coming off the back of last season and only winning the two games.

“It has completely flipped and we are so pumped to be in the finals for the first time.”

Until this season, the Stars were the only team not to feature in the finals, which demonstrates the evenness of the competition and how widely talent is disbursed across the country.

For the first three years, the WBBL trophy remained in Sydney. That changed in WBBL04, when the Brisbane Heat won their first title and if things go to plan, the Stars will bring the trophy to Melbourne for the first time.

The Stars had significant changes leading into this year, as Lizelle Lee, Katey Martin and Kristen Beams made the decision to retire.

But the team were busy in recruitment, luring national skipper Meg Lanning back home, as well as recruiting Natalie Sciver and Katherine Brunt.

But the impact of those players who are no longer with the club has not been forgotten.

“It’s kind of sad that Kristen Beams isn’t around to enjoy it with us, but I know she would be so bloody proud,” says Faltum.

It also helps that the team gets along.

“Everything has just worked. When things are working it’s hard to say why sometimes,” says Faltum.

“Our team vibe has been great. Everyone is so chilled out and everyone is really enjoying it. We are genuinely having so much fun.

“We keep reminding each other why we play and it’s because it is so much fun and we love it. That has been a huge change this year.”

While hub life has been challenging, with Faltum having to reduce her hours at work and do a couple of weeks in quarantine, it has also given her the chance to spend plenty of time with her cricket mates, particularly Annabel Sutherland, Sophie Molineux and Georgia Wareham. 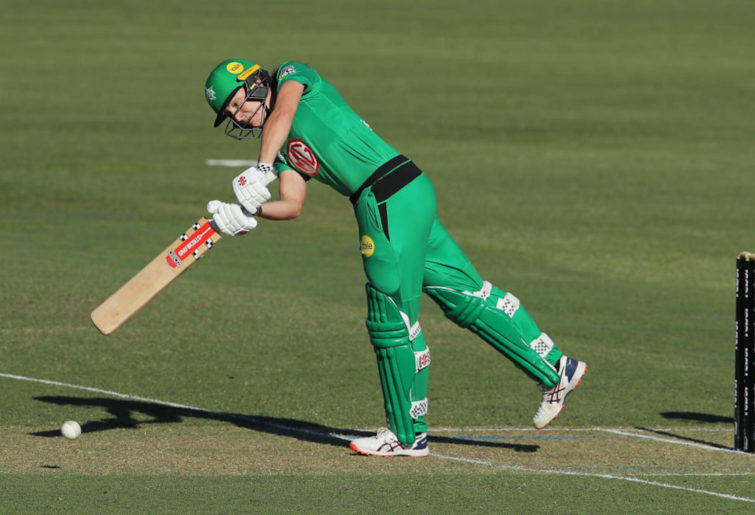 Annabel Sutherland of the Stars (Photo by Matt King/Getty Images)

Faltum has also developed a close bond with Elyse Villani this summer.

“We joke that we are twins but 11 years apart,” she says.

“She was a role model for me growing up and now knowing her and developing a friendship with her has meant a lot to me. She teaches me so much about cricket and life in general which is really special.

“She is such a good person and she doesn’t think of the impact she is having on other people, because by being herself she has such an impact on the team and those around her.”

As a wicketkeeper, Faltum has also had the chance to get up close and personal to Brunt – both the person and the bowler.

“It’s so interesting how personalities can change once they cross that white line,” says Faltum.

“When you see her on the field, you think she is a big, scary person, but she is so soft and caring off the field.”

Faltum had long admired Brunt’s aggressiveness and passion on the field, and was excited to learn from the English quick from behind the stumps.

“I love keeping to new people, it is always really exciting,” she says.

“In the last couple of games I have come up to her to stop people walking at her and it has worked really well.”

Upon reflection, Faltum’s biggest learning this season has been developing resilience. For Faltum, the challenges of 2020 have given her the chance to really get to know her teammates and feel more connected.

“It’s been a tough season,” she says.

“But it’s one that I’ll always remember. And it’s not over yet.”