Proteas explain why they won't be taking a knee

South Africa’s squad to face England in a six-match limited overs home tour have released a joint statement elaborating on their decision not to kneel before the games.

The issue has marred South Africa’s return to international cricket for the first time since March and created debate over whether the squad should be seen to be more publicly supportive of the Black Lives Matter movement.

“Over the last six months, the Proteas team has engaged with honesty, empathy and vulnerability in exploring together what anti-racism work looks like and why this work matters so profoundly in this cultural moment,” the statement on Wednesday said.

“As a team, we have unanimously chosen not to take the knee at the upcoming matches, but to continue to work together in our personal, team and public spaces to dismantle racism.

“This decision was taken by the team collectively, after deep dialogue and attentive consideration. This is not a decision compelled on us by either our management or our coaches.”

The players also called for less “sowing contention around our decision” from the media.

“We respect the right of the media to hold the team accountable as citizens. We ask though that in doing so the media not threaten the journey we have embarked on, the trust we have built, and the work we are doing by sowing contention around our decision.”

England have also confirmed they will not take a knee, having not done so since August.

The first of three Twenty20 Internationals will be played at Newlands on Friday. They will be followed by three 50-over matches.

South Africa’s most experienced player Faf du Plessis, preparing for the Pakistan series, is concerned that ‘bubble’ life for players is simply unsustainable. “We understand that this is a very tough season and a tough challenge for a lot of people out there, but if it’s back-to-back-to-back bubble life, things would become a big challenge,” […] 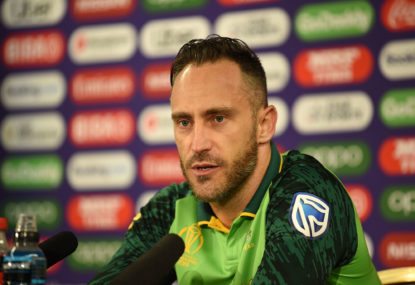