The patient wait continues for a vaccine to counter the most subversive affliction known to mankind, with hopes high we’ll get one for coronavirus too.

Public pressure has re-emerged for a cure against dodgy rugby league player agents, with the wheelers-and-dealers again holding the entire game to ransom despite only agreeing to six per cent.

Despite a period of relative peace, the game has been forced to feverishly explore ways to inoculate itself against fabricated claims of player revolts and “doing what’s best for your family”, with mooted strategies including industry reform and cancelling agent accreditation, despite some having no credit whatsoever.

Once a vaccine is discovered, authorities have given assurances it will be rapidly allocated to society’s most vulnerable and infirm, such as the Wests Tigers or anywhere with a squanderable war chest.

Thanks chiefly to the spat between the joint venture and want-away forward Josh Aloiai, confidence in contracts has plummeted to five-year lows, with market analysts declaring their value could even be lower than the paper they are written on.

For those unaware, Aloiai has agitated for an early release to take up an increased offer with Manly by vowing to “never wear the jersey again”, which means he’s either sick of the Tigers, or the club’s fervent love of a change strip. 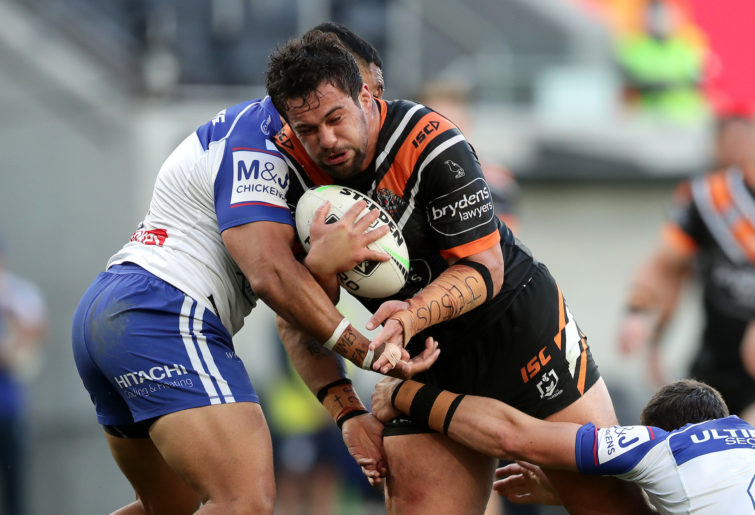 Josh Aloiai wants out of the Tigers. (Photo by Mark Metcalfe/Getty Images)

This saw club chairman Lee Hagipantelis fire back with threats to make the restless Aloiai mow the club’s lawns, which the 25-year-old joked about before realising this includes 15 home grounds across ten municipalities, and probably standard working hours.

However, Aloiai is reportedly refusing to budge, citing the Tigers’ generous workplace relations policy, which is known for entertaining contracts of service that pardon service, and employee protections against commitment and training too hard.

The role of the player agent has evolved over the years, with negotiating a fair wage and a few Tooheys ads making way for dicey third-party agreements and thunderous back-ended deals permitting their clients’ freedom to walk and/or blame Raelene Castle.

This has further morphed into concocting luxurious exit clauses, with the modern player commonly authorised to break a deal simply for better money, fullback money, or under-the-table money, or by simply being a jerk.

In defence of the industry, however, the majority of player agents aren’t subterranean shysters. Some are actually unaccredited recluses, while the rest are usually woefully under-qualified, as evidenced by Latrell Mitchell’s shrewd hard-balling by playing hard-to-get for less money.

Additionally, opting against an agent’s dishonesty and subterfuge has also been known to backfire, with loyalty costing Josh Mansour, and the lack of a manager leaving the public with stifling Joseph Suaalii fatigue.

Recent investigations by the NRL have seen crackdowns on the industry, with sanctions hung on prominent names like Gavin Orr and Isaac Moses after somehow growing to control more clubs than Justin Hemmes.

But despite early encouraging signs, the scourge has seemingly flared again with some no longer even bothering to falsely leverage “compassionate grounds”.

With no cure for over a century, society may need to comply with the new normal of back flips, blackmail, the loss of John Bateman and the subsequent validation of The Daily Telegraph, and all the other achievements that endear player agents to their industry.

Until a solution is discovered, clubs will remain under lockdown of the game’s official chairman of recruitment and retention, Phil Rothfield.