It’s a cold fact which is hard for the more idealistic, attack-minded coaches to swallow. Pragmatism is in the ascendant in top-level rugby, and that means more kicking, and more defence. These days, you can make a very decent living without the ball.

Rebels head coach Dave Wessels, who is currently trying to run a possession-type attack down in Melbourne, summed it up neatly in a crisp article for The Roar at the end of last week:

“Athletes are bigger now. More athletic. And the analysis systems available to us are more pervasive than they have been in the past. As a result, space on the field has become limited and defence is winning.

“Eddie Jones’ England are the best team in the world right now. And I admire what Eddie has built. But they kicked 68 times in the last two Tests and made 201 tackles (versus 76) to easily beat Ireland.”

The law tweaks at the breakdown, which were supposed make the game quicker and give defences fewer opportunity to reset, have snapped back angrily at their designers.

Now, the offensive cleanout is just as likely to be penalised as the defender. Within the first half-hour of the game between Argentina and Australia at Paramatta, one player from each side had been sent from the field for illegal contact to the head.

The defender shifts his centre of gravity as low as possible in order to steal the ball on the ground after a tackle is made, and that gives the cleanout a narrow target when approaching the ruck. Avoiding any kind of contact to the head or neck makes it even more difficult to engage accurately. For the attacking support player, it really has become an exercise in threading the needle at collision speed.

As Wessels rightly pointed out, England are the best team in the world right now – at least of the sides actually playing international rugby. It might be different if the Springboks were around, but that wouldn’t change the direction in which the game is travelling. On the contrary, it would reinforce it.

Jones used to be one rugby’s offensive idealists, but he has been converted to a new religion, at least in the short term.

“Just looking at rugby at the moment it’s certainly a tough, physical game, a real game for the purists,” the England boss said in the lead-up to last weekend’s Autumn Nations Cup final.

“It reminds me of the 2007 World Cup, where defences were pretty dominant and kicking was one of the major ways to get ahead in the game.

“We go through these periods – the next cycle is always an attacking one, so let’s enjoy the defensive cycle we have at the moment…

“Look at every side in the world now, they’re so much better organised in defence – everyone’s getting off the line hard and time and space are at a premium and unless we are able to get quick ball it’s very difficult to play with any fluency. It’s always dependent on the laws.”

The comparison between the last three games played by England (against Georgia, Ireland and Wales in the Autumn Nations Cup) and Australia (against New Zealand and Argentina twice in the Tri Nations) represents a stark contrast in philosophy.

The difference in approach can be best illustrated by the attitude to selection in the back five forwards. As a basic rule of thumb, you can either select for ball-carrying or for defence in this crucial area.

Dave Rennie’s Australia select primarily for ball-carrying, with Ned Hanigan and Michael Hooper supporting a ball-carrying number 8 in Harry Wilson. Both first-choice second rows (Matt Philip and Lukhan Salakaia-Loto) would also list ball-carrying as one of their primary assets.

England’s back five is built for play without the ball. Joe Launchbury, Maro Itoje, Sam Underhill and Tom Curry are all significant defensive forces in their own right, and Launchbury topped England’s takeaway charts on the deck. Only number 8 Billy Vunipola is probably better with the ball than he is without it.

The comparative stats for the back five forwards on defence make for interesting reading:

English back-five forwards made 61 more tackles than their Wallaby counterparts, at a much higher completion rate – as might be expected given the Wallabies were playing the All Blacks, not Ireland or Georgia. But they also turned over the ball more than twice as much as the Wallabies – once in every 14 tackle attempts, as opposed to once in every 33.

Los Pumas stuck to their guns. Missing their two best forwards (Pablo Matera and Guido Petti), they shifted Marcos Kremer into the second row. Just like Eddie’s England, they pared down their lineout to a minimum and picked two number seven types in the back row together in Facundo Isa and Rodrigo Bruni.

Their back five forwards responded with a colossal effort, making 54 of their 59 tackles at a 92 per cent success rate, with one in every four tackle attempts dominant, and one in every 12 resulting in a turnover. These were England-worthy figures indeed.

Within the first five minutes of the opening whistle, the Wallabies had strung together two long attacking sequences of ten or more phases near the Argentine 22 without making meaningful progress on either occasion.

Argentina focused on holding the ball-carrier off the ground for as long as possible, in order to create slow ball for Nic White at the base:

The time between Scott Sio first entering contact and the ball emerging for White is five seconds, and that is too long. Look at the work from Puma number five Marcos Kremer, first holding the Wallaby loosehead prop up, and then forcing himself towards the ball past Brandon Paenga-Amosa and Allan Alaalatoa at the cleanout.

The lack of penetrative carries and quick ruck delivery generated a host of issues for centre Jordan Petaia in the course of the game:

This is the next play after Kremer’s tackle. The Wallabies try to run their attacking shape and make the second pass anyway, but the defensive line is set and the Pumas are able to account for all of Petaia’s options, both inside and out: 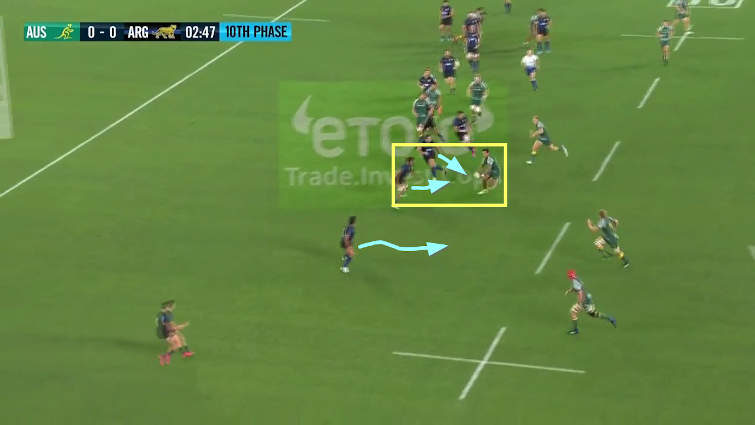 Jordan Petaia took a lot of unwarranted heat from the TV commentary box during the game, but the problems had been created on the phase before the ball was ever released to him.

Petaia spent most of the match trying to make a silk purse out of the same sow’s ear. Two of the preparatory phases on the next sequence were both marked by effective high tackling techniques, and five-second delays in delivery for White:

On both occasions, hooker Julian Montoya and number 12 Jeronimo de la Fuente combine to hold up, and on the second occasion very nearly rob the ball-carrier. The cleanout is rendered ineffective by the Pumas’ ability to stand up in the initial contact and keep the ball-carrier above ground, and that means more unusable five-second ball for Petaia:

In the same stride that he receives the ball, Petaia is faced by a defender right on top of him, with the options to both sides cut off: 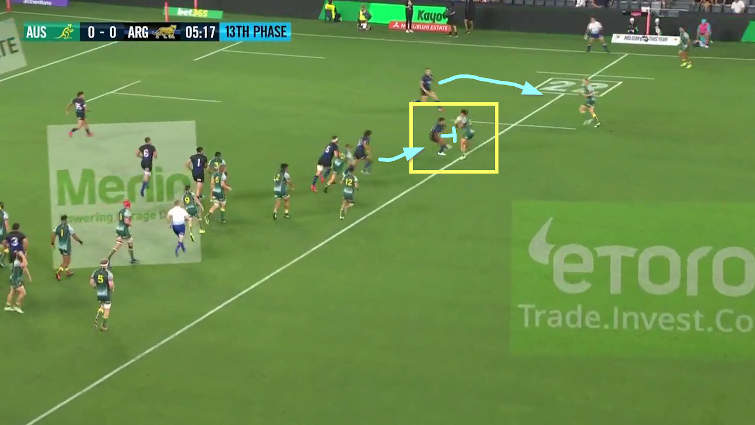 It was the same story from the lineout:

Michael Hooper is thumped by Facundo Isa on first phase, and the contest on the floor by Montoya means more five-second ball for White. Petaia has nowhere to go on the next phase, and is forced to kick the ball tamely away.

Wallaby ball-carriers never came to terms with the Pumas’ strength in the upper body, and that created more opportunities for Montoya (Argentina’s main jackal) on the deck. One picture predictably led to another, as first Allan Alaalatoa then Philip were picked up and carried backwards: 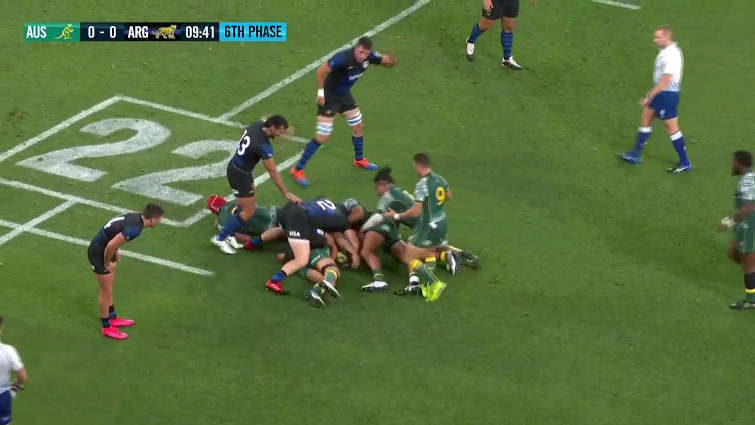 The same combination – Isa tackling and Montoya jackalling – generated a crucial turnover on the Pumas’ goalline:

Other red-zone turnovers were forced by the capacity of the Argentian back five forwards to dominate their opposite numbers in contact without the ball: 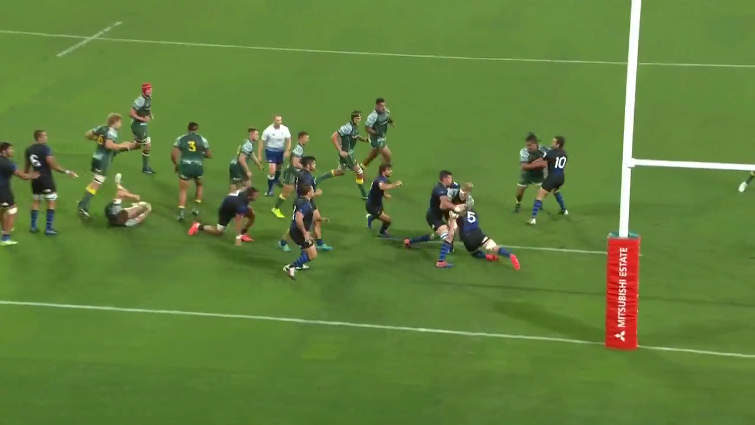 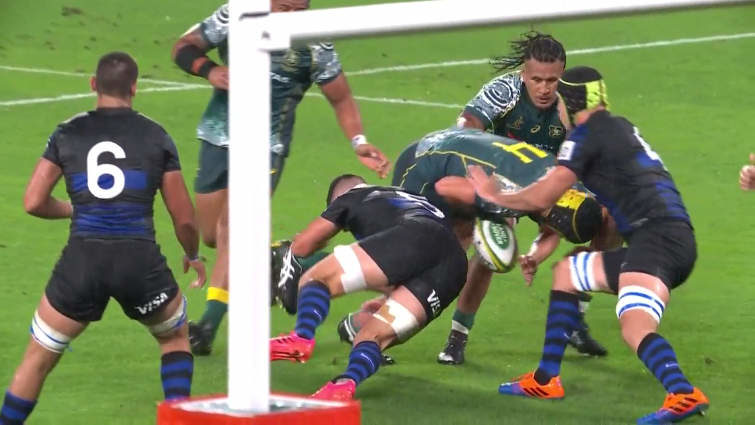 In both instances, Kremer knifes in low from outside while Matias Alemanno stays high and square and targets the ball. The pill is dislodged from the grasp of first Philip then Simmons.

The following short sequence at the beginning of the second period provides a suitable epitaph:

Australian backs are dumped comprehensively by Puma forwards on two successive phases – first Hunter Paisami by Tetaz (with Montoya hovering to pick up the scraps), then Reece Hodge by Isa and Alemanno. That is what winning without the ball is all about.

Summary
Dave Rennie still has considerable food for thought left on his plate at the end of a highly watchable Tri Nations series. He is trying to imprint an attractive, attacking gameplan which will put bums on seats and compete meaningfully for broadcasting money with the other contact sports in Australia.

At the same time, he is swimming against the tide of a game which is shifting towards kicking and defence in one of the perennial cycles which Eddie Jones, for one, and Dave Wessels for two, have flagged up.

Rennie’s Wallabies have been picked primarily for attack, but they have scored four tries in four games while conceding ten to their opponents. Eddie’s England are built for defence and kicking, but have registered ten tries of their own and only two against in their three games so far – albeit against more modest opposition in the Autumn Nations Cup.

The current interpretations at the tackle, and in the play immediately following it, favour the defence heavily. Tacklers know that if they can hold up a ball-carrier at the point of contact, the cleanout loses most, if not all, of its value.

On-ballers know that if they can drop low enough, they can create a target which is hard for the cleanout to hit, at least without making contact with the head or neck of the defender.

At a time when Australian rugby is seeking to re-establish its global footprint, this represents a serious problem. Australian rugby has always enjoyed a positive, ball-in-hand attitude, and it has been successful implementing it.

But what do you do when the rugby gods are blowing your ship in the opposite direction? Will it heave serenely into port, or will it arrive shipwrecked, and in different pieces?