I don't care what you say, Joe Burns can't play

A less than impressive start to the season that even warehouse cricketers wouldn’t be content with. The scary thought still lingers in my head of Joe Burns being thrown into the furnace of a Day Night Test at the Adelaide Oval against a potential Indian bowling attack comprising Jasprit Bumrah, Mohammed Shami and Umesh Yadav.

The Test match return is slipping from the fingers of Burns with one more innings still to play in the current tour match.

But with the Australian potential debutants like Will Pucovski and Cameron Green both suffering concussion, Burns may be able to salvage a return and retain his spot in the Test team purely because of circumstance. But surely, surely he can’t play in the first Test in Adelaide with the blokes in front of him.

A bloke who has flown well under the radar of the Australian media is Marcus Harris who in stark contrast to his fellow opening batsmen in the current tour match against India A has scored an incredible 406 runs in six innings at an average 73.5.

Only two seasons ago Marcus Harris was touted as the next Michael Slater with his slashing drives through point and his whippy bottom hand and masterful flicks of his pad. He looked like a star of the future in what was a gloomy series against the Indians.

Until he was unfortunately shunted out of the Australian Test team during the 2019 Ashes facing the guile of Stuart Broad and James Anderson not least with the whopping Duke ball in barmy English conditions. He has flown well under the radar since with his batting at a standstill during the 2019-20 Sheffield Shield season which was less than impressive.

But with this current form that Marcus Harris has displayed during this season, surely he gets a shot in front of the incumbent Joe Burns.

If you haven’t heard of this bloke before you have been living under a rock, Will Pucovski. The young Victorian batsman has been churning big runs out for his state in Shield cricket and has his head in front of Burns as the candidate to open that batting. 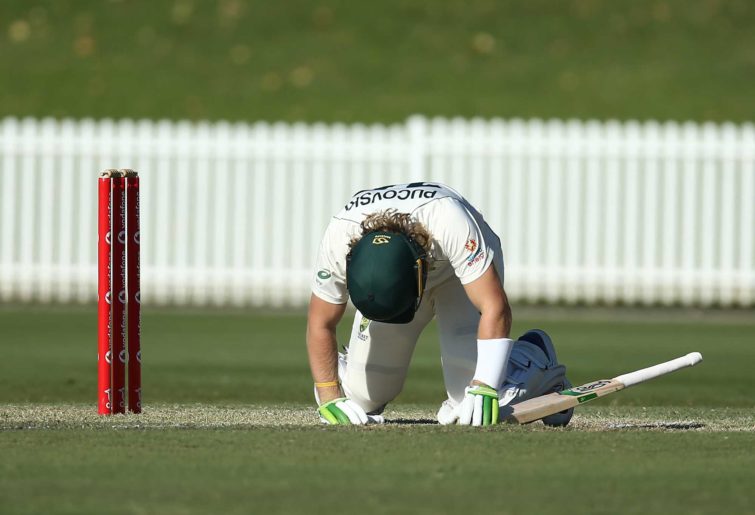 Will Pucovski of Australia A lies injured after been struck in the helmet off the bowling of Kartik Tyagi of India A during day three of the International Tour match between Australia A and India A at Drummoyne Oval on December 08, 2020 in Sydney, Australia. (Photo by Jason McCawley/Getty Images)

But that head that is in front of Burns could be his downfall in debuting for Australia. A bloke who has received nine concussions in his 22 years on earth is almost certainly going to be ruled out.

But surely, surely Joe Burns can’t be put in place of a bloke who has peeled off runs in Shield cricket if fit.

Shaun Marsh. I can’t wait to read the comments on this. Shaun Marsh a bloke who has had a sense of nepotism attached to his position in the Test team purely because of his name hasn’t been able to necessarily crack it in the Test match arena.

Yet Marsh has scored mountains of runs of recent times in domestic cricket dating back to last season where he scored a masterful 101 not out in the Domestic One Day final against Queensland.

But he could be a serious top gap for the Australian Cricket team if Will Pucovski is ruled of the first and could be second Test of the summer.

Marsh should be given a look in for the Test team as his last hurrah.

Joe Burns who has had his travails of recent times nonetheless he has shown he can score Test runs as he averages 38.3 which isn’t too bad. A better Test batting average than Nic Maddinson at least.