Barefoot rugby could save the code from dying

This article has been brewing as I’ve watched rugby union as a game deteriorate to the extent that I rarely watch it, and when I do, I mostly get bored with it.

This is from someone who has it in their blood from three generations, so it’s not easy watching it go down the pipe. And I am genuinely distressed by its ailing, if not its dying.

From my limited angle, I can’t help but think they’ve succeeded in making a simple game of running and passing and tackling into a complicated product, and a boring and sometimes dangerous one at that.

It was a team game for fast and slow, fat and skinny, skilled and… different skills.

Private equity or TV deals won’t fix its elementary problem being that as a game, it’s become boring.

So I thought I’d humbly make a suggestion – a very basic innovation to take the game back to fun for kids under, say, 12 years of age.

With all games now having the chance to reinvent themselves, it could be a great time to go back to the very basics of what rugby is: a running and passing game.

And here’s my idea of how to set that up for the next generation, which ticks many boxes without unnecessary tampering or regulation.

My idea? No footy boots allowed for kids under 12.

These are the outcomes and positives.

It would be harder to kick the ball therefore there are less conversions, less penalties and less kicking in general play. That means more emphasis on running, passing and getting the ball to the guys to score tries.

There would be less ankle and knee soft tissue injuries as most of these are caused by the anchoring action of a boot’s studs versus those opposing forces and actions in the upper body.

There would be less push and pressure in scrums, makes binding, technique, strength of body and hooker strikes much more skilful.

There would be less rucking track marks, and cuts from boots.

There would be more emphasis on beating the man with swerve, sidestep, fade, dummy and pass skills.

There would be less impact on the size of players at that vulnerable young age – and more emphasis on the value of skill.

There would be less chance of mothers being distressed by their boys’ injuries in all the above situations.

Tackling skills would change without the traction of boots and studs.

It would be less expensive for the parents – kids just turn up with a shirt and shorts.

So there would be more emphasis on fun and running and slow blokes passing it out to the fast blokes. 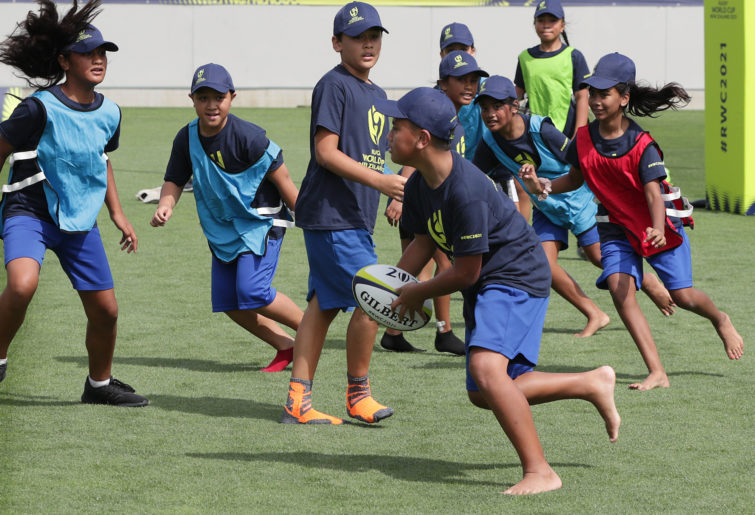 Could barefoot rugby re-inject fun into the code for kids? (Photo by Dave Rowland/Getty Images)

And, I imagine, there’s a load more. Think about it.

My favourite games of rugby as a kid playing on a trip in New Zealand were barefoot games against Maori boys up in the Tongariro.

The rule was if one couldn’t afford boots, then the coaches agreed no-one wore boots and the game went on – usually in the mud.

No-one got hurt – the kick in play dropped out of the game and the scrum pressure dropped away – and it was a game of running and passing and tackling and scoring tries.

Likewise, in my time at school, some of the real stars and the great plays were in the barefoot footy games in the rain on the back fields, where the true skills were honed without boots and too much gear. No kicking – just running, passing, skills and speed. Uncomplicated fun.

So, in essence, take the game back to its very basics. You could run a junior barefoot trial comp as a pilot under-12s competition. See how it goes. What’s to lose?

The game needs to be taken back to basic skills – like the Ellas. From that, the fun will grow, the love of the game will come back to juniors again, the mothers and parents will feel comfortable again and then the growth will follow.

Let’s just run with it. It might be our last chance.