The Eagles made some harsh cuts to their list to bring it under the new salary cap and fit the list size reductions without having much draft capital to address the deficit.

Yet, as they so often seem to be able to do with a poor draft hand, they made hay while the sun shone and got a handful of players at a very modest price.

West Coast got off to a trade flyer with the first deal of the period, sending Pick 54 to GWS in exchange for Claremont junior Zac Langdon.

A week later the Eagles traded Tom Hickey to Sydney with Picks 34 and 60 in exchange for the future second-rounder Sydney got from Port for Aliir Aliir, Sydney’s own future third, plus Picks 58 and 62.

The next day West Coast used Pick 58 and their future third pick to trade with the Lions for Alex Witherden and Pick 86, which concluded their trading. 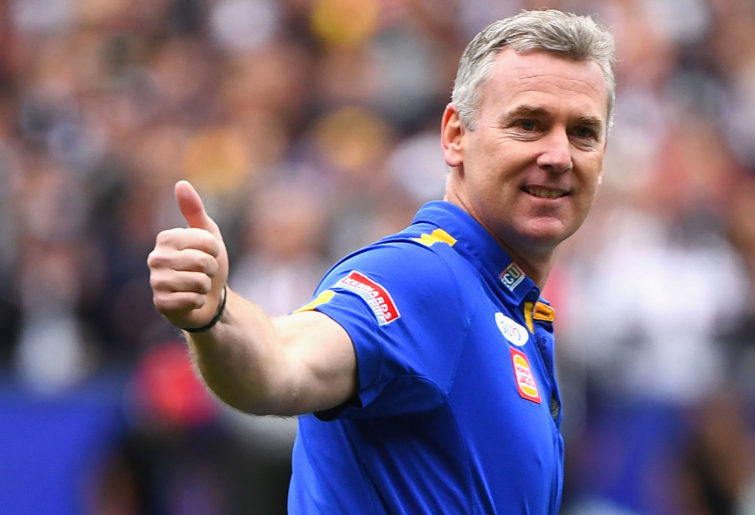 Fortunately for Eagles fans watching the draft, it was still reasonably early in the evening when West Coast came on the clock at the beginning of the fourth round, selecting Luke Edwards, the spurned father-son eligible prospect out of Glenelg.

Ironically the pick originated with Adelaide, coming to the Eagles via the Swans, and it came in a whole ten places after all of the bid-matching of the opening three rounds consumed 20 picks.

But that was nothing compared to West Coast being able to use Pick 86 to claim Isiah Winder at 57, the spare change in the Witherden deal, who came for Peel Thunder.

The following day the Eagles snapped up Zane Trew from Swan districts at 12 in the rookie draft, who may well have been the draft’s biggest slider, having been rated an early second-rounder, but only West Coast believed in him enough to select him.

Langdon fills an immediate need at small forward as the Eagles obviously missed Willie Rioli in 2020, not to mention him returning to his home state and getting a fresh start after two slow seasons following a breakout year in 2018, kicking 21.6 and having 11 goal assists.

Witherden burst onto the scene in the latter part of 2017 and then missed only two games in the following two seasons, but the lasting image of the Lions’ devastating final-quarter loss to GWS was one of him giving up in the chase as Brent Daniels ran in to kick the winner. The 2020 version was supplanted by new recruits, so he really needed the change of scenery.

Edwards had a lot go wrong for him in 2020. His father’s old club got their first wooden spoon and in the end chose not to nominate him for father-son, though the rumours had started months earlier. He’s played senior SANFL footy and has the versatility across the lines for West Coast to use him as needed.

Winder is another whose senior experience and versatility will fast-track his development within the West Coast system. He’s not a pure small forward, playing down back and through the middle, and has speed and evasiveness that stood the test against men in the WAFL.

Trew is a hard-running inside midfielder who has had a couple of injury-disrupted seasons after being named All Australian at under-16s and playing for his country against New Zealand in 2019, but he couldn’t crack senior footy in 2020 to show his best.

The Tim Kelly trade cost the Eagles high picks in the past two drafts, yet they really built their base on the 2017 pick swap with the Suns when they were able to select Oscar Allen, Liam Ryan and Jack Petrucelle for basically nothing even though they actually whiffed on getting Kelly in that draft, which didn’t have live trading.

So while they benefited from the most one-sided draft in history, they failed to capitalise and had to pay out one of the highest trades in history, and yet they have the players to show for it and games in their legs to keep the list competitive once the current veterans retire.

This latest crop of recruits features a pair of experienced players, three out of the five are from Western Australia and all could play senior football in the future.