The single biggest bete noire in the game of rugby as played today is the breakdown.

If you look at the laws governing the tackle and what happens just after it, there are no fewer than 54 clauses and subclauses for the referee to keep in mind.

His or her brain must be working at the speed of light in the assessment of legalities and illegalities during a snapshot of action that lasts for seven seconds or less. They may then be asked to repeat the same complex process of evaluation as many as 250 times in one game.

In July 2020 World Rugby issued new guidelines based on the recommendations of its specialist breakdown working group. They were aimed at reducing the chance of injury which occurs when a defender ‘jackals’ for the ball on the ground with his hands.

The jackalling process drops the defender’s head and neck well below hip height and makes it the first target area cleanout players see upon approach to the tackle area.

The difficulty of avoiding contact with head and neck was amply illustrated in the last game of the 2020 Tri Nations series in which one player from each side was yellow-carded for illegal contact to the head within the first half-hour of the match.

Chief among the laws World Rugby claimed it would reinforce were the following:

During a ruck
11. Once a ruck has formed, no player may handle the ball unless they were able to get their hands on the ball before the ruck formed and stay on their feet.

Another oft-neglected rule in the ruck section of the law book that is just as relevant is 15.3: “Players involved in all stages of the ruck must have their heads and shoulders no lower than their hips.”

The new directives have in practice resolved the breakdown in favour of the defence. At the highest level of the game, a good defensive team will typically force a turnover on the deck within 12 phases.

The elephant in the room is the jackal. As long as a tackler, assist tackler or the first arriving player is permitted to fold over the ball and try to win it with his hands, it will determine everything else which happens in what now apologetically passes for a ruck.

The jackal’s shoulders are always lower than his hips, and that dictates the body height of the cleanout. Immediate release by either ball carrier or tackler is just wishful thinking. More often than not people on both sides go to ground and the ball is trapped in a grappling match in the centre of the ruck.

One of the most influential games in terms of the application of the new refereeing guidelines occurred between Bristol Bears and Wasps in the semi-final of the English Premiership only ten weeks ago.

Under Pat Lam’s stewardship, the Bears have become one of the most adventurous sides in the league. They like to keep ball in hand, they like to use width, and they enjoy running out of their own end.

Against Wasps they kicked the ball 11 times to 26 by Wasps, they made 104 more passes and 58 more runs than their opponents and set 34 more rucks. The stats show more clean breaks, more defenders beaten and more offloads by Bristol. But Wasps won the game 47 points to 24.

Why? Wasps fielded three top-drawer jackals in the starting back five forwards in the shape of Joe Launchbury, Thomas Young and Jack Willis. Willis was the league leader in takeaways with 43, more than twice the number of the next best poacher.

The following are the raw stats of Bristol’s time in possession of the ball.

Bristol managed only two attacking sequences of more than six phases, and both of those ended in kicks. The balance of breakdown penalties was in favour of the defence (six to three), and Wasps turned the ball over via jackal once in every eight phases.

Let’s look at some typical snapshots which demonstrate why the July directives have failed. The referee is Matthew Carley, who is one of the best young officials in Europe:

This is Wasps’ second breakdown turnover of the game. The Bristol ball carrier is isolated as he runs the ball back from a kick, but there are already enough signals at the tackle to give the Wasps’ on-ballers encouragement that they will be in business: 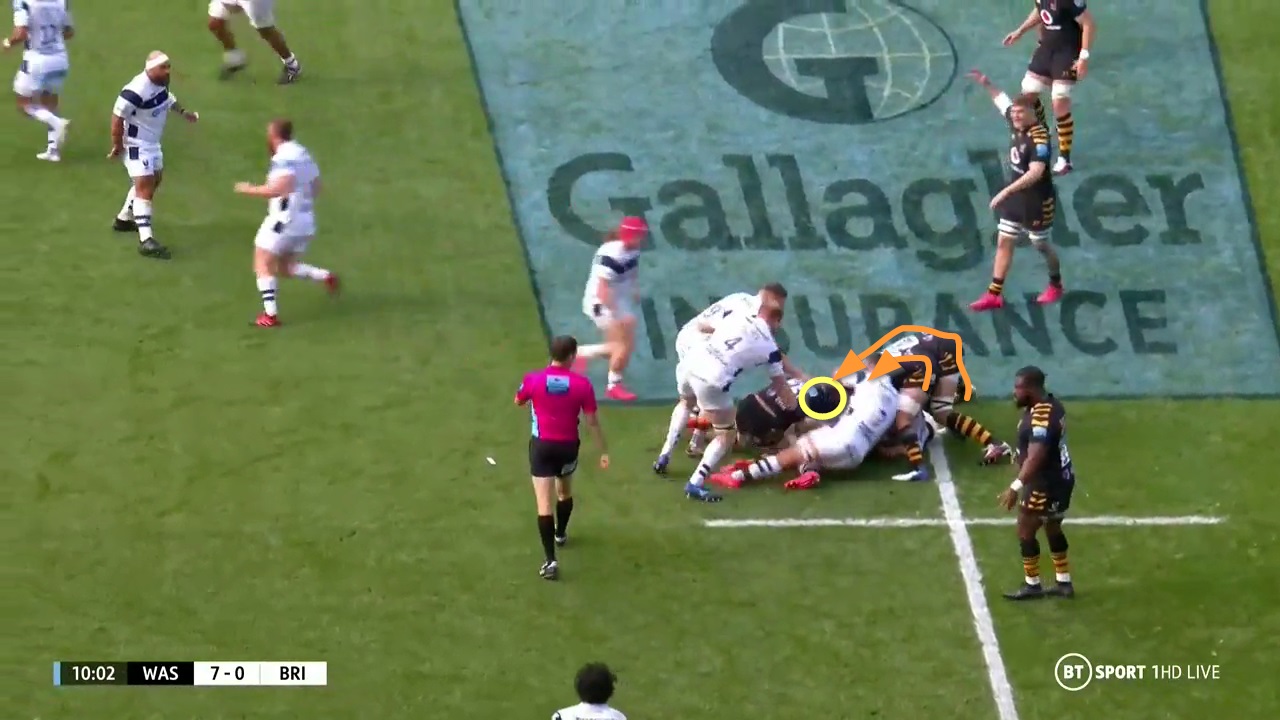 The main issue is that the tackler (Wasps no.23) is never required to move away from the ball. That means the ball carrier cannot place it away from the two Wasps jackals (Launchbury and Young), and the Bears’ cleanout players cannot manoeuvre around him to make an effective impact.

Above all else, it is the body position of those two jackals that dictates the nature of the ‘ruck’ that ensues. They are bent double with shoulders well below hip height, so there is never a realistic prospect of arriving players staying on their feet in order to remove them. The danger of significant head or neck injury remains.

Matthew Carley only warned Wasps about hands in the ruck without penalising them.

Jack Willis goes in on the ball with his hands after the first attacking player has arrived, and that causes a four-second delay that is crucial for the next attacking phase.

In general Wasps defenders were not consistently required to release the ball carrier after a tackle had been made.

In neither instance does the tackler in the first example or the assist tackler in the second example ever release the ball carrier for long enough for a clear placement to be made.

This little acorn at the breakdown grew into a mighty oak for the Bristol attack as the game unfolded.

Wasps fullback Matteo Minozzi never releases the ball carrier during the tackle and he never allows him to definitely place the ball. Moreover, he is presenting his head and shoulders to a suitably enraged Bristol cleanout. 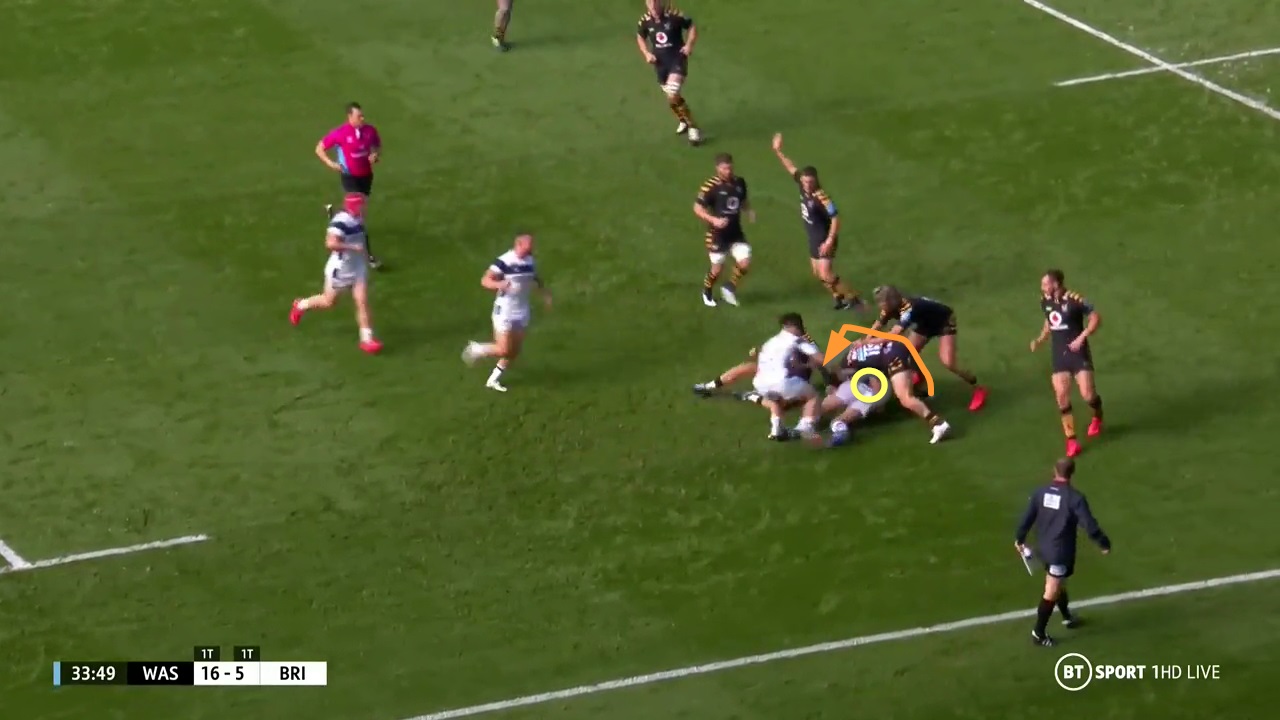 The ball spilled out of the back of the Bristol ruck and Wasps made a score out of their breakaway on the following play.

Something similar happened in the second half.

There is never any clear release of the ball carrier by the tackler (no.8 Brad Shields) who keeps his right hand in contact with the runner throughout. 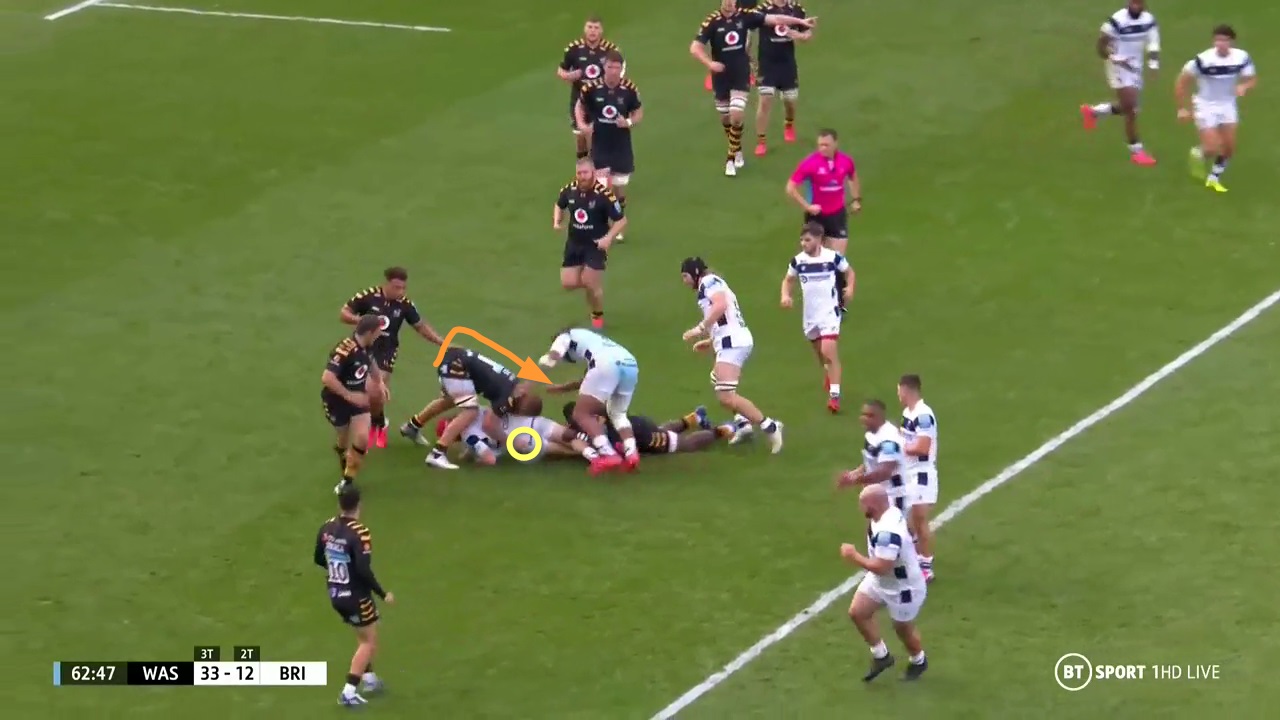 The ball stays high in the ruck for too long and there is another crucial delay in release, which enables Wasps to wrap another forward around the ruck and set comfortably for the rush on the following phase. Their right wing, Zach Kibirige, ran away to score a cheap try after the Bears fumble.

The following short second-half sequence contains a number of elements which the law reinforcements strove to make impossible.

The tackler (Wasps no.5 Will Rowlands) never tries to roll away from the ball but gets up late and drives forward with what looks suspiciously like a trip on the halfback for good measure. That leaves easy pickings for Willis on the next play, with Young blocking the only cleanout path to the ball. 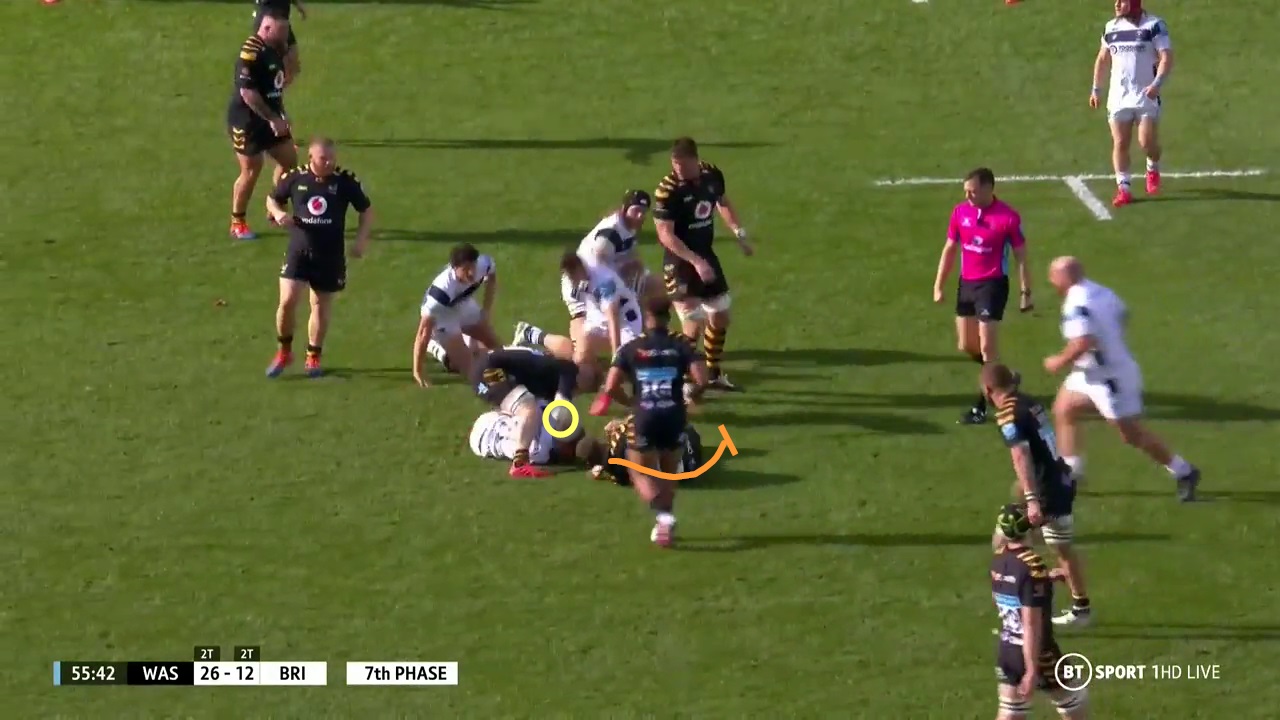 Let’s finish with a positive which brings all the negatives into sharper relief.

It is probably no coincidence that the man placing the ball is Steven Luatua, one of the most accurate presenters of the ball in the league. The placement is long and immediate and the aftermath provides a great snapshot of the direction the game must surely take in 2021. 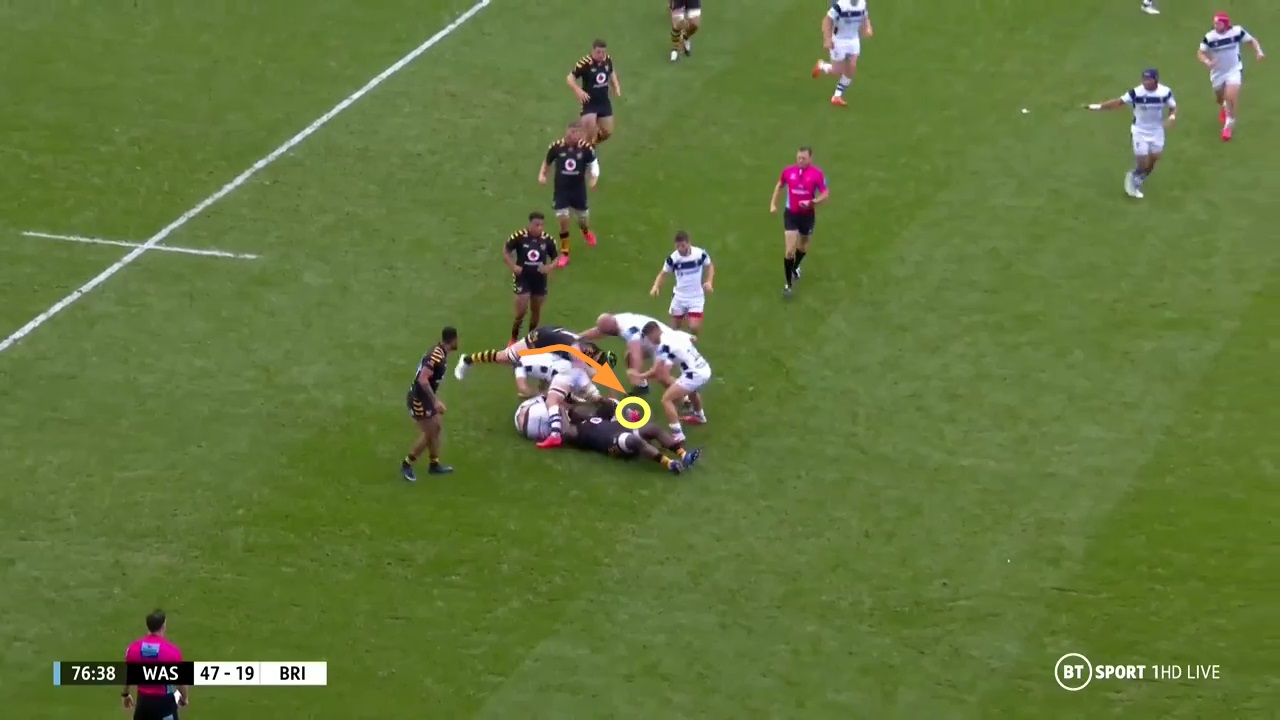 The ball is already so deep in the ruck that the defender has to fall over in order to play it with his hands.

There has to be a new protocol in place in 2021. When the referee is satisfied a tackle has been completed, he should call “tackle”. At that point, all defenders in and around the ball must release and allow the ball-carrier to make an immediate, arm’s length presentation of the ball away from his or her body.

In the subsequent play, they may step across and pick the ball up if they have time, or stand above the ball to create a new offside line if they do not. That action will generate a counter-ruck as the cleanout support arrives.

Summary
In 2020 rugby was on its knees. The double blow of the worldwide COVID-19 crisis and a potential player lawsuit based on the impact of dementia after retirement have driven the sport close to the edge.

Rugby has to get back on its feet both literally and figuratively in 2021. At the heart of the law-making issue is the influence of the jackal at the breakdown. The jackal is the primary player around whom a ruck must currently be constructed, and as a result a modern ruck looks nothing like its forebears. 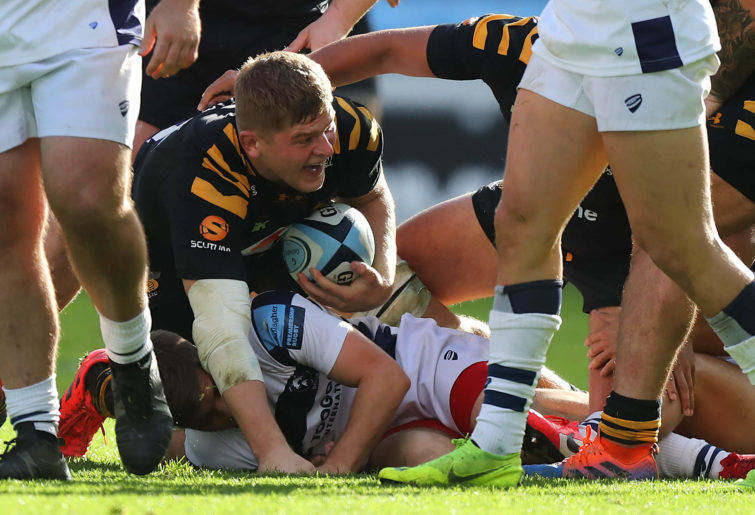 A defender who is using his hands as the ruck forms means that cleanout players will have to dip below hip height in order to be effective at removing him. More often than not they will make contact with his head or neck in order to do so. As ex-Wales skipper Sam Warburton once said, “Sometimes I’ve struggled to shampoo my head, it was hurting so bad”.

Now is the time to bite the bullet and go further than the law reinforcements in mid-2020. Instead of dancing around the jackal it is time to confront him, to get him playing with his feet rather than his hands and his head.

It is no time to bend over but instead to stand up for what is right for the future of the game.