Lots of people argue that he shouldn’t be moved. That’s fine. Moore has emerged as an elite defender. My issue is some of the arguments espoused against throwing Moore forward.

Let’s have a look at those.

Darcy Moore has never really shown anything up forward
I find it unfathomable when people use this as a counter.

Now, while the counter might be that ‘it’s just one game’, I throw this out there to dismiss the claim that Moore’s never shown anything as a forward. There’s an extravagance to that statement that denies all facts, dismisses all evidence and is blindly absolute in its rebuttal.

Now that we’ve poked a hole in it, we can begin to measure Moore from a statistical perspective. 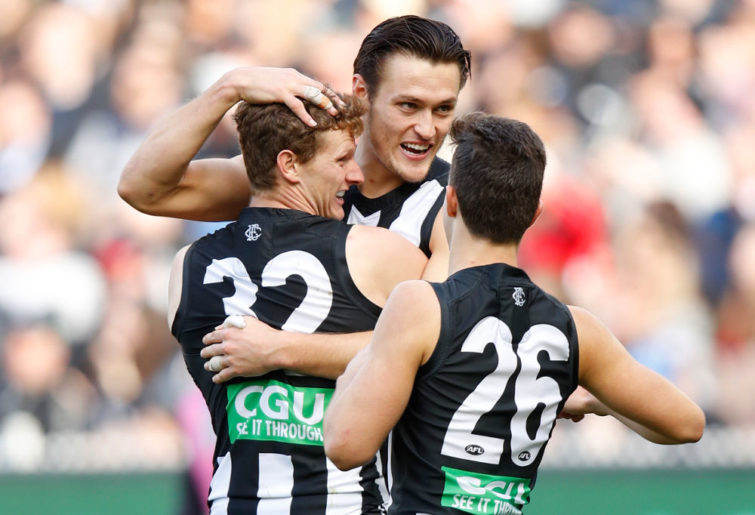 I cite these four as players who had a similar career trajectory to Darcy Moore, getting thrown a lot of responsibility early – as opposed to somebody like Josh Kennedy, who was gradually brought up.

These four players are considered champions of the game. Travis Cloke is arguably recognised as Collingwood’s best centre half-forward since Phil Carman.

How does Moore stack up against these other names?

Well, in his first fullish season he doesn’t amass the number of kicks the others do but kicks as many or more goals. In his second full season the stats have increased considerably and he’s kicked about the same amount of goals.

So what’s the conclusion?

On raw data either those other four forwards showed nothing – or very little – as forwards in their early years (if that’s an argument that can be used against Moore) or Moore sits comfortably with their rate of development.

Collingwood’s forward thrusts
Something else to factor in is that Collingwood finished 12th in 2016 and 13th in 2017. In 2016 they were the 11th-highest scoring team, and they were tenth in 2017. This was not a team who consistently scored freely or who moved the ball fluently into the forward line.

Much of the key-position responsibility as a forward fell on Moore’s shoulders. This was a transitional period for Collingwood. Travis Cloke struggled in 2016 and was at the Bulldogs in 2017. Jesse White played more as a flanker in 2016 and was used sporadically in 2017. Ben Reid was in and out.

It’s important to recognise that context.

In 2020 Collingwood were criticised for the way they moved the ball, particularly when going forward. From 2014-17 Collingwood were equally spasmodic, and injuries often deprived them of their primary and supporting options.

While other key forward prospects might’ve had similar issues to contend with, I cite this simply to normalise expectations.

For those who felt Moore showed nothing or very little, I’m unsure what they expected from a young key-position forward. Fifty goals? Which of his contemporaries have managed that?

Moore was a young, inexperienced, lean, key forward in a struggling team whose delivery was often questionable.

His body won’t stand up to the rigours of playing forward
How do we know this? Because the years Moore played forward he had hamstring woes?

Well, according to this logic, Jamie Elliott’s body isn’t up to playing forward either. Same with Jordan de Goey. Both have had recurring soft tissue problems. Where are the cries that they shouldn’t be playing forward?

And by virtue of that why haven’t we extrapolated that it would be madness to push them into a position (the midfield) that is going to demand more of them physically?

The simple reality is that Moore might’ve suffered recurring soft tissue issues because his body was unaccustomed to the rigours of AFL. These soft tissue problems may have occurred regardless of where he was played.

I would daresay that for as amazing a small forward as Leon Davis was throughout his career, he was positively and consistently elite as a small defender.

Ultimately, players need to play where they’re the best value to the team.

Daicos has been rightfully defined as freakish for his output as a small forward, but prior to 1990 he was an elite midfielder – this is often forgotten or ignored because his performance in 1990 (kicking 97 goals as a half-forward) overshadows everything that came before it.

Brown initially was a winger. He won two EJ Whitten Medals – mixing it with the best in the country – as a winger. But at Collingwood he was often thrown from one end of the ground to the other, often playing as an undersized key position, to plug holes.

So in examining where Moore should play, it should be determined by where he would provide the most value. Now whether that’s forward or back is open to debate. But Collingwood have obvious scoring issues, and a lack of genuine key-position forwards is foremost among them.

Conclusion
The assets that make Moore a tantalising prospect as a defender – his dash, his marking prowess and his willingness to take the game on – exemplify why he would succeed as a forward.

Playing him down back feels like a waste of material – a player who as a forward could be every bit as exciting, damaging and game-breaking as the opposition he’s assigned to negate.

Throughout 2020 we heard commentators salivate over the King brothers. I heard Collingwood supporters lament that we don’t have anybody similar. Well, we do, but he’s in defence.

What we’ve done in playing Moore in defence would be the equivalent of Geelong recruiting Jeremy Cameron to replace Harry Taylor in defence. Or Richmond playing Tom Lynch at fullback. Or one of those King brothers being sent back.

Would they do a good job back there? Probably, because they’re great players. But is the team getting the most out of them back there?

Too many people have drawn the erroneous conclusion that moving Moore down back was a result of his poor showing as a forward.

Well, statistically we’ve proven that assumption’s wrong. He was moved in part due to Collingwood’s lack of options and I suspect because the coaching staff felt playing Moore and Mason Cox in the same forward line would be top-heavy.

If Moore was ever deemed to have struggled as a forward, it had less to do with his talent and his capability to play there and more to do with him being a thin, inexperienced kid asked to hold down the No. 1 key position slot in a struggling team with wayward delivery.

Moore is the sort of talent Collingwood could build an attack around and one who would terrify an opposition. Supporting forwards would also fall down a slot in the queue (behind him) and be likelier to slip under an opposition’s guard.

Collingwood are also asking a lot of Will Kelly to hold down a key-position slot up forward. Kelly has just three quarters under his belt. He looked good against a struggling Hawthorn, but is this the best way to cultivate him? Kelly, like his father, could serve an apprenticeship at centre halfback, where he’d also have the support of Jordan Roughead and Jeremy Howe.

It’s an interesting proposition and one I hope Collingwood explores from an attacking mindset rather than a negative one.

However, regardless of who plays forward, Collingwood need to prioritise how they deliver the ball into their forward 50, because if they continue to move it as they have done in the last two years, then who they have down there won’t matter.