While the entire cricketing world has divided its attention between the India versus England series to decide the team that joins New Zealand for the final of the World Test Championship and South Africa’s first tour of Pakistan in more than a decade, the West Indies and Bangladesh have quietly played out what was arguably the most enthralling series of the three.

The West Indies have surprised even their most ardent supporters by clean-sweeping the Bangladesh Tigers in their own backyard over two closely fought Tests, thereby notching their first away series win in almost a decade.

In the past couple of decades, the West Indies hasn’t been a team that wins away Tests, let alone wins an away Test series. They had won just three of the 29 away Tests since they had won their last away series in 2012.

To make matters worse, more than half the Test team was absent due to COVID-19-related concerns or personal reasons. As a West Indies fan, I was worried if this series would scar some of the young players. Not to mention that a full-strength West Indies side under Kraigg Brathwaite had lost both the Tests in their previous tour of Bangladesh within three days.

Bangladesh, on the other hand, was revitalised by the return of their talismanic all-rounder, Shakib Al Hasan. A proper David versus Goliath story, if there ever was one. In Test cricket, David needs to be better on more than one day if he is to beat Goliath.

In the first Test, Bangladesh won the toss, elected to bat, and scored over 400 – a recipe for not losing a match. But the West Indies did not implode as they’ve so often done and while the middle order was guilty of throwing away good starts, there was an intent to occupy the crease.

Bangladesh had a lead of 171 runs but found themselves in a spot of bother at 3-47 at the end of Day 3. They declared on Day 4, setting the West Indies an improbable 395 to win in just over four sessions.

For a mere spectator like me, the runs were irrelevant. It was all about survival because chasing down 400 in Asia was possible only if you’re the home team. The West Indies had stumbled to 3-59 when it was bedtime for me, and I remember thinking that these two need to play out the day if there’s to be any chance of survival. Apparently, Kyle Mayers had other ideas. 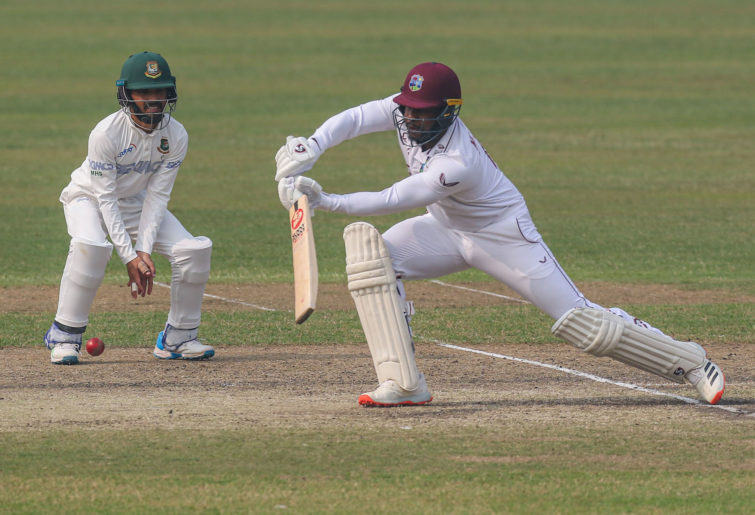 Anyone who watched the West Indies on that fifth and final day cannot forget the composure with which Nkrumah Bonner batted. He has a bit of Marlon Samuels in his demeanour at the crease and he has one thing that Samuels lacked: good footwork against spinners.

While Mayers was picking his balls to punish, Bonner was calmly occupying one end. A wicketless first session was the ideal scenario to ensure that the match was salvaged. Even then, victory was hardly in sight with almost 200 runs needed off two sessions. Mayers brought up his hundred post-lunch: a debut hundred in an away match in the fourth innings. The calmness with which the pair batted was a treat for fans who have been burnt by a lot of batsmen playing rash shots losing their wickets over the years.

Bonner was trapped right in front shortly after tea trying to play around a straight one and Jermaine Blackwood followed soon after, trying to dismiss the ball and losing his stumps in the process. Mayers seemed to be playing on an alternate pitch though and Joshua Da Silva ably supported him as the match came down to the final hour with 68 runs needed off 16 overs.

The equation for Mayers was one boundary an over as he scored either a four or a six off each of the next five overs as the West Indies made 40 runs. Being the pessimist I was, every time the ball went in the air, I watched it with my mouth agape, thinking ‘this is it’.

But each of his shots was perfectly timed and none of the seven sixes he hit was close to anyone within the confines of the boundary rope. He fittingly got the winning runs in what was the biggest chase in Tests in Asia. His innings would be remembered for a long time as one of the most clinical knocks in a chase.

The second Test was just a footnote. As a supporter, you enter an unwritten, one-sided contract with your team, where you set an expectation from them that is not even conveyed to them. And this team had surpassed them all with their heart and performance in the first Test.

But the West Indies were in a mood to over-deliver as they bossed most of the first three days to end up with a lead of 113. Anything above 250 could have been a winning total on that pitch and Bonner again batted with the kind of temperament not seen in the middle order since the days of Shivnarine Chanderpaul. The Bangladesh bowlers came into their own though, with the last four wickets falling for 13 runs and the West Indies set a target of 231.

Tamim seemed to be in a hurry as Bangladesh got to 50 off just over ten overs. Brathwaite, who was pro-active in both batting and captaincy in the series, took matters into his own hands as he dismissed both the openers with his gentle off-spinners in his first spell.

Rahkeem Cornwall started to trouble the batsmen along with Jomel Warrican as wickets fell at regular intervals and Bangladesh were 8-163. 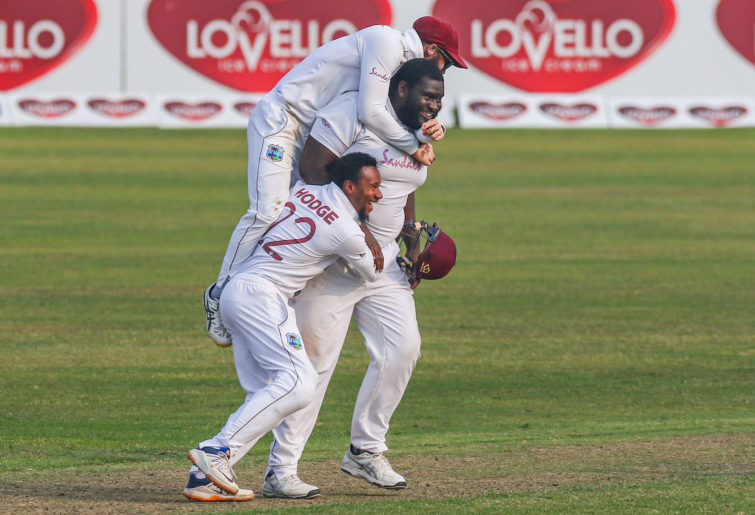 Soon they were 8-179 as Mehidy Hasan and Nayeem Hasan milked the spinners. Once again Brathwaite pulled a rabbit out of his hat by trapping Nayeem in front in what was supposed to be the last over of the day.

Another half an hour was granted to get a result and you could see both Cornwall and Warrican starting to get tired. Ian Bishop repeated several times that Cornwall is used to bowling long spells, in what seemed to be a reassurance to himself as much as the viewers.

But Cornwall had bowled almost 30 overs unchanged. Surely that was too much even for him?

Mehidy cashed in on some tired bowling to play the innings of a lifetime as he started to target a couple of deliveries an over for a boundary when a ball from Warrican turned away and bounced slightly more than Mehidy expected to take his outside edge.

Cornwall crouched low and tumbled at first slip to take an excellent catch. For a man whose physique is often the only attribute that is discussed, Cornwall bowled over 60 overs in the match and took nine wickets along with three catches in the second innings. How’s that for match fitness?

Following any team over the years is an involved process and following the West Indies cricket team takes a lot of patience and perseverance.

Performances like these remind you of the reason you spend all those hours watching your team play. Many of my friends have asked me both literally and figuratively, is it really worth losing sleep over?

You tell me, isn’t a few hours of sleep worth this kind of bliss?