Head smashed 223 before the winless Redbacks finally declared at 8-510 on Friday.

Bancroft has not been seen at Test level since the 2019 Ashes series, but has now racked up 354 runs this Shield season at an average of 59.

His patient knock on Friday featured 11 fours and one six, helping guide WA to a solid position following the early losses of Sam Whiteman (three) and Shaun Marsh (24).

Rising star Cameron Green (45 not out off 110 balls) has the chance to post a big score of his own when play resumes on Saturday.

Bancroft was dropped on 14, and he made the most of the reprieve to post a fighting century.

“In cricket you win some, you lose some. It was one of those things that happened, and I was lucky to make the most of it,” Bancroft said.

The 28-year-old struggled for opportunities during the recently-completed BBL season, and he was glad to be back playing again.

“Getting out in the middle and playing cricket is always enjoyable,” Bancroft said.

“I had some challenging moments, but it’s all in the past now. I’m just really looking forward to playing this game.

“I had a lot of fun out there today. It was nice to get the baggy black on.

“It’s not every day you get a chance to get a century for WA, so it’s something I’m proud of.”

Head, playing in his first red-ball match since being dropped from the Test side last month, was all class in a knock that included 31 fours and one six. 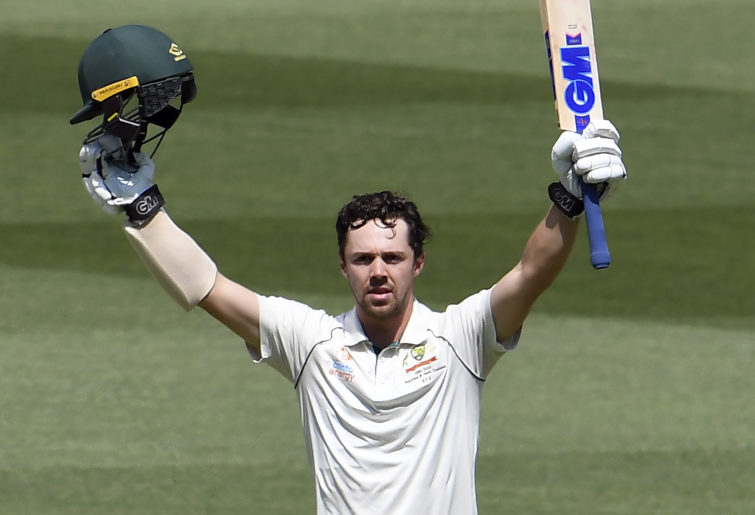 Could Travis Head force his way back into Test calculations? (William West/AFP/Getty Images)

The left-hander went at close to a run a ball in his 245-ball knock, after going to stumps unbeaten on 189 on Thursday in front of Test coach Justin Langer.

He brought up his 200 early on Friday morning, sending Liam Guthrie (1-96) to the gully boundary for back-to-back fours before raising his arms aloft.

The 27-year-old eventually fell when he edged Cameron Gannon (3-119) to first slip, but by then he had well and truly made his point.

The Redbacks captain is now the Shield’s leading run-scorer this summer with 678 runs at 84.75, having made two other scores above 150 before the Test series.

Head was a fixture of Australia’s Test team at the start of the summer, but fell out of favour when he failed to pass 40 in three innings against India.

He would have had another chance to impress in South Africa when picked in the touring squad ahead of Matt Wade, but that Test tour was cancelled.