Samson had more power than he knew – at least until he stooped to pick up the jawbone of an ass, and cut swathes in the ranks of the Philistine soldiers around him.

It is the same in rugby: you soon learn of the players who do not know the meaning of the words “no contact” or “half speed” in training.

They do not intentionally go out to hurt those around them, but nonetheless the attrition rate among those who come into contact with them is unusually high. Like the Philistines in the biblical story, other players start to give ‘Samson’ a wide berth.

It often takes time to learn how to deploy that kind of power constructively on a professional rugby field. Australia has been searching for a new version of the enforcer since the days of Owen Finegan and Rocky Elsom, and two of the main candidates for the role went head-to-head at GIO Stadium last Saturday in the match between the Waratahs and Brumbies.

Rob Valetini and Lachie Swinton have known each other ever since their days in the Australian under-20s set-up. As Swinton commented on the eve of the same fixture in 2020,

“I played with a few of them in the under-20s,” Swinton said before the same fixture last year.

“I know what he plays like. He’s a big physical person as well, so I’m really excited to see him out on the field.

Swinton’s single start for the Wallabies is more than Valetini has managed, but with the latter having four Test caps to his name from the bench, it is all to play for in 2021. Both are likely to develop more as defensive forces rather than as attackers at number six in an international setting. 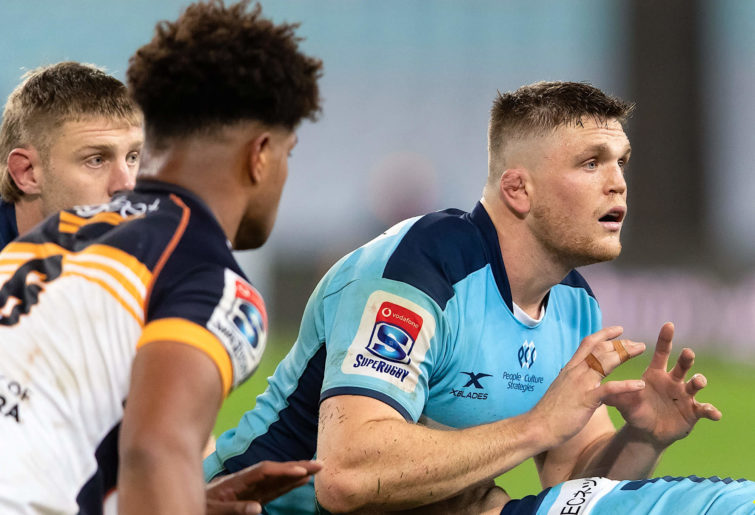 For Swinton, that means managing his desire to play on the edge, and tiptoeing down the line of what is legal without stepping over it. It is not something ex-Wallaby blindside Matt Cockbain ever wants Swinton to lose.

“A guy like Lachie Swinton’s a perfect example, you don’t want to take that edge away from him because that’s him and I like the fact that he has that, I guess that red mist, get angry and then smack guys and really make an impact there,” Cockbain said.

Swinton has said previously that he relies on the more experienced players (like Michael Hooper and Rob Simmons) to redraw that line in the sand at any time it was in danger of being lost.

“Finding that line, it can be hard. But I think it is pretty clear with where the line is if you get carded,” he said last year.

“I just listen to the older players. Hoops is pretty good at being my second brain sometimes.

“I tend to look to him in those situations and he gives me a look and just tells me to calm down and once I hear those trigger words or him pulling me back in line, ‘I’m like, fair enough, he obviously knows what he’s talking about’.

“Listening to them and then just trying to pull yourself back in line when you can feel yourself just boiling over a bit.

On Saturday evening, there were simply too many Waratahs in different versions of the same boat as Swinton – lacking the veteran guidance of a “second brain” and not knowing which way to turn.

By way of contrast, Valetini finds himself surrounded by experience on all sides. Where Swinton was probably surprised to find himself one of the senior figures in the New South Wales pack, Valetini looked around to see Pete Samu, Cadeyrn Neville, Allan Alaalatoa and James Slipper staring straight back at him.

It makes a huge difference, and is probably why Rob Valetini is already developing quicker than his rival in 2021. Looking into my crystal ball at Test level, I foresee that his primary point of difference will not be ball-carrying, but work in contact and particularly on defence:

These two examples, from the game against the Force in Round 1, illustrate how Valetini is learning how to deploy his power on defence under the all-seeing-eye of the foremost contact expert in Australia, ‘Lord’ Laurie Fisher.

In both instances, Valetini not only stops the ball-carrier, he sends him back the way he came. In the first example, he forces him back behind the two main support players, which demands the addition of a fourth (the Force number 3) to save the situation.

In the second, his power compels a more straightforward loss of control of the ball in possession. In both cases, the attack is effectively back to square one.

Valetini has a special role at defensive lineouts. He is required to wrap around he first ‘set’ in midfield and become the key third defender on second phase – key because that position often represents the joint between the last forward and the first back: 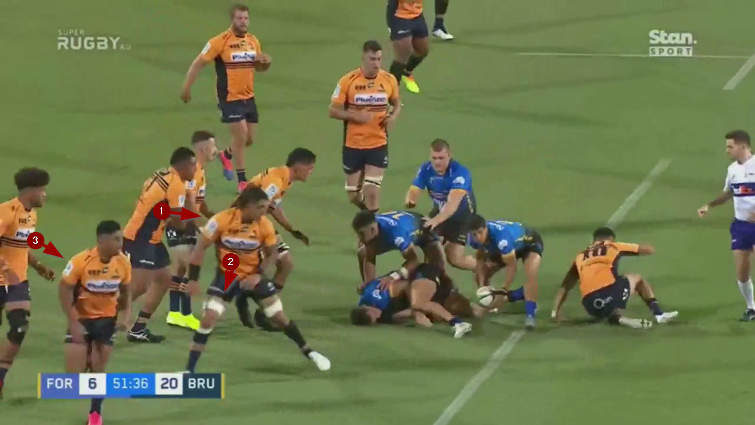 First phase is won easily enough by the Force, but when their best forward ball-carrier, Fergus Lee-Warner, comes around the corner on the following phase, he finds Valetini waiting for him, and all momentum comes to an abrupt stop.

Valetini played this destructive role to the hilt throughout the match: 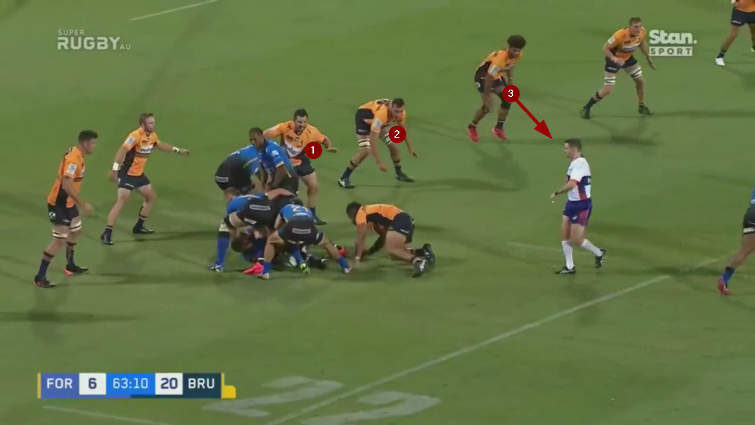 Valetini not only makes the stop from third defender, he bullies the ball-carrier backwards, then gets up and flattens the first cleanout player, opening up a pathway onto the Force scrumhalf.

This exceptionally quick reload by the tackler is an outstanding feature of Fisher’s breakdown defence:

Again that is Lee-Warner being man-handled, again the first support player is taken out for good measure, and again the number nine exposed at the base.

By the end of the game, it was clear the Force were already giving Valetini a wide berth, and had run out of ways to handle him in contact:

It was no better for Swinton in Canberra on Saturday evening. Whenever he came around the corner as a second wave ball-carrier, he found Valetini waiting to stop him in his tracks:

There is a bit of afters following the second stop, and Valetini is the man left smiling at the end of it all.

Swinton’s presentation technique began to break down as he was stopped time and again:

In both instances, Swinton cannot take the tackle on his own terms or place the ball far enough from his body for the attack to continue smoothly. The second example is a particularly awkward version of the ‘squeeze-ball’ technique (delivering the ball to the scrumhalf between the legs) which has become ineffective under the current breakdown rulings: 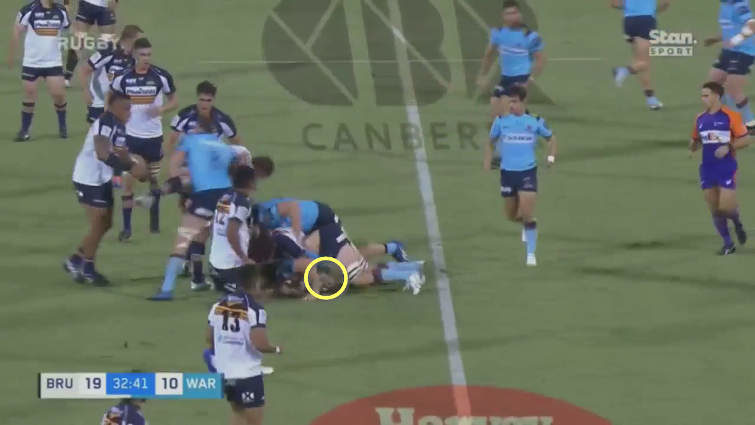 The ball was turned over on the next phase as the Waratahs lost their timing on attack. Another small fracas between Swinton and Valetini broke out, once more Swinton had the worst of it and the Brumbies man had the last laugh. It was a seminal moment:

Summary
The essence of Samson’s strength lay in his hair, and Rob Valetini does not need to wear any brightly-coloured head-gear to stand out on a rugby field – his coiffure makes him instantly identifiable anywhere on the pitch. 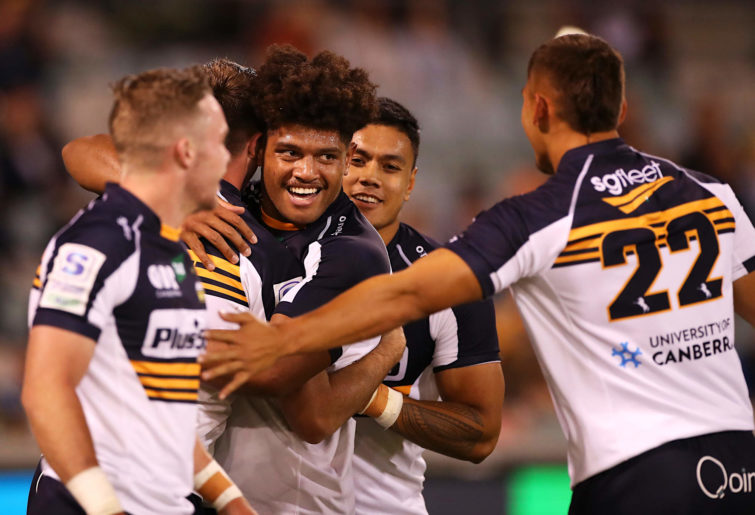 The good news for Australian supporters is that is finally starting to realise his own strength and apply his power with considerable effect, especially on the defensive side of the ball. He is a natural stopper and destroyer in contact, and Laurie Fisher’s coaching is bringing the best out of him.

By way of contrast, it looks as if it may be a difficult season for Lachie Swinton. The likes of Rob Simmons, Michael Hooper, Sekope Kepu, Tatafu Polota-Nau, Tom Robertson, Tolu Latu and Ned Hanigan have all left over the past couple of seasons, and they have not been replaced by men of like stature.

Suddenly Swinton has been cast in the role of senior pro at a time when he was still reliant on a second or third brain to guide him around the paddock. Although it was only his first game back, he looked lost against the Brumbies at GIO Stadium. He was not a factor in key areas like maul defence, and he came out second best in the enforcer war with Valetini.

It was the Brumby blindside who was doing all of the laughing, and with the quality of his support system on and off the field in Canberra, he may well laugh all the way to a Wallaby starting role later in 2021.

Dave Rennie has made it clear he wants a big, powerful force at number 6, and right now there is nobody wielding the jawbone better in Super Rugby AU than Rob Valetini.