Why Test match rugby is losing its appeal

Repeated officiating gaffes are killing Test rugby for the purist.

Rugby union used to be a game where teams would win because of their greater attacking flair and coordination. Their sharper, smarter tactics. Their heroic defence. Or sometimes because of the opposition’s mistakes.

Now, too often Test matches are determined by officiating howlers. As a result, you don’t always get the ‘right’ result, and that threatens to undermine its appeal.

As the last rites were completed for the 2021 Six Nations, pundits reflected on a compelling tournament that brought rugby back to life after the turgid Autumn Nations Cup. Although there was some fantastic rugby played, much of the excitement resulted from the unpredictable nature of the results: Scotland beat England who beat France who beat Wales who beat Ireland.

A fair amount of that unpredictability resulted from the lack of consistency in the officiating. The TMO was at times correctly used to clarify situations (Luke Pearce did this particularly well in the France versus Wales game), and yet there were many occasions where it was not even requested, including for Scotland’s questionable opening try in the final game against France.

In addition, there were other occasions where you felt the TMO should have been allowed to offer guidance to a referee to review key moments. The lack of consistency was illustrated by the stark contrast in two decisions during the tournament.

Finn Russell saw red for his forearm fend on Brice Dulin in the 70th minute of the France versus Scotland final act, while Liam Williams somehow escaped any punishment for his raised elbow into James Lang’s neck and face in the 36th minute of the Scotland versus Wales encounter: 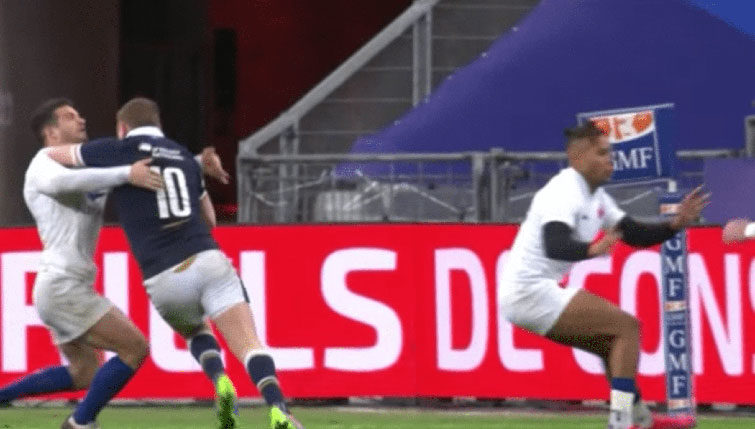 Somehow, Williams’ leading elbow went unnoticed. So much for the player safety that was the key consideration relating to Zander Fagerson’s red card in the 53rd minute of the same game.

Unfortunately, there are plenty of other recent examples of baffling decisions to refer to. In the 16th minute of Wales’s Six Nations clash with England, Owen Farrell was penalised for not rolling away, and referee Pascal Gauzere lectured the England captain about too many infringements before instructing him to talk to his team.

Farrell duly gathered his team behind the posts, and as he was talking to them, the referee called “time on” and Dan Biggar kicked cross-field for Josh Adams to catch and score. Farrell remonstrated with Gauzere, but the referee told him time was on and that his team not being ready wasn’t the referee’s problem!

There were just 22 seconds between Gauzere walking away from Farrell and the official blowing the whistle to signal the resumption of play which led to Wales’ try.

He wasn’t much happier when another horrible decision 14 minutes later gifted Wales a second try.

Some might point out that Wales would have won even without the 14 points they were gifted. However, the whole momentum of the game would have been altered without those two tries, and it would have been Wales who were chasing the game from 14-3 down at halftime and 24-10 down after 63 minutes. The match’s complexion would have been entirely different, creating confidence and pressure in very different ways.

Prior to Christmas, England lifted the Autumn Nations Cup after officiating errors deprived France of a deserved victory over their cross-channel rivals, a point reinforced by Stuart Barnes in the Times on February 8.

Wales again benefited from a series of inexplicable non-decisions at key moments of their Six Nations match against Scotland, when the correct decisions would have seen the Scots as winners, and the Triple Crown (and probably the Championship) would not have been secured by Wales.

Most baffling was a series of offsides that went unpunished as Scotland battered the Welsh line around the 48th minute after the referee had already just awarded a penalty to Scotland for the same offence. The definition of offside at a ruck reads that the “offside line runs through the hindmost point of the hindmost player of either team”. This should be very clear, yet too often it is not enforced.

At least three Wales players were offside (not five metres back) at the tap penalty – their feet and hands were clearly not behind the line.

A series of Welsh players were offside as the Scottish player picks at the base, and players were still offisde right in front of the referee as the ball was picked up on the next phase: 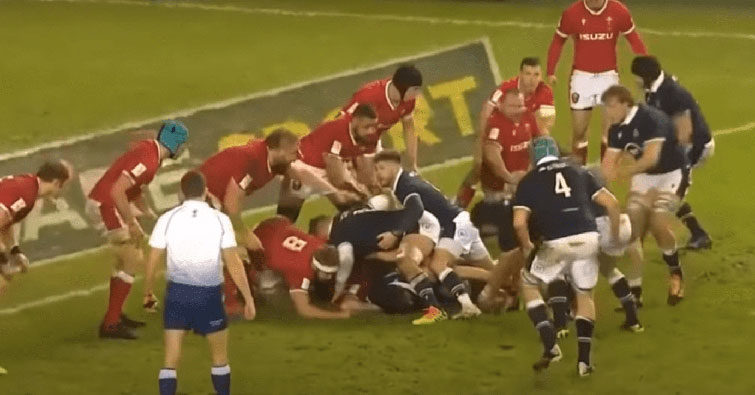 This trend continued for the phases which followed, too.

Even the final play of the game was unsatisfactory, with Stuart Hogg tackled off the ball by Liam Williams, and Chris Harris clearly being prevented fair access to the ball on the ground by Louis Rees-Zammit holding on.

When Hogg was tackled off the ball, he never actually touched it, and the referee could be heard saying “ball tapped back by red”.

The final play again: Chris Harris is on his feet over the ball for some time, and denied access to the ball by Rees-Zammit holding on. Hogg would also have been in position to go for the ball had he not been infringed.

Some of the laws of rugby have always been open to interpretation, and players, coaching staff, officials and spectators will often see things slightly differently.

In addition, we all accept there will be mistakes, but when they come thick and fast and alter the result of matches, we have the right to ask questions. Unfortunately, it means Test match rugby is no longer the must-see TV spectacle it used to be.

Cricket doesn’t get everything right – there were some dubious decisions in the recent Test series between India and England – but it does produce the right result: even the most one-eyed of Englishmen can have had no complaints about India lifting the Pataudi Trophy.

If four pairs of eyes aren’t enough to ensure the right result in rugby, perhaps the professional/international game needs to add extra officials with specific roles to ensure the laws are applied correctly – one official looking solely at offside, for instance.

I am not a huge follower or fan of NFL, but seven officials are deemed necessary to effectively manage that more discrete, stop-start game with only 22 players on the field.

Off the field, rugby is faring little better in terms of consistency in its decisions. Peter O’Mahony received a three-week ban for his illegal cleanout of Tom Francis in Ireland’s game against Wales, while Zander Fagerson received a four-week suspension for the same offence.

“Presumably the difference resulted from the relative disciplinary records of the two players”, I hear you say. Well actually, Fagerson has the better rap sheet.

Rugby has some key issues to resolve before it starts to lose its TV followers and supporters, along with the purists. I, for one, am falling out of love with a game that too often no longer ends in the right result.