Lessons for Australian sport from the Super League debacle

The much-maligned Super League has been and gone, but not without putting football fans through emotional purgatory. I’m not being hyperbolic when I say that news of Tottenham’s breakaway intentions felt like I had been cheated on.

After a week of introspection, I have just about composed myself enough to pen down my thoughts without recourse to asterisked vernacular, and also in a fashion relevant to the Australian sports supporter.

My focus is on rugby league, but the message is equally applicable across all of Australian sport.

More than anything, the ultimate lesson should be to avoid the prioritisation of money over all other concerns. The diminution of everything to whoever flashes the largest chequebook: loyalty, tribalism, passion, locality, comradery – they all go out the window when the dollar signs light up.

We’ve seen it with talks of relocation, clubs prioritising corporate box sales over regular punters, TV broadcasters moving games to inconvenient times for their own benefit over the match going fan. (Friday 6pm anyone? Or how about State of Origin on Sunday evening?)

Most clubs, sports and leagues are not in a position to scoff at money, but neither are they impoverished. The crux of the matter ultimately comes down to a balancing act between the values we wish to hold on to, and real-world financial pressures.

For a hypothetical example: I’d have no qualms with a new NRL team in Perth. Why should clubs be allowed to scupper the development of the game out of their own self-interest (where it is not jeopardising their existence)? Even if it’s to the detriment in the short-term, one can see enough benefits to give it a go.

But to talk of relocating an existing NRL club across the country? The fact that such a scenario is still entertained speaks volumes.

Clubs should not be the playthings of rich owners, nor strategic pawns of organisation to be brandied about willy-nilly. But as it stands, there exists no mechanism for fans to make a meaningful contribution or have a decisive say over any such action.

Fatalistic thoughts of supporter inability to mobilise change should be eliminated. Sizeable protests by English fans brought home the sheer hatred of the concept to the out-of-touch billionaires, and let’s not forget the tens of thousands of embittered Rabbitohs fans marching on Town Hall for reinstatement to the NRL.

Even the original European Super (rugby) League in the 1990s had to abandon plans for club mergers after pitch invasions and protests.

What can be done to prevent any future scheming? I am not convinced that a German-style 50+1 membership, fan-owned model would work. For starters, that type of fan culture is not ingrained in Australia. I have doubts that sufficient capital could be raised to finance such an initiative, and as a Bunnies fan introduced in part by the work of Russell Crowe, it is worth remembering that not all club owners are evil, bloodsucking parasites. 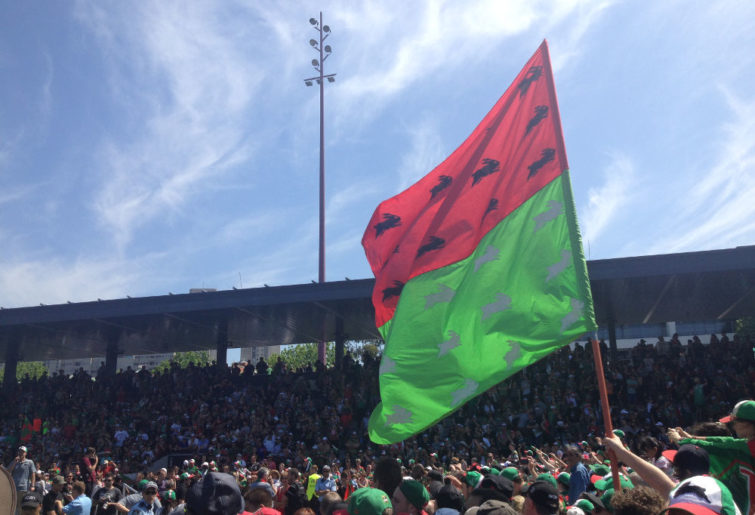 The best answer possibly lies in moving towards democratic accountability over decision making. Clubs should be forced to consult their membership over big issues. These could include the choice of home stadium, potential relocation, a change in name or colours, whether the club should accept drastic new competition rules, or indeed competing in a new competition. Members should be able to veto any decisions.

It is absolutely fantastic that Souths fans have been canvassed for their choice of stadium. But it is only through the grace of the owners and executives that such a choice is guaranteed. Nor is there any guarantee that a majority decision would be acted upon.

There are currently no guarantees that other clubs would do likewise or think twice before jumping to dramatic decisions.

I am not writing out of moral puritanism; as Wellington Phoenix are my go-to A-League side, I am exposed to accusations of hypocrisy on the subject of transnational competitions. The irony of me being a foreign writer, talking about Australian fan culture, is not lost on me.

If there is any sentimental value at all, some modicum of emotion that goes beyond the mere cold-hearted, transactional business of money making in sport, then at least some of my words should resonate.