But not all hope is lost. In recent weeks we’ve seen some fight from the Shinboners, and their fans are beginning to look at the signs that point to them winning their first game of the season very soon.

Round 7 saw the Roos fall short of the Demons by five goals. Yes, we can analyse the final score and say that they weren’t that close. However, nine minutes into the final term, Ben Cunnington was able to slot a goal that would draw the margin back to just seven points with plenty of time to play and with momentum flooding the way of North Melbourne.

The Kangaroos led by 19 points at halftime and looked well and truly in control of the contest against a great side that was 6-0 going into the game. Unfortunately they fell off, as they’ve done in numerous games so far, including their clash against the Crows at Marvel Stadium a few weeks earlier. This was their chance to finally get that win on the board and break the drought against a Crows side that was actually in from at the time. 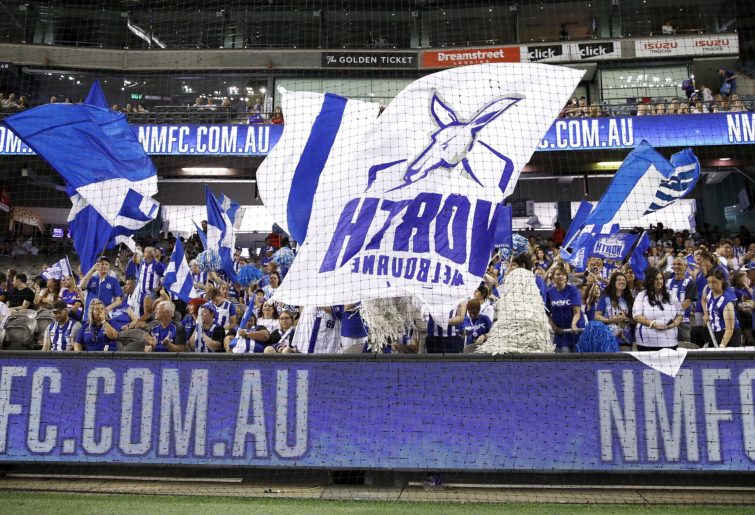 It was a similar story in Round 8 for the Roos, falling short of a troubled Collingwood side by an even three goals. Collingwood looked as if they would kick away through some dominance from Jordan de Goey, and the Pies were able to extend the margin to 30 points at halftime after four unanswered goals.

But David Noble’s Roos weren’t done yet, and they came out after halftime and flipped the game on its head, kicking four unanswered goals of their own. It was a hard-fought game from there, and the Pies were able to edge North Melbourne purely by being that slight bit classier in terms of ball movement and efficiency.

In stats like marking and tackling, North Melbourne are able to compete with most of the other sides in the competition, ranking seventh and ninth respectively – although you would assume with their lack of disposals and possessions they would then be forced to tackle more.

They are ranked 17th in inside 50s and 18th in clearances, demonstrating that it all starts with their midfield. Being ranked equal last in contested marks and second last in marks inside 50 shows how easily they are being outmarked or spoilt. The loss of Ben Brown to the Dees is obviously huge in these facets of the game.

With all of these poor rankings, North Melbourne have still managed to be in half their games this season before running out of juice. It does, however, pose the question as to what they do to improve in these aspects of the contest.

Ben Cunnington has been among North’s best this year up to this point despite playing only six games. But he hasn’t had the impact the Roos would have hoped for in the midfield with Jack Ziebell dropping back to the halfback line. Cunnington has had to stand up, and he leads the side in clearances, is ranked second for tackles and is also averaging more than 25 disposals per game.

That said, he hasn’t had much help. Luke Davies-Uniacke hasn’t hit even close to the form that he was expected to reach this season. Davies-Uniacke, like Cunnington, has played only six games but is ranked 100th in tackles and 111th in clearances and has averaged only 18 disposals. He’s kicked only one goal, which seems to be a common issue among the North mids, as they are unable to hit the scoreboard.

On the bright side, Tom Powell has been very impressive in his first year for North. Charlie Lazzaro and Will Phillips have also shown very positive signs in the games they’ve played. The opportunity for youth in the side is fantastic, and it’s great to see young first and second-year players getting to play plenty of football.

Nick Larkey is a massive asset to North Melbourne, and now it’s up to him to lead that forward line that was steered by Ben Brown for so long. He scored 26 goals in 2019, growing into a player North Melbourne needed behind Ben Brown as the second tall forward. After playing just ten games last year, Larkey has played every game so far this season and has kicked ten majors. He will be hoping to improve on his 2019 campaign as he continues to work on his craft and become one of the better key forwards of the competition.

The North Melbourne injury list is one of the more extensive in the competition. Robbie Tarrant, Jaidyn Stephenson, Jared Polec, Luke McDonald, Aidan Corr, Aidan Bonar and Jed Anderson are the key players that the Roos will look forward to getting back eventually. The VFL side finished their recent game against Southport with just 17 players, highlighting how bad their injury issues are right now.

After being very positive in their previous two games, North Melbourne will look forward to the challenges that lie ahead. They play Hawthorn, Essendon and St Kilda before the bye in Round 12. These are all winnable games based on the way these sides have been playing this season. The Hawks aren’t in great touch after being beaten comprehensively by St Kilda and West Coast in their last two games, so the Roos have every chance to snatch their first win of the year this Saturday.

On the back of one win from their last 23 AFL games, it makes sense for North to be essentially the laughing stock of the competition. However, David Noble is rebuilding his side, and so the expectations must be kept low.

They’ve competed very strongly in the last couple of weeks, including against the Demons, the best side in the league at the moment, so it’s fair to say North Melbourne aren’t the easybeats almost everyone is making them out to be.