Scott Bailey
15th May, 2021
15
Join the conversation
Advertisement
Write for The Roar

The Sharks succumbed to their eighth loss in the opening ten rounds on Saturday night, in a controversial 32-22 defeat at the hands of South Sydney.

The club remains stuck in the bottom three on the ladder, having now dropped six straight in the Sharks’ worst streak since their drama-plagued 2014 season.

But even after sacking coach John Morris and with all that considered, the Sharks still sit just two wins outside the top eight.

And buoyed by a near comeback that showed his side had a “pulse” Hannay insisted all is not lost.

“There are probably five or six teams in the comp at the moment that are off and running.

“And the other ten or 11 if you like, are really trying to scrap it out for that bottom part of the eight.

“With so much footy left in the year, I think every team in that bottom bracket will feel like if we can figure it out sooner than the rest, we can make a run at this.

“We showed that form in the second half, it gives us reason to probably believe and hope that we can make a surge.”

Life still won’t be easy for the Sharks, however.

Shaun Johnson won’t beat a hamstring injury to face St George Illawarra next week, with Ronaldo Mulitalo the only man likely to return.

Andrew Fifita also picked up a suspected hamstring injury late, as he made an impact by breaking the line once and throwing the last pass for a try in his first game in the NRL this season.

The veteran prop made headlines on the eve of the clash by smashing Morris, after he was dropped to reserve grade to start the season and then picked up a suspension there.

“I wasn’t sure what we would get out of Andrew, he hasn’t played a game for a month,” Hannay said.

“We were holding our breath a bit.

“I thought he made a real impact. At that time we were on top which I thought helped.

“But I thought he showed some good signs out there.”

Someone should sign him up just for the boldness of this message! 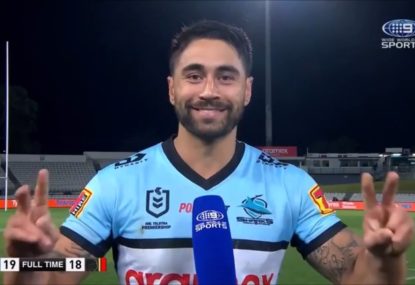 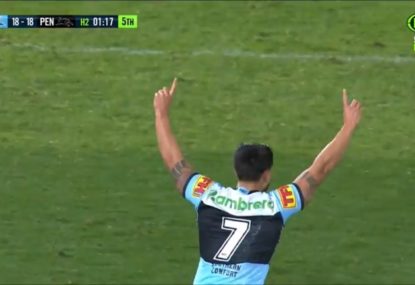 Worrying signs for the Sharks veteran… but great sportsmanship from the Panthers. 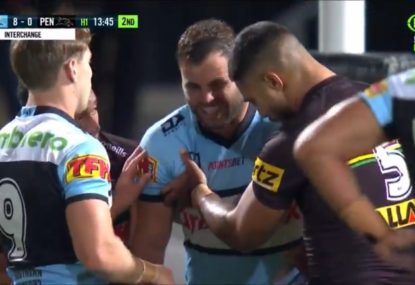