After Plowman's suspension, why be a defender?

Not for you is chopping of the arms free.

No, you not only have to mark the ball when contested but you also have to deal with everyone beating up on you when you elect to mark, whether in front or behind. But the forward gets awarded the mark for no other reason than he’s got better name recognition than you do.

Not for you is holding the ball. You don’t get the benefit of the doubt when someone tackles you. You’re held to the letter of the law, when your direct opponent is allowed a 720-degree turn while tackled before disposing of the ball, and you are left scrambling to cover that additional disposal.

And now, we’re told you are not allowed to spoil the ball.

I come, at last, to Lachie Plowman. 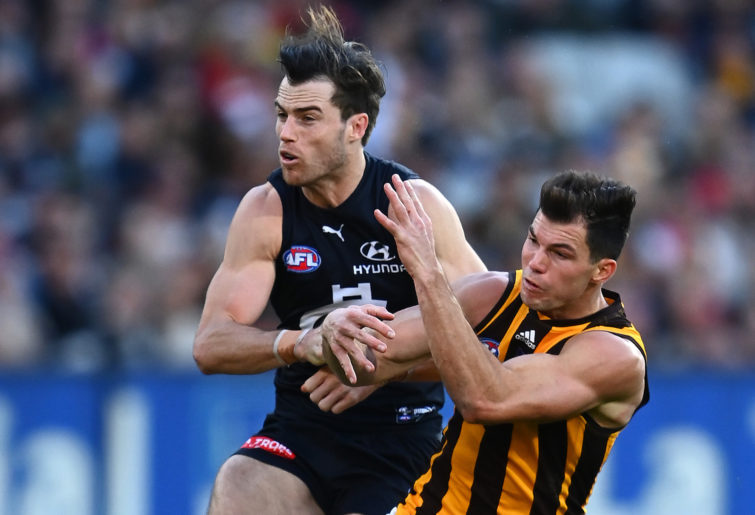 Lachie Plowman has been suspended for this incident with Jaeger O’Meara. (Photo by Quinn Rooney/Getty Images)

Take a good hard look at that footage. Tell me the specific frame in which he decided instead of spoiling the ball to elect to bump.

I’ll wait. Go on, give it your best shot, telling me precisely when it occurs. Tell me how his arm at the point of impact fails to touch the ball, the very point of spoiling the thing.

Tell me how fair it is that he’s got two weeks because the tribunal refused to overrule a bid by Michael Christian to restrict the behaviour of defenders further.

At what point do we draw the line and state, unequivocally, that the AFL is failing in their commission to “frame and administer laws relating to football and to take such action as may be necessary to achieve uniformity in such laws”, as the AFL constitution law 5 section C states?

How is there uniformity in this ruling? How is there anything resembling justice for Plowman or uniformity in adjudication here, considering how often such contact has not resulted in suspension? How many times does the result need determine the sentence before the AFL are actively in breach of their own constitution?

And now, you cannot make contact with an opposition player during a marking contest.