Can this NSW team win back the Origin shield?

With Queensland showcasing a never-say-die effort and true footy passion, NSW fans must often wonder how their players didn’t turn up. This pressure has been transferred to NSW Blues coach Brad Fittler, who has come under fire for his team selections.

It wasn’t the quality of the players that caused the issue with NSW fans. However, it was Fittler’s decision to choose players in unusual positions, such as the Dally M player of the year Jack Wighton (a five-eighth by trade) and Dally M fullback of the year Clinton Gutherson (a fullback for Parramatta) as his first-choice centres.

These decisions led to quite the uproar after their series loss and with Fittler’s job on the line fans will be wondering if he sticks to his ‘best players available’ selection choice or picks players off their natural positions.

1. James Tedesco
He is the first name on the team sheet and should be captain. James Tedesco is an incredible player and leader. His support play, experience and ability to organise a defence will be a key factor in deciding if NSW win or lose this series.

2. Josh Addo-Carr
Addo-Carr is another experienced player and incredible squad personality. His finishing ability and raw speed give NSW an option out wide that won’t disappoint. Addo-Carr will look to add to his ten tries in the Origin arena.

3. Tom Trbojevic
He is in career-best form, putting up insane numbers for his club side Manly. He is a personal favourite of Fittler and an out-and-out footy player. Trbojevic won’t let NSW down.

4. Latrell Mitchell
A contentious decision for many, is this the year Mitchell returns to the Origin arena? His ability to break a game open puts him in front of the other centre options, though Fittler will have to learn to control Mitchell’s brain snaps if the Rabbitohs’ star man is to have an effective series.

5. Daniel Tupou
Tupou is a class defender and a tall body, and Fittler will feel comfortable having him battling in the air against Xavier Coates. A strong runner of the ball and an experienced big-game player, Tupou checks all the right boxes.

6. Jarome Luai
The Panthers’ combination in the halves seems to be one of the easier choices with Luai and Nathan Cleary dominating the league. With this combination, NSW might have a pairing they can use for a long time.

7. Nathan Cleary
Cleary has been one of the best if not the best player in the NRL this season and his kicking and game management will be crucial if NSW want to win the series this year.

8. Payne Haas
The Broncos’ metre eater starts in one of the two props spots and will bring enthusiasm to a pack that was beaten last year. Haas will look to reignite his battle with Tino Fa’asuamaleaui. He is potentially in doubt with a knee injury suffered against the Storm on Thursday night.

9. Damien Cook
Cook has some competition for his Blues jersey this year owing to his own poor form and Api Koroisau’s combinations with the aforementioned halves paring. However, Cook always seems to step into gear for the Blues and his own representative combinations with Tedesco and Cleary push him over the line.

11. Ryan Matterson
Perhaps one of the luckier inclusions in the squad, due to a mixture of injury and suspension, Matterson is bought into the starting pack. Solid run lines and edge defence put Matterson as a solid replacement for the suspended Angus Crichton.

12. Tyson Frizell
Frizell is a performer and a constant threat for the Blues, be that from his damaging runs or consistent effort, he is one of the few players whose club form you don’t consider. Frizell will do the job in the second row for NSW.

13. Jake Trbojevic
The oldest of the Trbojevic brothers, Jake’s ball-playing ability and defensive acumen are a key cog to this NSW machine and his link-up play with brother Tom will be one of the many dangerous combinations NSW can utilise. 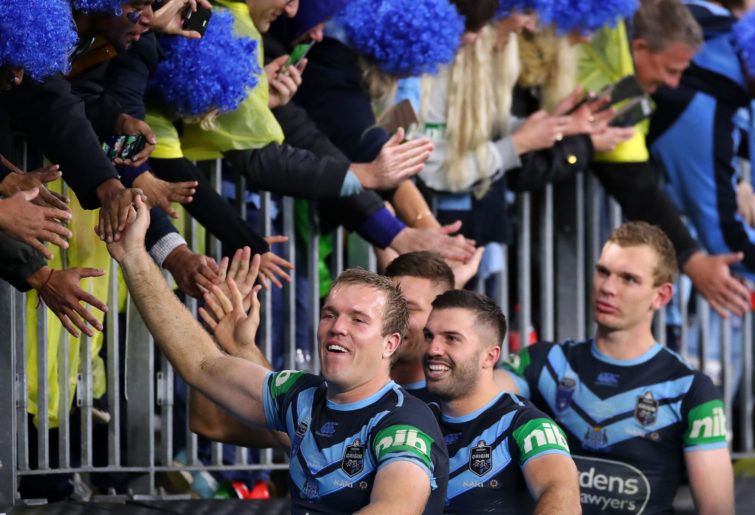 14. Jack Wighton
Wighton’s versatility places the Raiders’ star man in the 14 jersey, with options to come on across the park and bring a big body off the bench. He has the potential to cause some real problems off the bench.

15. Isaah Yeo
The Penrith lock came into Game 3 last year at centre when Gutherson was moved to cover Tedesco. This year Yeo should have the ability to come off the bench and bring in another dangerous combination with Cleary and Luai.

16. Tevita Pangai Jr
An outside bet for many, however Pangai has been playing excellent footy in an improving Broncos side and his X-factor off the bench can overturn games. Pangai is also known for making personal battles with his opposite. Expect plenty of passion from the big man off the bench.

17. Daniel Saifiti
The Newcastle enforcer rounds out the bench and forms an explosive prop rotation alongside both Haas and Paulo. Saifiti has been consistent for the Blues and adds another big body to NSW’s pack.

18. Clint Gutherson
The Eels captain is versatile and did play out of position last year, however his body isn’t as big as Wighton’s while he also has less Origin experience, so he loses out on the 14 jumper.

This group of players are unlucky to miss out due to a number of reasons and will definitely be considered options for Fittler if Game 1 doesn’t go according to the Blues’ plan: Brian To’o, Reagan Campbell-Gillard (who will be moved to bench with Saifiti starting if Haas is out), Ryan Papenhuyzen, Cameron Murray, Liam Martin, Stephen Crichton and Angus Crichton.