Shayne Hope
30th May, 2021
44
Join the conversation
Advertisement
Write for The Roar

After the Tigers’ 28-point win over Adelaide in Sydney on Sunday, Hardwick said his side will stay in the harbour city this week and travel to Western Australia on Friday before tackling the in-form Bombers in round 12.

The Dreamtime fixture was originally scheduled to return to the MCG after being played in Darwin last season.

But Victoria’s ongoing COVID-19 battle means it will now be held in a third city in as many years, in a move confirmed by the AFL on Sunday night.

Essendon are flying after an upset win over West Coast at Optus Stadium on Saturday night extended their winning streak to three matches.

The Bombers sit just one win behind eighth-placed Richmond heading into their crunch clash.

“We want as many fans there as possible, not only for the game in general, but hopefully our Tigers can celebrate with us as well,” Hardwick said.

“We’ll head over there Friday and give it a crack against a very good, rampaging Essendon at the moment.

“They’re one of the form sides of the competition at the moment so it’s going to be an enormous challenge for us.” 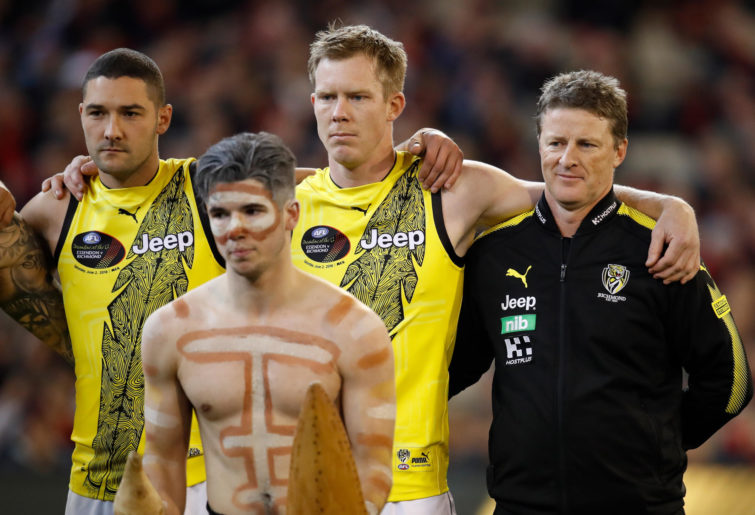 Shaun Grigg, Jack Riewoldt and Damien Hardwick of the Tigers look on during the war cry during Dreamtime at the G. (Photo by Adam Trafford/AFL Media/Getty Images)

“It’s such an important occasion, one of the big ones for our footy club, so I’ve got no doubt the people will get behind it and support it,” Hardwick said.

“Whether it’s Richmond or Essendon fans, we just want as many people there as possible to celebrate our Indigenous players.”

The move means Melbourne is likely to be without an AFL match in round 12, with the AFL set to confirm the revised schedule as soon as Monday.

Carlton will host West Coast at the SCG instead of the MCG and the St Kilda-Sydney contest, scheduled for Marvel Stadium, could also be moved to Sydney.

It would likely mean the Saints and Swans switch hosting rights for their two meetings this season, with a return clash already booked for round 21.

Friday night’s encounter between ladder leaders Melbourne and fellow flag contenders Brisbane is likely to be moved from Alice Springs to Sydney or Queensland.

There is also uncertainty around Adelaide’s clash with Collingwood on Saturday night, with the AFL seeking exemptions for the Magpies to fly in and out of South Australia on game day.

“It’s not locked in as yet, so we have to wait on the AFL to give us more information,” Crows coach Matthew Nicks said.

“We’re planning for a Saturday game in Adelaide … but we’ll be flexible and ready to play wherever need be.”

The Western Bulldogs had their travel plans changed at the last minute on Sunday.

Instead of flying to Perth ahead of Sunday’s clash with Fremantle, they were sent to Sydney, where they will live under Victorian lockdown protocols before heading to WA on Saturday.