Melbourne coach Simon Goodwin will target improving his team’s ball use during a timely bye for the AFL ladder leaders following a shock defeat.

The Demons were held to their lowest score of the campaign, tallying just. 9.9 in a 17-point loss to lowly Collingwood at the SCG on Monday.

A lack of execution also left Goodwin seeking a reset and improvement after next week’s bye.

“After a result like that I think the bye has come at a pretty good time for us,” Goodwin said.

“We need to acknowledge where we sit, we’ve had a brilliant first half of the season, we’re 13 rounds in, we’re 11-2 and we sit in a pretty healthy position.

“I’ve spoken to the players, we need to use this bye in the right way to refresh, mentally, physically and we need to make sure we find a way to improve in the back half of the year.

“That’s the challenge for every team. We’re far from the finished product, we need to continue to find ways to improve and get better.

“Whether that be through personnel and method … we know we’re going to be challenged in a lot of areas.

“The bye gives us a chance as a coaching group and as a playing group to reset, acknowledge where we sit, but also build a plan in the second half of the year.

“I think we learnt today that our ability to use the ball effectively is an area we need to get better at.

Jack Viney, who hasn’t played since round six because of a toe issue, could be available after the bye.

He will participate in internal match simulation next Saturday after the players return to training from a four-day break.

“He’s building really nicely. Whether he’s right for the next game we’ll wait and see, but he’s full steam ahead and progressing well,” Goodwin said.

With Melbourne fast closing the gap, the Dogs’ number one draft pick missed the target completely the first time – but was impressive when given another chance soon after. 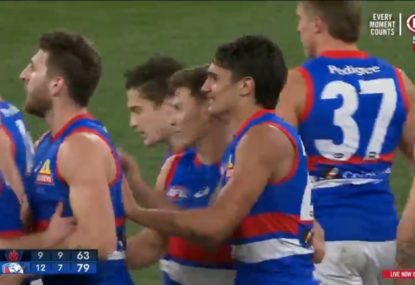 The Dogs young star used Max Gawn as a step ladder to put in a Mark of the Year contender. 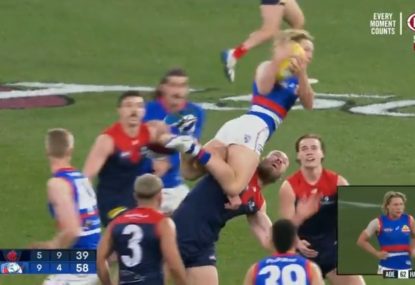 The Bulldogs forward was fired up after extending his side’s lead before halftime. 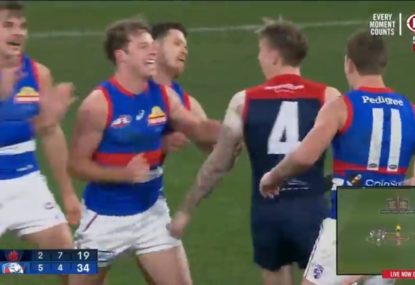 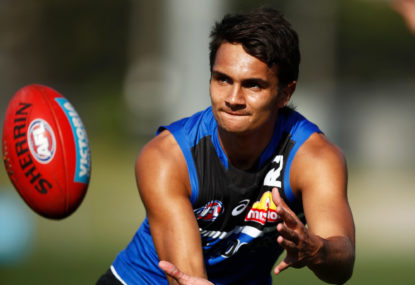