The tipping panel is done for another Super Rugby season, but the panel is by no means done for the 2021 rugby year. With the July Internationals and a Lions Tour upon us, we’re only just getting started.

A snappy new name for a format you may well remember; the quick questions have served us well at this end of the season for several years now, and who are we to break a winning combination?

So we’ll be going around again, albeit one member down with this week’s departure of Dan Jeffrey from The Roar.

Naturally, we’ve all deleted his number now that he’s turned his back on the Panel.

But, in some positive news, we’re hopeful of adding the one missing component from the Panel ahead of The Rugby Championship, so stay tuned.

Onto the two-up questions in a moment but first, let’s tie up the tipping loose ends.

LAST WEEK: Harry, Geoff and The Crowd were on the Blues; Dan, Digger, and I weren’t.

Question 1: What was your highlight of the Super Rugby season?

Harry
James O’Connor scoring a try at the death in the Super Rugby AU Final.

It also came at the exact moment I had some sort of allergic attack; the kind that makes your eyes well up, your heart leap for joy, and the ancient human yearning for redemption find its home.

The Brumbies bravely hanging on against the Reds in the AU final, until sheer weight of numbers and a sense of ‘it’s time’ finally willed the ball out to James O’Connor, for him to bury the ‘amigos’ tag once and for all.

Billy Harmon, not the captain, calling a captain’s challenge for foul play on himself by Dane Coles, when it was actually him who started it all. What on earth was he thinking? That the cameras had been switched off just for those few seconds?

And also from the shame file, Stan/Nine, not for coverage of the Force v Chiefs match turning to custard, but for pretending it never happened.

Digger
There were a few. The thrilling conclusion at Suncorp certainly needs a mention, along with a rejuvenated Chiefs side in Aotearoa and a gritty, never say die Force in Australia.

Not to mention the sheer abundance of talent across the loose forwards right now; I can’t personally recall so many quality options running about and my personal favourite, TOM Robinson, who brings a different perspective to after match interviews, making them a much watch affair.

As cheesy as this will sound, my main highlight was the Highlanders beating the Crusaders, quite well really in Christchurch.

Why? The week preceding the game, with all the peripheral issues dictating a weakened side, written off from pillar to post, it was a magnificent performance and reminded me that Rugby is very much a team game and a well-coached and determined side can achieve great things against the longest of odds. Just marvellous.

Brett
I think from an Australian perspective, it’s really hard to go past how quickly it became obvious that the second season of Super Rugby AU was anything but boring, and how quickly the goodwill of casual and regular rugby fans just blew up like we haven’t seen in years.

Heading into the final rounds, the finals equations meant there was something at play from every game, and it climaxed in incredible fashion for the Final in Brisbane.

And then the Final kicked off, and it became another thrilling Reds-Brumbies encounter and finished with another after-the-bell thriller, and an aggregate margin across the three games this season to just seven points.

Obviously, it was moved on from and even forgotten about a bit too quickly for my liking, but it was the clear highlight of the Super season for me.

Question 2: What’s the logical way forward for Super Rugby in 2022?

Harry
New Zealand and Pasifika need the Australian and Japanese markets; but cross-conference matches are mismatches, at present.

The solution seems to eradicate the barriers for all; so that a young Kiwi playing in Sydney or Brisbane is just as eligible as playing in Dunedin for All Black selection and contracting. A closed system, but 100 percent free within.

Aussie billionaires need to become the new French owners. The only way Super Rugby can gain market share is using the two richest countries in the applicable areas.

Geoff
Assuming Fijian Drua are added to Australia and Moana Pasifika to New Zealand, look for one round of Super Rugby AU/Aotearoa (5 weeks), one final (1 week), before one full found of SR TT (11 weeks) plus semi-finals and final (2 weeks).

That’s 19 weeks of rugby, which is tight and leaves no room for any kind of ‘champions league’ interaction with Japan at this stage.

If that becomes a goer, then something else will have to give, and the dreaded conferences might be back on the table.

Digger
Well, assuming we all still get along and come to an agreement then the logical solution would be to play a straight round robin with the addition of the new Pacifika sides.

It seems the only practical way to move forward under current circumstances.

Brett
The fact that we’ve all said something different here makes it rather unsurprising that there’s a bit of uncertainty about the way forward even just within Rugby Australia, never mind between RA and New Zealand Rugby.

I think RA are really torn on this, and I’m sure there will be a strong push toward maintaining some form of strong domestic competition among the Australian sides.

But the idea I’ve really warmed to in recent weeks is to play a full trans-Tasman competition as remains the main desire on both sides of the ditch, and with a view to adding in some type of Japanese involvement either in 2022 or more likely 2023. 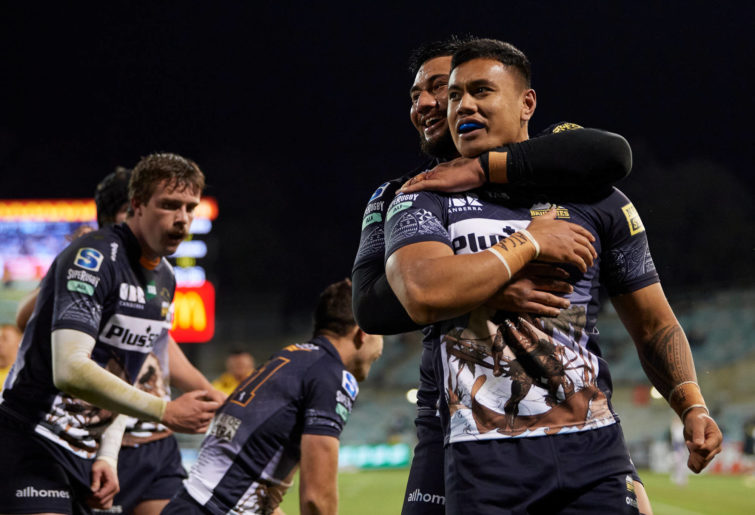 And then once the international season gets underway, that’s the time of year to play Super Rugby AU. While it’s nice to see the NRC being discussed again, I really do think the easiest, cheapest, and least offensive way to create another tier of rugby development would be to use the existing five state teams and their existing structures.

Add a sixth team, perhaps an Australian Barbarians arrangement if it’s doable, and run a full home and away series while the Bledisloes and Rugby Championship Tests are being played. Call it the NRC, the ARC, the APC, find the old 1990s Ricoh Cup; call it whatever you like.

But it’s known teams with known rivalries providing a much better level of rugby for the contracted players and the injured and fringe Wallabies not in the Test matchday 23 than any confected national club set-up is going to.

I genuinely think that might just be the best way to get everything done in a way that suits the majority of needs.

OVER TO YOU: What were your Super Rugby highlights for 2021?

And what is the best way forward for the competition next season?