The fortune of draft picks they have amassed is truly something to behold. General manager Sam Presti has mastered the art of negotiation, taking on the worst contracts and flipping any player of value to add to his hoard. Players such as Chris Paul, George Hill and Al Horford have all come and gone, each time fetching more draft consideration. While having an endless supply of draft picks and swaps is great in theory, there comes a time when assets must be converted into success.

Heading into Tuesday’s draft lottery, the Thunder held the fifth-worst record in the league as well as the draft rights to the Houston Rockets’ pick if it was to fall outside the top three. As the Rockets held a similarly abysmal record, this meant Oklahoma City had a great chance to walk away with not one but two top-five picks in the 2021 draft. As it happened the Rockets landed at number two, holding on to what will be a precious pick in a highly-rated draft class. The Thunder meanwhile fell down to sixth, an overall disappointing result all things considered.

The class of 2021 is widely believed to be the best class of potential rookies in over a decade, rich with talent throughout the lottery and even towards the back of the first round. The top five, unsurprisingly, have garnered the most attention.

Most draft boards have agreed to a consensus top five which include Cade Cunningham, Evan Mobley, Jalen Suggs, Jalen Green and Jonathan Kuminga. While Cunningham has stood out as the favourite to take the top spot, each of these players have number one potential in their own right.

So that leaves the Thunder, sitting at number six, on the outside looking in. So here is the question: is now the time for OKC to cash in their chips? Making the jump from sixth into the top five should be a priority for Sam Presti and if you look closely there may be genuine trade possibilities he could chase.

Will the Houston Rockets at number two be willing to risk pairing another big man in Evan Mobley with Christian Wood? Or do the Cleveland Cavaliers take another guard at number three in Jalen Suggs or Jalen Green to go with their already undersized backcourt? Both teams may consider moving down if it means they can gain an extra pick, either now or in the future, rather than risk making the wrong selection based on the best player available.

The Thunder have one future all-star in Shai Gilgeous-Alexander alongside a number of raw prospects including Darius Bazely and Lu Dort. 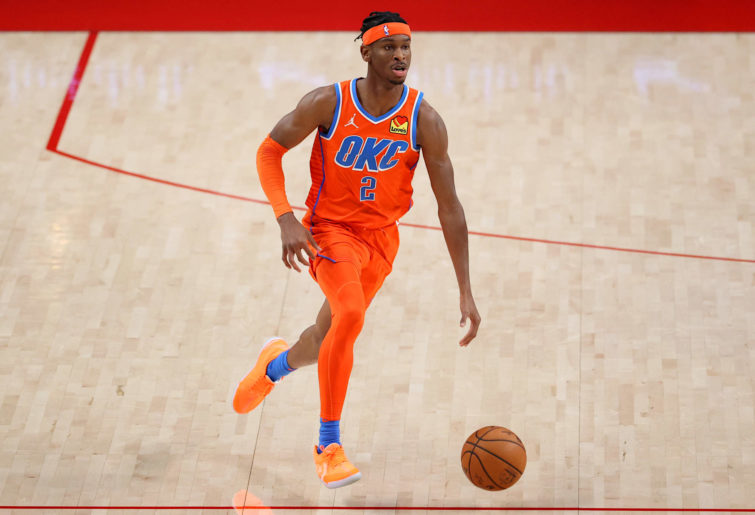 The opportunity to move up the board and draft any one of Mobley, Suggs or Green would be massive for them. It is for this reason Presti must be willing to spend at least some of his hard-won assets to make this a reality. These high-calibre rookies do not come around often and if they do not find someone they love available at the sixth position, this kind of move is a no-brainer.

A great example of a team moving up the board successfully was the Atlanta Hawks in the 2019 draf, when they packaged the eighth and 17th picks for the fourth pick, allowing them to draft Deandre Hunter. Hunter has gone on to become a vital part of an exciting young core in Atlanta, who are currently in the Eastern Conference finals. Following this example, a potential trade Oklahoma City could make is a package of their sixth and 16th picks for either the Rockets’ second or the Cavaliers’ third pick.

Either deal would give them access to a minimum of two of the previously mentioned players.

While the Thunder are in no rush to win now, this draft may be their best chance to convert some assets into success. This kind of move could help them make the leap further down the line and would only cost them a small fraction of their current fortune.