It was late in August of 2017 and the Warringah Rats had suffered the unimaginable: the death of popular fifth-grade player Lachlan Ward.

As Coleman presented a jersey to Lachlan’s brother and Warringah club captain Sam ahead of their grand final with Northern Suburbs, Coleman uttered words Ward will never forget.

For Ward, it’s indicative of Coleman’s strength as a coach: he cares.

“He was in tears talking about me to the group. It shows how invested he gets in his players; how passionate he is about what he’s doing,” he said.

“That was the special part about ‘DC’ in my rugby experience.”

Now Coleman has been tasked with elevating NSW Waratahs out of the worst funk in state rugby history. The appointment has been met with great positivity in clubland – he’s coached at five Shute Shield teams and is something of a local hero. And after thirteen losses on the trot and dual wooden spoons in local and Trans-Tasman Super Rugby, the only way is up, right? 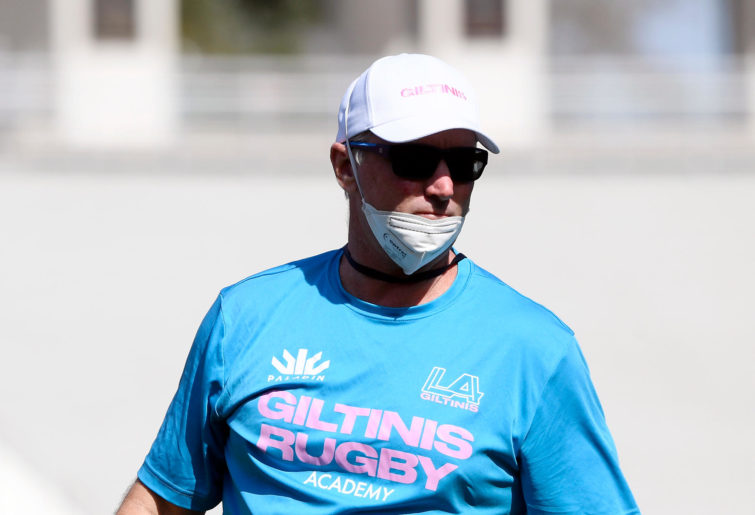 Darren Coleman looks on during his time as head coach of the LA Giltinis. (Photo by Harry How/Getty Images for LA Giltinis)

You wonder, though, what Coleman can do that Rob Penney could not. Penney was given stewardship of an inexperienced squad missing Michael Hooper, among others, in 2021. A squad which knew injury, as every club does. Yet despite drawing on the biggest playing base in Australia, with a metropolitan club competition among the best in the world, NSW somehow lacked depth.

Out the door Penney went – and the Tahs continued to lose.

Yet Coleman has form lifting lost causes to glory. His special sauce took the Rats from the wasteland to a premiership in 2017, and Gordon Highlanders from a wooden spoon in 2018 to premiers two seasons later.

Cynics will tell you it’s because of the players he brought in. Ward says it’s another of the man’s strengths.

“Being able to recruit people, being able to get people to a club and to play the way you want them to, that’s a drawcard,” he said. “I don’t see anything wrong with that. Recruitment is a skill. And getting guys together and keeping them together, and buying in – and doing it quickly – it’s a strength.”

Ward argues that there’s more to it, anyway.

“Even if you get good players to come to your club you still have to get them to play well together and to buy into the greater goal,” he said.

“It’ll be slightly different in a more professional setup but not that much. There’s no reason he can’t do it again.”

All rugby coaches, certainly those at professional level, have access to the same technical know-how, the same sports science and GPS data, and all the other bells and whistles of the highest level. Ward says Coleman’s knowledge and ability to impart it to individuals – with a view to improving that individual – sets him apart.

“At Warringah, we were a bunch of good players, we just needed direction,” Ward said. “And he came in and showed us how to play the game in order to win. He brought a different level of professionalism. He showed us how to get the best out of ourselves. He did the same with Gordon.”

So yes, the only way is up.

Yes, Coleman has had success with Gordon, Warringah and in 2021 Los Angeles Giltinis, the US Major League Rugby franchise that’s leading the competition with 11 wins from thirteen starts. But gee – thirteen and oh, right? You wonder what he can say to those incumbents and, particularly, to those he’d bring into the fold. What’s the sell? What is the Coleman special sauce?

According to Ward, it’s simple – he makes players believe.

“He’ll be selling the culture of the club, on and off the field. Trying to build a culture in a club is a big thing. I’m not saying the Waratahs have a bad one but they haven’t been winning. So you have to sell players on the vision for the place and for the individual.

“Bottom line is guys believe him. And believe in him. If you don’t believe what the coach is telling you you’re not going to get aboard. Players buy into what DC is selling.

“He’s a great appointment for NSW. He’s purpose-built for the job.”